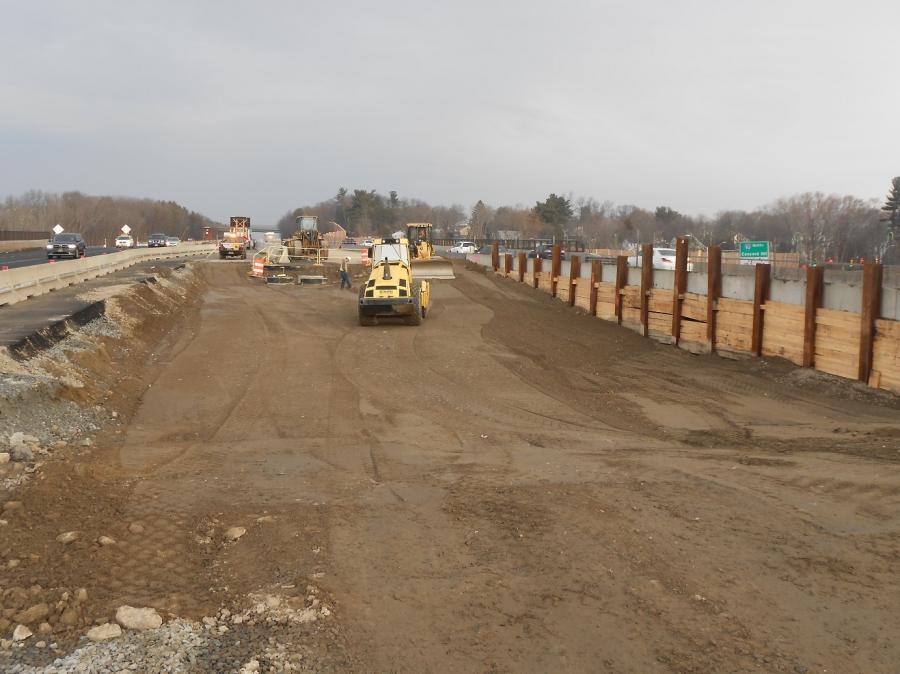 E.T. & L. Corp., based in Stowe, Mass., was awarded the $66.4-million dollar Methuen Reconstruction Project, and they have experience working on rotaries for MassDOT. (MassDOT photo)

The new partial cloverleaf interchange at Exit 46 off I-93 in Methuen, Mass., is taking shape with the recent completion of the southbound off-ramp onto Route 110/113 and construction under way on the northbound off-ramp to westbound Route 110/113. With the four-year project now in its final year, the reconstruction is already proving its worth with traffic now flowing smoother through the area.

Originally designed in the 1950s for a much lower volume of traffic, the Methuen rotary proved unable to handle the increasing volume of traffic in recent years, especially during what Jeff Lavallee, resident engineer of the Massachusetts Department of Transportation (MassDOT) described as “severe peak-hour congestion, which resulted in failing levels of service overall for critical movements within the rotary intersection.”

In 2003, the Merrimack Valley Planning Commission identified the Methuen Rotary as being deficient, and five years later, MassDOT completed its own study and confirmed the earlier findings. One of the statistics used to demonstrate the interchange's deficiency was the crash rate being 7.5 times higher than the statewide average.

Given the rotary's proximity to neighborhoods and it being a heavily traveled route, MassDOT held a series of study advisory committee meetings and also public information meetings while completing their study. Of the nearly 20 alternatives proposed to replace the rotary's design, the partial cloverleaf was selected as the final design and improvements would be made along Route 110/113 that would include new sidewalks, the addition of bicycle lanes, and new signals at key intersections. This design was a collaboration between MassDOT and the Boston-based office of Jacobs Engineering and would have a price tag of $66.4 million.

Although the design was selected in 2009, other project elements, such as sound barriers and wetland mitigation, continued to be finalized, and construction finally began in July 2014.

E.T. & L. Corp., a heavy construction and infrastructure contractor based in Stow, Mass., was awarded the contract.

“It's what we do, we've been doing it for 73 years here in Massachusetts,” said Garry Balboni, vice president of E. T. & L., as for why his company bid on the project. “Constructing roads, interstate highways, bridges. It's our kind of work.”

This isn't the first rotary that E.T. & L.'s crews have removed for MassDOT; a few years earlier, they removed a rotary down at the Sagamore Bridge down at Cape Cod, which Balboni said “was very similar to this one.”

“MassDOT as a whole and E.T. & L have experience with this type of work,” Lavallee added, “And working together has been beneficial for both of us.”

David Conroy, the MassDOT area supervisor of the project, said these milestones included “full beneficial use, which basically means giving the roadway back in its full configuration to allow for a full volume of traffic, including break-down lanes and full-width on-ramps and off-ramps.”

The work was parceled into four phases, and crews are currently transitioning from Phase 3B to 3C. In addition to constructing on- and off-ramps from I-93, the project also called for the construction of a new 300-ft. bridge to replace the two bridges that currently carried I-93 over Route 110/113.

One innovation on the project that Balboni is proud to share is the use of intelligent compaction.

“It's a pilot program that MassDOT initiated at the request of the Federal Highway Administration,” he explained. “All the compaction on the mainline and the new ramps have been done using modern vibratory rollers with GPS technology and instrumentation that monitors the impact of the roller into the ground and the resulting rebound. It gives us an indication not only of the amount of compaction, but in the locations that the machine has passed. It's something that's new that's being done in pilot programs around the country and this is one of the first in Massachusetts.”

Operators have reported welcoming these new telematics tools in the cab, and Balboni sees the potential in quality control by having these real-time results because it means the area is not over-compacted.

“Once you train the operators, and you can train them fairly quickly, they can all do a first-class job, even a young apprentice,” he said.

With a little more than a year left before the completion deadline, Masucci said they are on schedule or a little bit ahead.

“The key for us so far is to try to complete a stage in the time of the year when you can install asphalt paving,” he said. “We've been able to do that so far.”

This is welcome news to the drivers and the neighbors who have had to navigate through and live next to a construction zone for the past three years. In spite of the public concerns about noise during the night and the project design, Dan Fielding, the public and legislative liaison for MassDOT said “I've heard nothing but positive things. That's a credit to the project team out there and the contractor.”

And this is praise that Balboni seconds: “This project is successful because we work as a team — Dave and Jeff and the crew [at Jacobs Engineering], and E.T. & L. folks work together. We have weekly job meetings. We get answers quickly when we need them. And that's what you need to get a big job like this one done successfully and done on time or early.”

With the project steadily approaching completion, MassDOT also recognizes the benefits of the collaborative efforts everyone brought to the project.

“We thank everyone who has played a role in this project, the designers, planners, MassDOT personnel, contractors and our law enforcement partners,” said Thomas J. Tinlin, MassDOT highway administrator. “And we would like to specially thank our customers for their patience as we continue this important work and improve this roadway.”