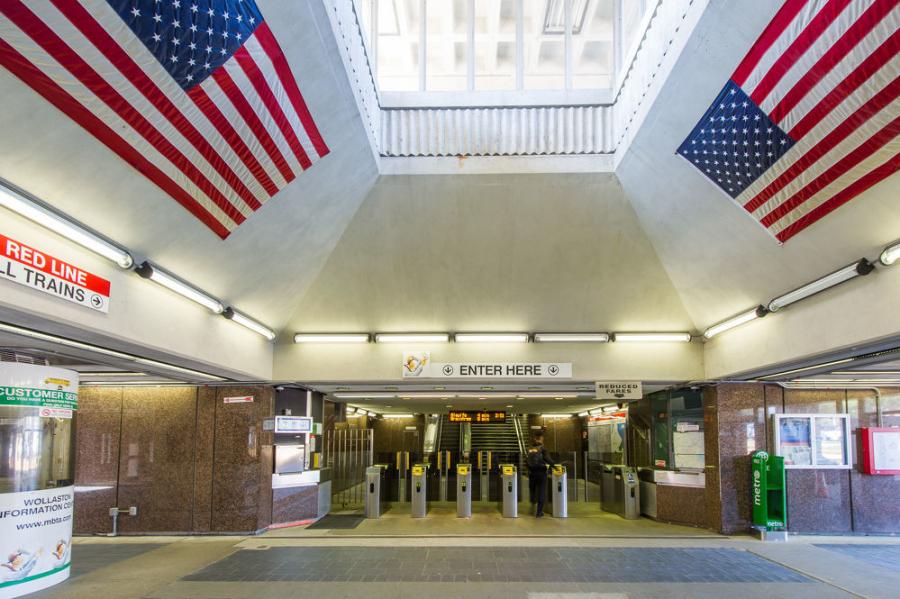 The only non-ADA-accessible station on the Red Line, Wollaston will be transformed into a more modern facility. (MBTA photo)

As part of a nearly billion-dollar investment to improve the South Side Red Line, work is under way on a $50 million renovation of Wollaston Station in Quincy, Mass. Major accessibility improvements, safety features and parking lot site improvements are among the changes being made.

“The Wollaston Station improvement project will be of value to all Massachusetts Bay Transit Authority [MBTA] Red Line customers, but especially those who have physical disabilities,” said Brian Howland, MBTA resident engineer. “This will be the first time in almost fifty years that a person with disabilities who is unable to use existing stairs will be able to use this fully accessible station. The station upgrades also add an easier and more spacious interior, as well as an easier flow and comfort for all customers.”

The only non-ADA-accessible station on the Red Line, Wollaston will be transformed into a more modern facility. New features and upgrades to the station include three new elevators and two new escalators, as well as additional customer paths to/from the new station, including two extra stairways. New bathrooms and energy efficient lighting will be included, along with new electrical, fire protection, security, flooding mitigation and site utility upgrades.

“Wollaston Station opened in September 1971 and hasn't had any major renovations since. The station was physically in disrepair, with the existing concrete main stairs and platform edge spalling, and the lack of proper storm water management causing frequent flooding in the lobby. The escalator was a very old model and well past its prime for dependability. Station lighting was also lacking full illumination. The station was difficult for those with physical disabilities to climb the stairs, and completely inaccessible to those who depend on elevators for vertical transportation.” 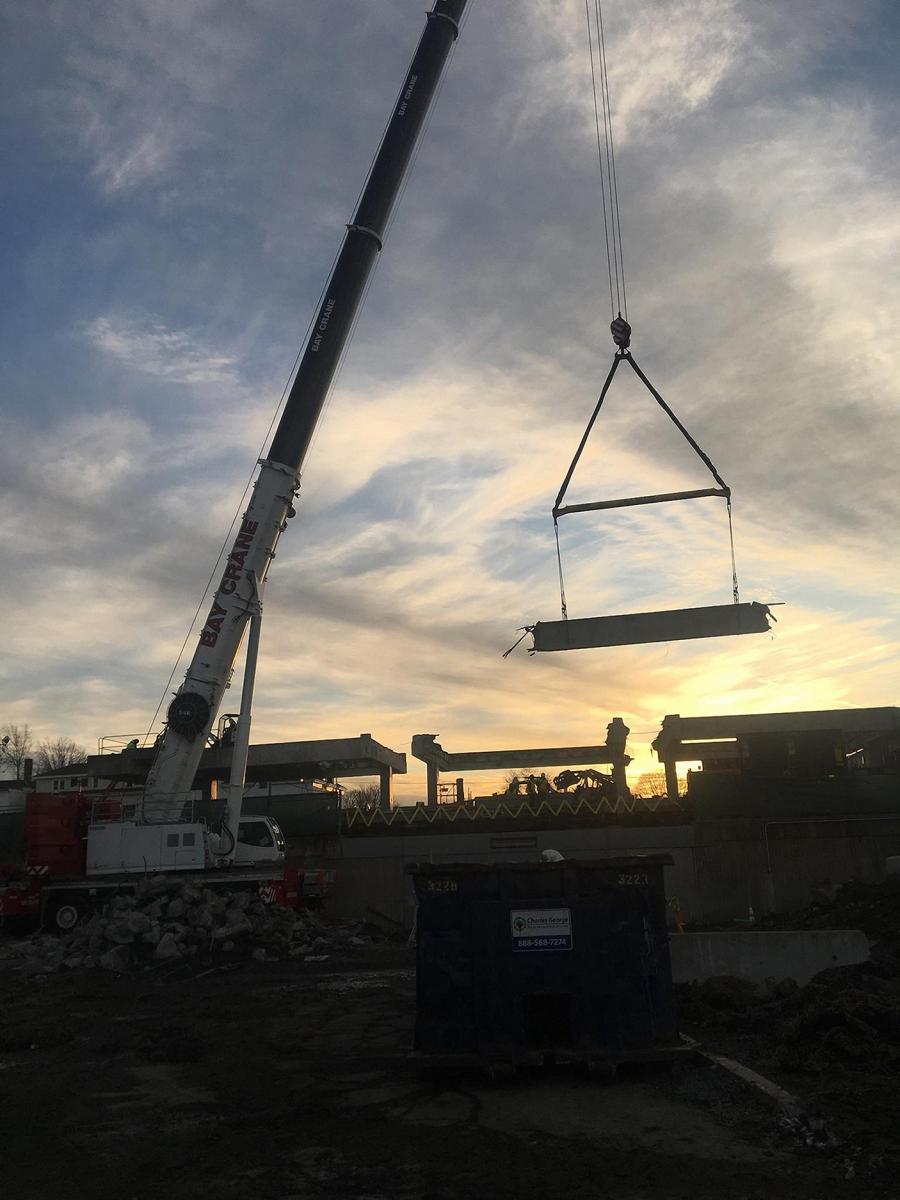 Crews are working day and night to carry out the work.

“Although the station itself is closed, Red Line trains do run through the station in the north and south directions. Because of this constant running of Red Line trains, any work that requires lifting over the track, work on or near the track or work that has the potential to foul the track must be completed during hours in which the subway system is closed for the evening. An example of this type of work would have been the demolition of the track platform edge.”

According to Howland, the project design will have a major impact on the look and interaction with the surrounding neighborhood.

“The design has a new elevator shaft that's going to be approximately 50-feet high from the parking lot side, making a physical statement of the entrance and location. The interior lobby is going to have two elevator locations, with three stairs that access the elevated platform, making access to the platform much more comfortable and safe. The surrounding site is going to have dozens of new trees, bushes and sidewalks that will make the area more inviting and easier to navigate.”

Howland noted that the live third-rail track and short schedule are the greatest challenges on the project.

“Current construction-related issues are the heavy clay soils and the mini-pile installation. Because the drilling process requires water for the drilling, managing the water that is part of the drilling process has become difficult, because of the clay soil not being able to be absorbed directly into the ground. The general contractor has had to manage this process with recirculating tanks and pumps that reuse the water, rather than ponding the water for distribution into the soil.”

The project was awarded in June 2017, with the building permit issued in late October. The project has a schedule deadline for a 20-month shut down, with Wollaston Station completely closed to the public as of January 2018.

Crews are completing the mini-pile installation at the main headhouse of the station, along with the excavation for pile caps and grade beams. Workers are installing a new water main connection, a sewer bypass and CIPP lining, as well as mini-piles at the new platform stairs.

Crews are demolishing the station lobby by hand and with the use of mini-excavators and skid steers. For the stockpiling and removal of soils, space on site is limited. Soil stockpiles have been consolidated to maximize space.

Howland said weather has already been something of a concern.

“The recent heavy rain and wind has caused some damage on site, but snow and cold have not been an issue this year.”

Foundation work for the station's main headhouse is not yet complete. Crews also must finish installation of the structural steel at the main headhouse and complete new stair #6, escalator and elevator locations.

With no major renovations or changes made in almost half-a-century, the street lighting, curbing and pavement were all in need of replacement. Most of the existing trees were damaged or nearing their life expediency. Storm water control was non-existent, or not in good shape.

Regarding early preparation, construction on the parking lot side has a greater work zone, which enables the contractor ease of equipment movement and stockpiling of material. The work zone on Newport Avenue, however, will require greater coordination and phasing.

Howland said the buildings that surround the parking lot and neighborhood were documented and became an important reference point for scale and material decisions for the new station. Other recently completed MBTA stations were visited to ensure that the material palette of the new station would complement the MBTA's existing infrastructure.

“The chief concern was coordinating the staging and phasing of the physical and functional improvements to the station while the Red Line remains in service. This has resulted in off-hours construction, and several weekend shutdowns of Red Line service to coordinate the construction activities that have the potential to foul the track.

“The most challenging part of the coordination was to ensure that input received from the public was given proper consideration, so that adjustments to the design could be implemented without derailing the overall design sequence,” said Howland. 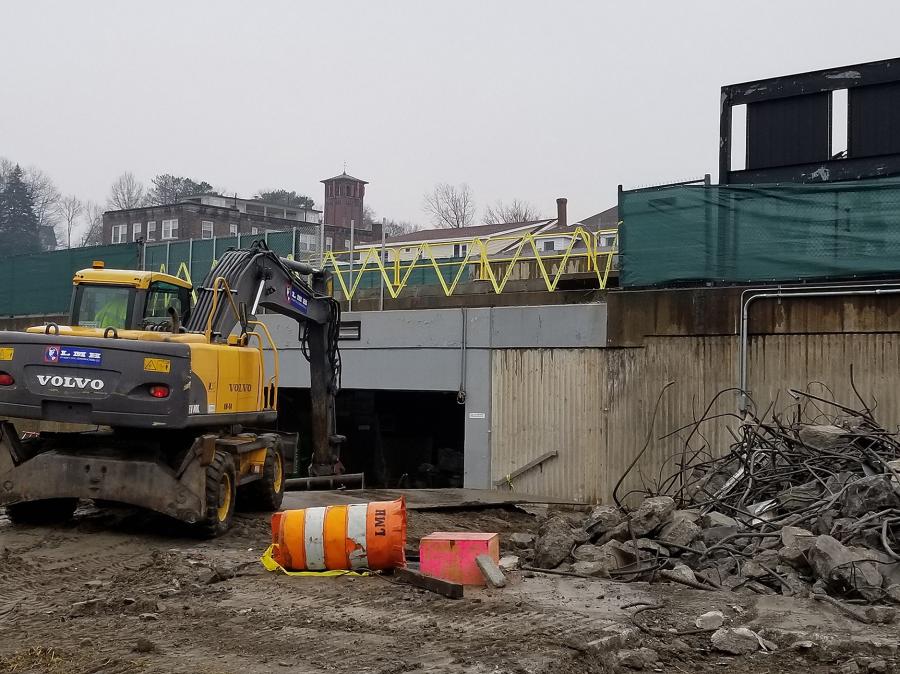 Excavation for platform footings involves coordination of trades to be sure any conflicting utilities are installed prior to placement of concrete.

“The work will be done at night during early access, to avoid issues with trains,” said Howland. “Early access diversions occur when a number of stations are closed to passengers earlier than normal hours [typically around 9 p.m.] with dedicated shuttle bus service provided instead. During early access, trains don't pass through the closed stations and work crews have unencumbered access.”

Crews also must place a liner in an existing sewer.

This involves coordination with the city and local residents impacted by temporary sewer bypass. Existing sewer will need to be cleaned and shut down prior to installation of the liner. The liner involves installing bypass pumps and hoses to divert the existing sewer for the liner installation. Liner is a polyester felt tube that is pulled from one SWMH to the other and, once installed, is in place to form a new inner sewer line.

The most time-consuming part of the construction includes the interior work in the station, including systems such as electrical, communication, security systems, tile and MMA at the station platform. All are considered very labor-intensive activities.

The project is funded by a Federal Transit Administration (FTA) grant and a state bond. Current spending to date is approximately $6.5 million.

Also known as “The T”, MBTA is the public agency responsible for operating most public transportation services in Greater Boston.

MBTA is overseen by the Massachusetts Department of Transportation Board and the Fiscal and Management Control Board.