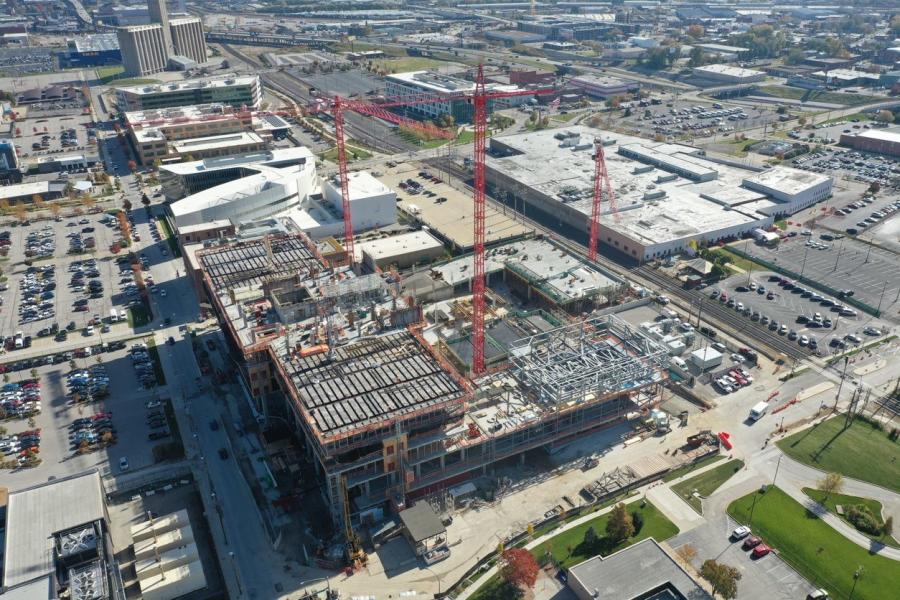 Washington University School of Medicine's neuroscience research building, expected to be one of the largest in the nation, is taking shape in St. Louis. McCarthy Building Companies is the lead contractor for the $616 million research center construction. Jared Hamel, project superintendent of McCarthy, said the first researchers are scheduled to move in summer 2023. 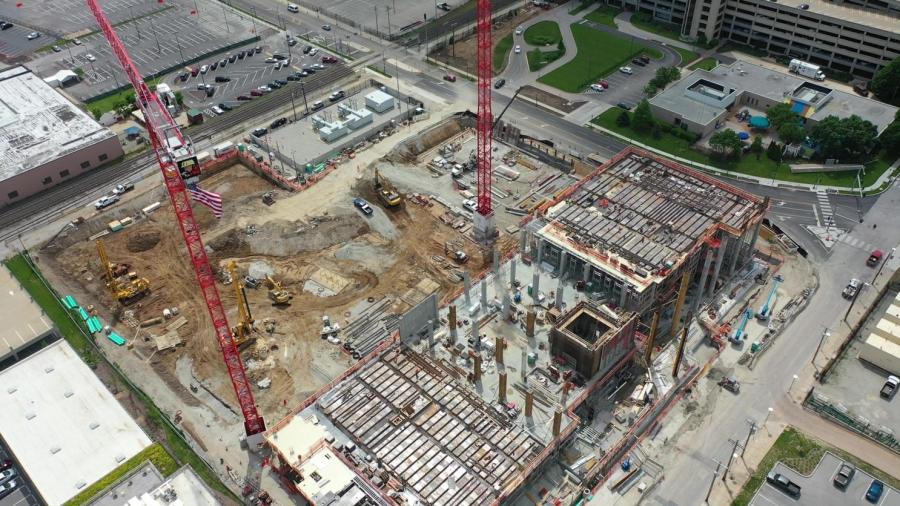 The building will be nestled in a hub of medical, research and biotech firms. The skyline there is dominated by BJC Healthcare, which includes two nationally recognized hospitals: Barnes-Jewish Hospital and St. Louis Children's Hospital. Both healthcare entities are affiliated with the Washington University School of Medicine.

The 609,000-sq.-ft. research facility will bring together more than 96 research teams made up of nearly 800 employees from various fields that will study the body's nervous system. In addition, shell space in the building can be built in the future for another 40 research teams.

The project also includes a 9-story parking garage adjacent to the research center, providing parking for 1,800 vehicles, and will support parking for the campus in this geography of the campus. In addition to the facility's research areas and labs, the new building will house event space and a large seminar room. The construction also will include an elevated walkway to one of the garages.

"This project will connect our campus to the Cortex Innovation Community and define the eastern edge of the medical campus," said Melissa Hopkins, the school's assistant vice chancellor and assistant dean of operations and facilities.

Located just five blocks from St. Louis' iconic Forest Park and about a mile from one of the city's major interstates, the research building will enjoy a desirable location. But for the construction team, the site had challenges.

First, construction started on a parking lot at the southeast corner of Duncan and Newstead Avenues. Unfortunately, because of the building traffic, Newstead had to be closed. In addition, two of the three-tower cranes were programmed never to swing too far east to ensure the safety of the neighbors. 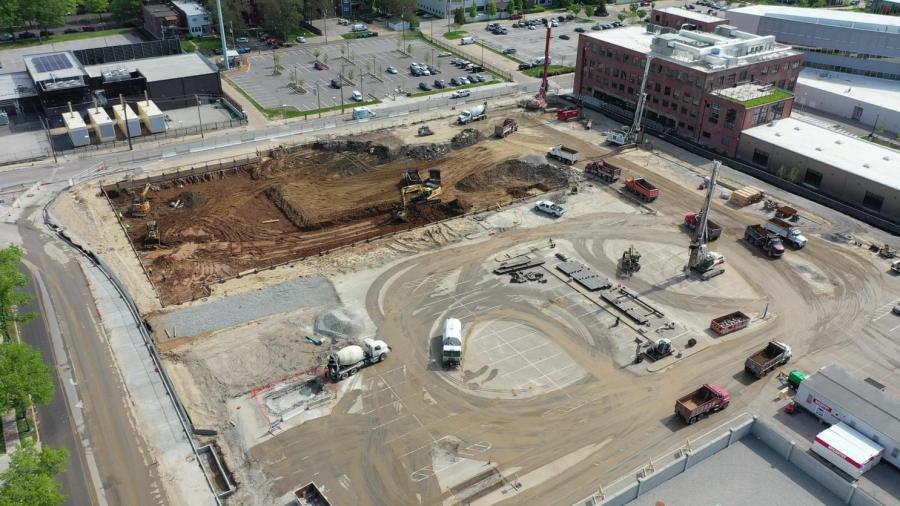 The construction team then began drilling the piles for the foundation.

"We encountered rock 15 feet down and needed to go at least 10 feet deeper," Hamel said. "We were not able to blast because of our proximity to the other buildings. In addition to that, we had a high water table at this location."

A down the hole hammer (DTH) was used on the drill rigs instead of conventional rock core bits. DTH mimicked the action a worker might take in using a sledgehammer to drive a spike into the rocky ground. However, a regular drill rig was not sufficient for the hard surface. So instead, workers drilled holes 10 ft. apart, inserted steel I-beams and sheathed the beams in concrete for the shoring system. Only then could workers begin pouring the concrete necessary to form a foundation 25 ft. deep.

The 11-story concrete-frame structure is designed differently from a traditional steel and concrete building.

"The designers opted for the concrete frame instead of steel because they wanted to minimize vibration in the building, which might affect the research projects done at the facility," said Hamel.

The concrete-frame structure will require more time than a steel frame building.

"Once we pour a deck, we have to wait for that deck to harden before we can go on to the next floor," said Hamel.

This waiting period would slow the workers who would usually be installing ductwork, plumbing fixtures, electrical conduit, fiberoptics, etc. To expedite the process, a subcontractor prefabricated many of these utility items offsite at a warehouse. The pipe racks were assembled in single racks as long as 20 ft. to be installed rapidly by the tradesmen after the concrete floors harden.

The first six floors of the concrete-frame building have been built. Two construction elevators have been attached to the outside of the building until the interior elevator becomes functional. The shape of the building has created unique conditions for the approximately 300 workers at the site each day.

The footprint of the building is 160 ft. wide by 400 ft. long. The third floor of the building encompasses an outdoor plaza. Floors four to 11 will rise skyward in a usual manner from this "step out" plaza.

The curtain-wall system for the building was prefabricated in Indianapolis by Ventana then shipped to the site. The large panels consist of glass, metal panels and louvers. The panels are installed with a tower crane which is a quicker process than a traditional stick-built wall.

Safety netting rings each floor, protecting workers from falling when working on the upper floors. In addition, tools are tethered to the employees so a hammer would not fall from above and damage the glass skin of the floors below.

"As with any new safety precaution, it takes the workers a while to get used to it," said Hamel.

The concrete is delivered to the workers through a boom mounted to a pedestal that runs from the top floor downward. This enables the concrete trucks on the ground to pump the concrete upward to the top floor, then down to the correct floor for easier placement by workers. 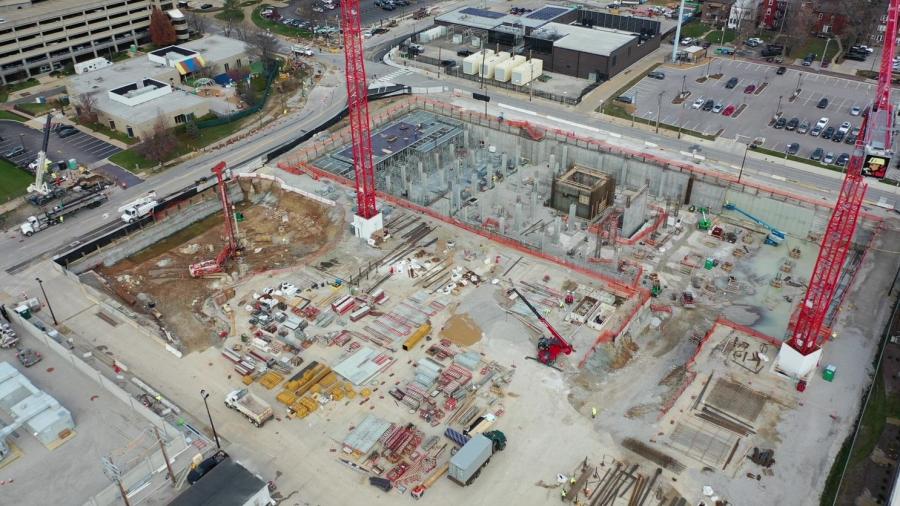 Currently, about 50 workers are installing the mechanical, electrical, fire protection and plumbing. Others are doing masonry work using concrete blocks to build out the interior walls. Workers also will connect temporary heaters enabling the labor force to continue working during the colder months.

Architectural firms Perkins&Will and CannonDesign designed the project with plans for the facility to achieve LEED silver status, and the project is currently trending toward LEED gold. One aspect of construction that will contribute to this certification is the proper disposal of waste and debris from the site. Also, some recycled material is present in the building materials, including slag and fly ash in the concrete.

Workers will install one of the signature elements of the building, a clear glass envelope for the atrium and the lobby. This unusual element will rise 40 to 60 ft.

Hamel and the workers have shown the team spirit typified by the city's beloved baseball team, the St. Louis Cardinals.

"This has been a great team effort," said Hamel. "It's rewarding to be working on a building where research will be done on Alzheimer's or other diseases." CEG