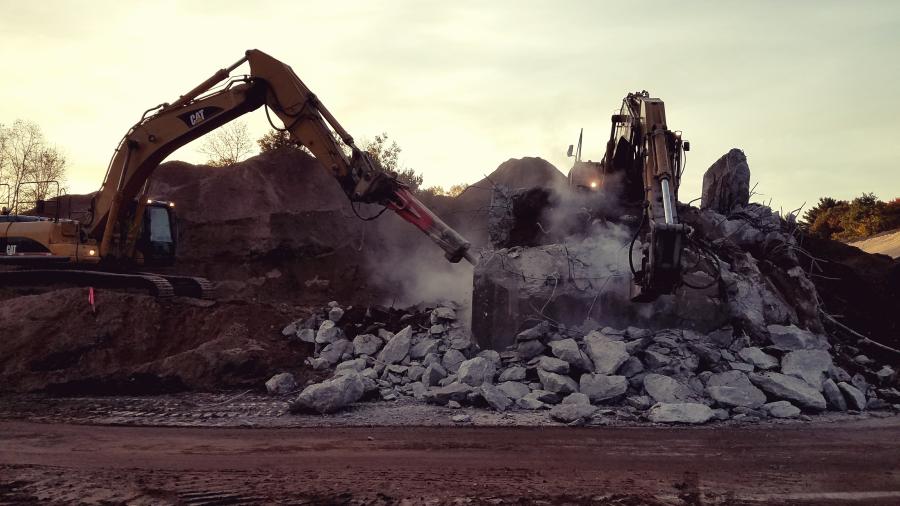 The Michigan Department of Transportation's (MDOT) $20.5 million U.S. 2 Escanaba River Bridge Replacement in Wells Township of Delta County, a project awarded to Zenith Tech Inc., is scheduled to be completed in October 2018.

The highlight of the project has been the successful lifting of the 200,000 lb. steel superstructure of the rail bridge, which will be reused at another location as the backbone of a new structure.

“It is considered functionally obsolete,” stated the project web page. “The new bridge will have improved vertical and horizontal alignment. Some of the existing 'dip' in the roadway will be eliminated. The new bridge will be 37 feet wider to accommodate wider shoulders and a pedestrian path. The railroad bridge will be moved to the south, away from the river, creating better sightlines.” 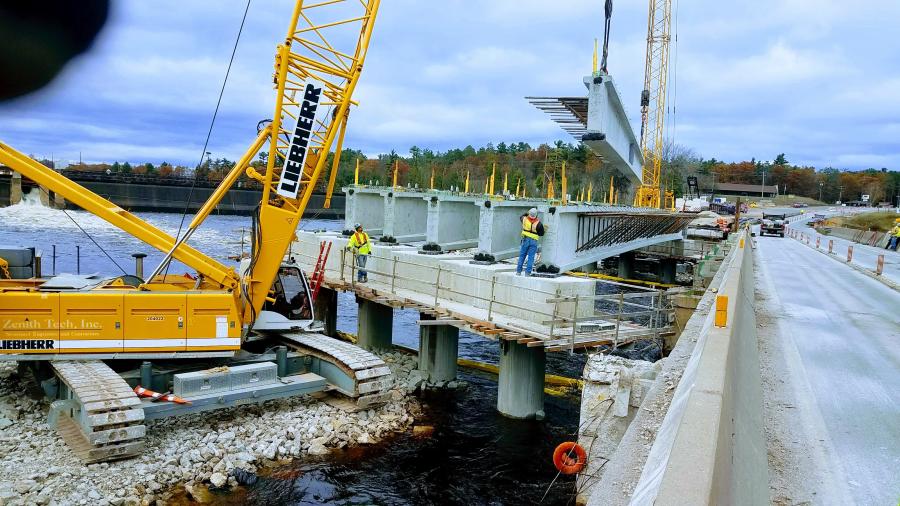 “The old U.S. 2 bridge over the Escanaba River was in poor condition, had poor drainage and had reached the end of its service life,” said Steve Cadeau, MDOT's project engineer. “The existing E&LS Railroad bridge was replaced to accommodate the new wider roadway cross section. The new roadway will feature five 12-foot lanes versus the existing four 11-foot lanes with a concrete divider.

“The new bridge is designed to meet current AASHTO LRFD bridge design specifications,” he added. “The new highway bridge will accommodate all vehicle traffic, have wider lanes for commercial truck traffic and [have] a center for the left turn lane to allow trucks to slow down and make a left turn onto Mead Road. Mead is at the east end of the bridge, and is also an entrance to Verso Paper Mill.”

With routine maintenance, the new road bridge is expected to have a life span of 75 years.

“One of the design challenges was to improve the geometrics of the roadway,” said Cadeau. “The new alignment removes some of the dip in the road and has a continuous curve across the bridge. The wider roadway required replacement of the E&LS railroad bridge. Engineering challenges included part-width construction, working in a major river and being downstream [from] the historical UPPCO power dam.

The new U.S. 2 bridge over the Escanaba River will feature a 14-ft. non-motorized path to accommodate pedestrians and bicyclists.

The southbound half of the U.S. 2 bridge was completed in late fall 2017.

“In order to minimize detouring traffic, one lane of traffic will be open in each direction for the majority of the project,” states the project web page. “An estimated seven total days of detours will be needed during the project. Parts of County Road 426 are closed to oversized loads. “

Eastbound and westbound traffic on U.S. 2, U.S. 41 and M 35 at the Escanaba River was switched onto the new bridge span on Dec. 9, 2017, to allow demolition and reconstruction of the previous eastbound highway bridge span that started this winter.

John Sowold, Zenith Tech's project manager, is pleased with the progress his crews have made on the multi-stage project.

“Stage one was for the construction of half of the new road bridge over the river,” said Sowold. “We demolished the bridge and completed the new half last summer and fall. The other part was building an entire new railroad structure — 50 feet away from the old bridge and then re-routed about 3,000 feet of track leading to the new bridge. The second stage was completed during a four-day, full-road closure. This work consisted of demolishing the rail bridge upper structure – the concrete deck and removal of two large steel beams — which we did last summer.

“We had subcontractors working 24/7 for four days —we did 1.5 weeks of works in a very short period,” he added. “The weather was good and everything went smoothly with almost no unforeseen circumstances. We started in May [2017] to build the new bridge and finished it in August.”

The key aspect of the demolition was removing the steel superstructure and using a large 160-ton crane erected to lift it.

“This was the largest single pick our company has ever done,” said Sowold. “We set it on the ground for a few days and then we lifted it again and placed it on a truck to take it away from the job site. We had to do an engineering analysis of the superstructure months before to determine that it could be picked up in one piece without falling, collapsing or breaking.”

E&LS determined that the superstructure could be re-used.

“We picked up a bridge that was nearly 30 feet wide,” said Sowold. “We were at angle where we had 1.5 feet between the railing on the bridge and our boom, and the boom could not tip anymore because we would have had been past the limits of the crane.”

The planning included the route for the lift, a process that was aided by MDOT and E&LS.

“It was a collaborative effort,” said Sowold. “Otherwise it would not have been successful.”

The crane had two operators who knew the machinery inside and out. A major aspect of the operation was setting up the pad, which required the removal of a section of a concrete barrier wall.

“When you're putting a crane pad together and you're up against the clock, you have to ensure that it's level, and we had survey equipment set up,” said Sowold. “We spent about two hours setting up the pad and in the meantime, we had people cutting the bearings so that the superstructure was no longer connected to the bridge. We had it in the air for about an hour. Everything was slow moving and it took a little longer than we anticipated, but it was worth it in the end.”

Construction of the new highway bridge began in June 2017 and was opened to traffic last December.

“We had some significant delays in regards to the piers in the river due to the level of the river, which is directly correlated to Lake Michigan,” said Sowold. “There are no dams or any infrastructure between our job site and the lake, which was at an extraordinarily high level at the time. The problem was that the access roads, which had to be installed, had to be at an elevation dictated by the Army Corps of Engineers.

“Unfortunately, that elevation was one foot below the top of the water level, and from the middle of June [2017] until early August, we weren't able to begin construction in the water until we got an exception from the Army Corps to raise the access road elevation by one foot to put us above the river,” he added.

Zenith had started the process to secure the exception in April, and sought the support of the DOT and Michigan Department of Environmental Quality. It was hoped that the water level would recede. The Army Corps asked Zenith to prepare a report to make the case for the exception, with the possibility of a reply in October.

“That was not going to help our project as we were given until the end of October to switch traffic onto the new configuration,” said Sowold. “The DOT got involved and stressed the need to get traffic onto the new bridge before the winter hits because the old bridge was very narrow and any time you get snow or weather that is dangerous, it can be very dangerous. The Army Corps relented and we started immediately.

“I had crews out for three weeks forming all of the falsework for the bridge in the cold and crummy weather,” he added. “Even after we pored the deck, we still had all of the approach work to complete. It was challenging.”

The inability to work during more functional summer weather shifted construction to the fall, which can be quite cold and inclement in Upper Peninsula Michigan.

“We didn't pour the bridge deck, which was scheduled for early October, until after Thanksgiving,” said Solwold. “We had a beautiful day for it. We didn't have a day over 45 F for six weeks, and we had a bunch of days that were highs in the teens and low single digits. We really got lucky when we pored the deck — it was 55 F. The next day it didn't get above freezing. It was awesome to get it. Otherwise, we would have had to take extraordinary means to keep it warm during the curing period.” 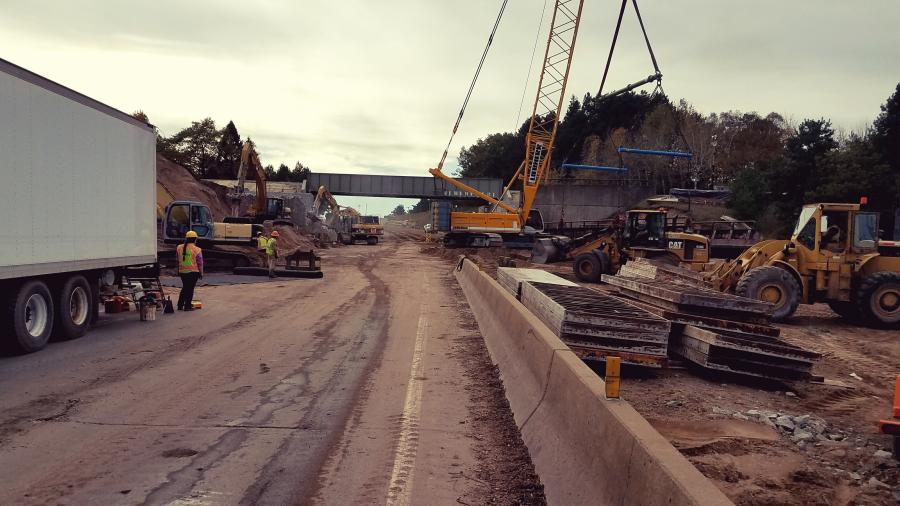 The focus of the remaining work is to rebuild the west side of the bridge. Sowold noted that Matt Gehrman, Zenith's on site superintendent, has been crucial to the success of the project.

“If it wasn't for his leadership and decision-making, I don't think we would be on schedule,” said Sowold. “We worked all through the winter, save for two weeks between Christmas and the new year. There's a good chance that we'll get ahead of schedule because of that work.”

Last year had crews doing some night work as lanes were closed and traffic was detoured.

“We did some work that was not originally on MDOT's schedule,” said Sowold. “We took advantage of the road being closed as it was safer and easier to coordinate several aspects. It was a little more challenging, but it was worth the effort.”

When needed, a mechanic from an associated Zenith's company is sent to the job site.

“It seemed that sometimes [the mechanic] was on site full-time,” said Sowold.

“We rented manlifts. Everything else we own. One subcontractor that did some drilling for our pier work brought in a special drill bit for their drill rig,” added Sowold.

The rented manlifts included a 660SJs from Sunbelt and Fabco and a Genie S-4 and S-65 from Fabco.