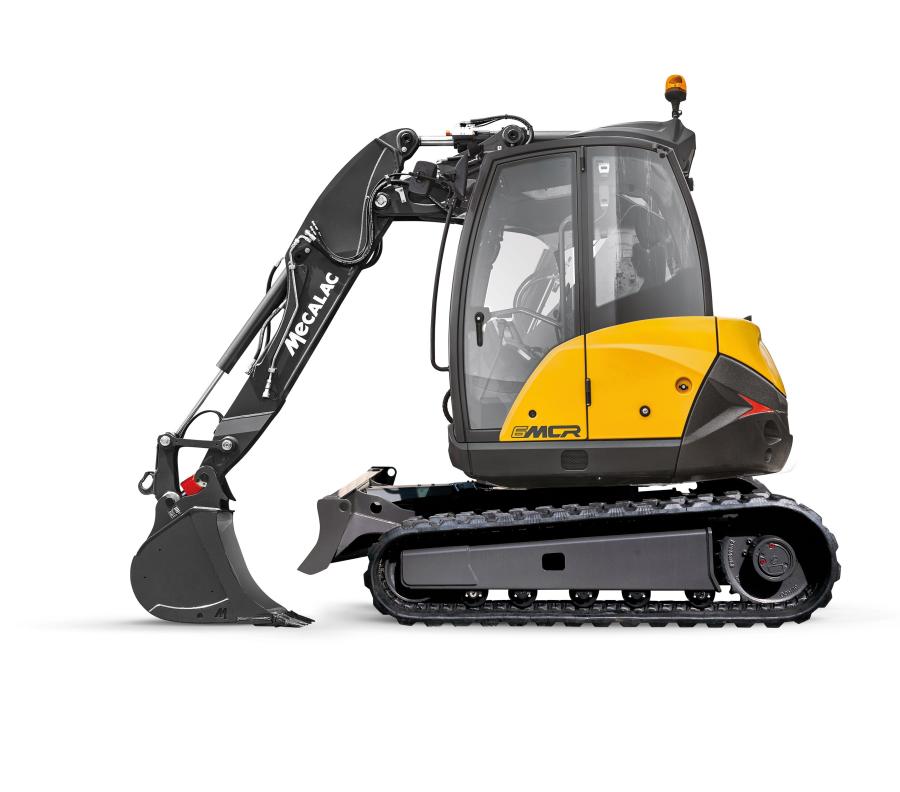 Mecalac's MCR series of crawler skid-excavators is comprised of three models: the 6MCR, 8MCR and 10MCR.

Mecalac, a leader in the design, manufacture and distribution of compact construction equipment for urban environments, introduced the newly updated MCR Series of crawler skid-excavators.

Comprised of three models, the 6MCR, 8MCR and 10MCR, Mecalac's line of compact skid excavators offers increased speed, productivity and compact operation over traditional mini-excavators, according to the manufacturer.

The machines provide the swiftness of a skid steer with the 360-degree rotation of an excavator for versatility and travel speeds two times faster than any small excavator. A compact footprint brings Mecalac's signature end-user-focused design to new applications and industries for increased safety, sustainability and efficiency.

"One of the main goals of every Mecalac design is reducing congestion on the job site by providing one machine that can take the place of several," said Peter Bigwood, general manager of Mecalac North America.

"The MCR Series is truly multifunctional, acting as a skid steer, excavator or rough terrain forklift, depending on the attachment.

"We designed the new MCR series to go faster than anything else its size because we know time is of the essence on every job site. But speed is only part of the equation when it comes to efficiency, so we added an unparalleled range of motion with the patented three-part Mecalac boom system, allowing operators to do more from a single position. Together these capabilities produce truly game-changing versatility." 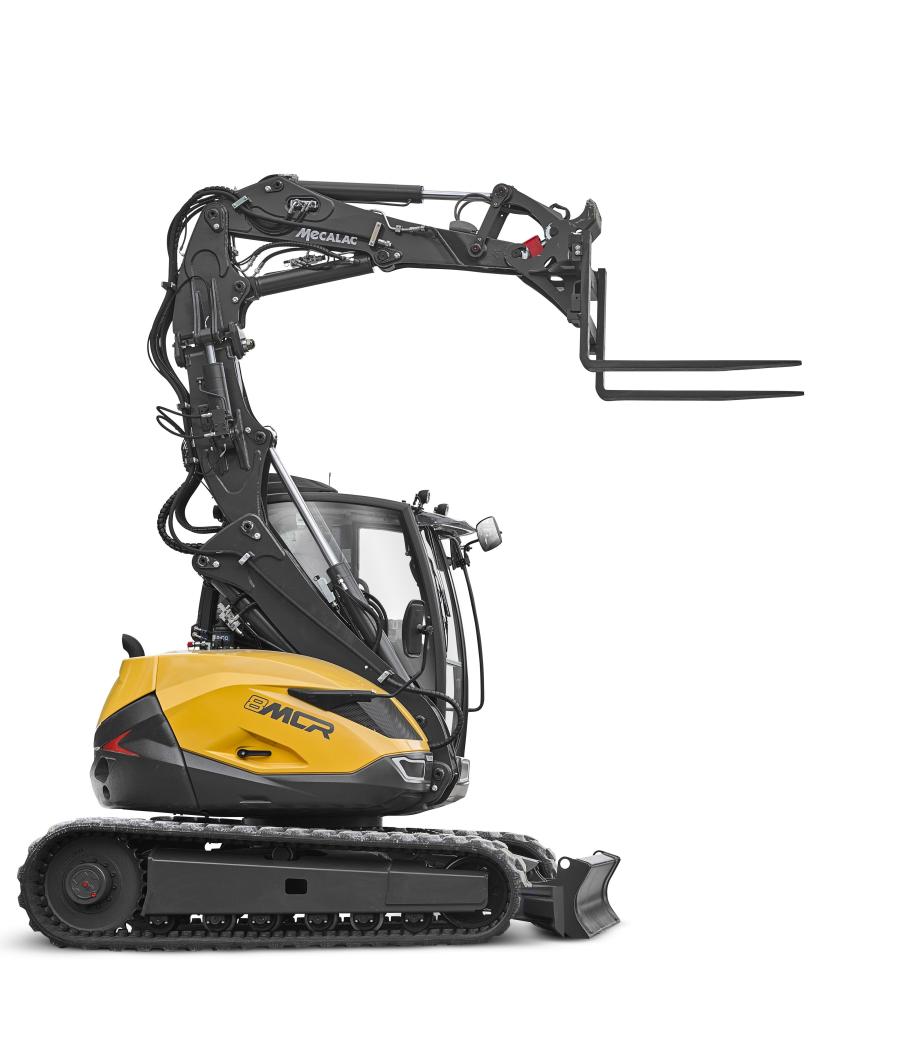 Comprised of three models, the MCR series provides the swiftness of a skid steer with the 360-degree rotation of an excavator for versatility and travel speeds two times faster than any small excavator.

The new MCR Series features a hydrostatic transmission and drive motors strong enough to take on any job. A dedicated pump drives the motor, allowing for twice the speed of any traditional mini excavator on the market.

Each of the three machines is capable of travel speeds up to 6.2 mph (10 kmh). This significantly reduces time spent traveling across job sites, resulting in faster cycle times and less unnecessary downtime.

On the job site, the MCRs' versatility increases productivity and reduces congestion. This is due in part to the company's quick coupler, CONNECT. The advanced system allows operators to quickly transition between attachments — such as pallet forks or digging buckets — without leaving the cab, decreasing downtime between tasks and increasing overall productivity. Additionally, once the pins are engaged, CONNECT guarantees zero risk of dropping a bucket, according to the manufacturer.

Using a range of attachments, contractors can easily do the job of several machines with a single unit, freeing up resources and space without sacrificing efficiency. With a skid bucket attachment, contractors can move up to .98 cu. yds (.75 cu m) of material at top speed or rest the bucket against the blade for applications such as grading and ground leveling. This stabilizes the bucket, distributing the forces to the frame of the machine and reducing stress on the boom, prolonging component life, according to the manufacturer.

MCR units combine Mecalac's three-part arm and a rotating ability to deliver enhanced performance as part of the company's signature 360-degree compactness. The extended range of movement increases flexibility and reach while minimizing unnecessary movement, allowing operators to do more from a single position or within confined spaces.

The three-part arm also can be tucked in, even with a full bucket, allowing for extra compactness and mobility without overbalancing the unit in the front — resulting in a true zero-turn radius. In addition, the boom system gives the MCR unprecedented lifting capacities – pound for pound, exceeding anything else on the market, according to the manufacturer. 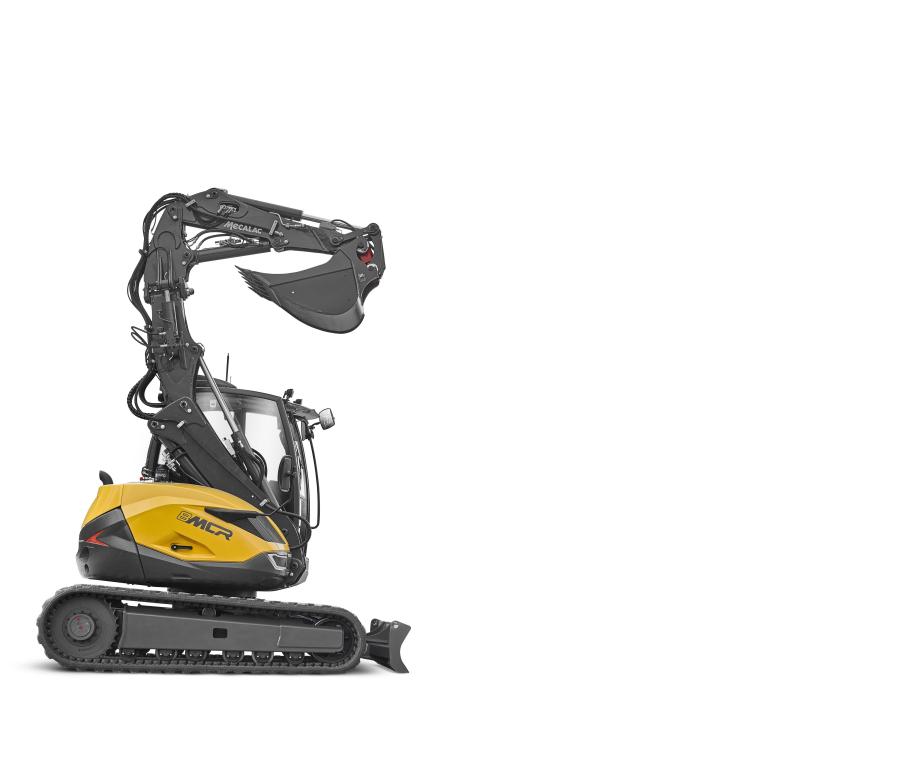 The compact footprint of the MCR series brings Mecalac's signature end-user-focused design to new applications and industries for increased safety, sustainability and efficiency.