Miami Stadium Could Rise From Ruins Under Restoration Plan 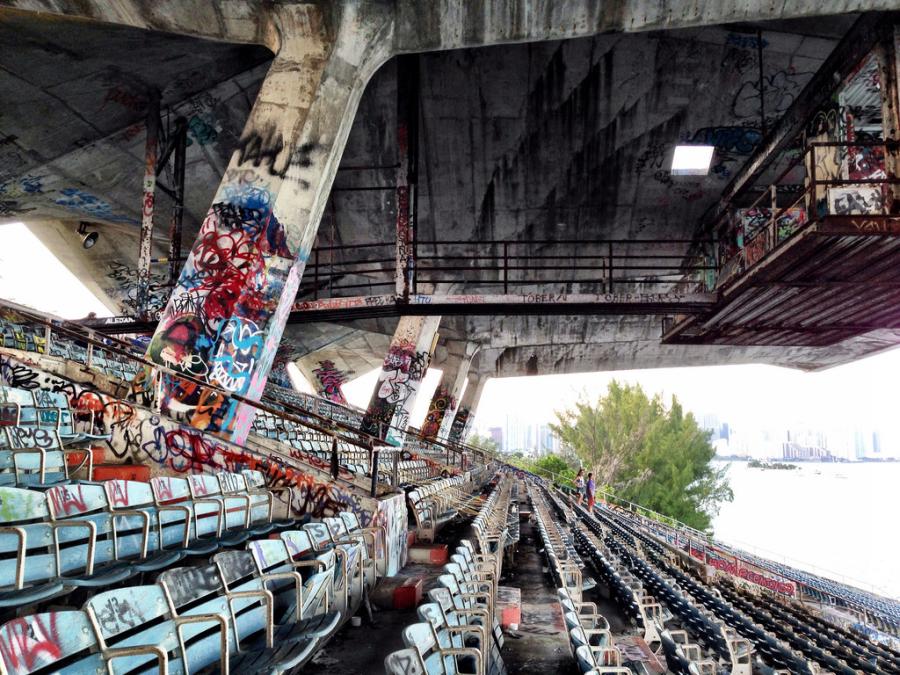 The stadium's rooms and concourses have been stripped bare, corroded by the elements. Rusted light fixtures from the vaulted cantilever roof have crashed to the ground and wedged themselves between aisles of janky seats. Layers upon layers of graffiti have spread like invasive vines across every wall. (Photo Credit: Flickr)

MIAMI (AP) — Miami Marine Stadium is a shell of its former self.

What was once home to world-class speedboat races, sold-out rock concerts and boxing matches now sits abandoned behind a fenced-off section of Virginia Key, a slice of land south of downtown Miami.

More than a quarter-century after the modernist concrete structure was condemned due to hurricane damage, trespassers have replaced patrons. Security guards are the new ushers. Heaping piles of illegally dumped trash and rubble now cover a ground once carpeted by ticket stubs.

The City of Miami has committed $42 million to restore the stadium and create a mixed-use park around it.

"We want this to be a signature space," the municipality's chief of urban design, David Snow, said at a recent town hall meeting organized to solicit public opinion.

Previous attempts by past administrations and outside groups all failed amid budget concerns and fruitless political negotiations. But now the city has the political wherewithal to get it done, and in fact has already hired a design team, Snow said, noting, "We've been waiting for this since 1992."

Built in 1963, Miami Marine Stadium was the brainchild of a young and ambitious Cuban architect named Hilario Candela.

For decades, it was home to hundreds of spectacles. In 1972, Sammy Davis Jr. warmly embraced President Richard Nixon at the stadium during a rally to support his re-election bid. Queen performed there in 1975, when tickets cost a mere $3 apiece. And other musicians, from Lynyrd Skynyrd to Whitney Houston and Jimmy Buffet, entertained crowds from the stadium's floating stage.

The festivities came to an abrupt end in 1992 when Hurricane Andrew swept through South Florida, leaving cracks in the foundation that prompted Miami officials to condemn the building.

Candela, now serving as the project's associate architect, described the city's original assessment as flawed and politically motivated. He said the damage was not from the hurricane but a direct result of lack of maintenance. "We knew that for a fact," he said.

For years, the stadium sat vacant without proper oversight and continued to decay. If not for the dogged efforts of the Friends of Miami Marine Stadium, an advocacy group that successfully fought to have it designated as a historical landmark in 2008, it would have been demolished.

"It felt tremendous" said Candela, who served as one of the group's organizers. Something he dreamed up nearly 50 years prior would "remain forever," he said.

Despite this feat, the stadium remains fenced off from the public.

Its rooms and concourses have been stripped bare, corroded by the elements. Rusted light fixtures from the vaulted cantilever roof have crashed to the ground and wedged themselves between aisles of janky seats. Layers upon layers of graffiti have spread like invasive vines across every wall.

Silvia Royer is overwhelmed by a mix of nostalgia and frustration when she thinks of the stadium that she grew up with. The 45-year-old Miami resident said the city failed its citizens by closing it.

"It made you love Miami," Royer said. She recalled attending concerts and sporting events during which attendees docked their boats near the stadium and drank beer from flotation devices, watching performances while wading in the water.

Four years after the stadium received historical landmark status, a 2012 study conducted by the World Monuments Fund deemed the building structurally sound. Public records show the assessment was backed by a 2017 study conducted by Wiss Janney Elstner, an Illinois firm responsible for overseeing the restoration and structural maintenance of the Sydney Opera House. The stadium was added to the National Register of Historic Places in April 2018.

"This entire project is meant to be a historic preservation," said Richard Heisenbottle, president of RJ Heisenbottle Architects, a local firm hired by the city to oversee the stadium's restoration.

He added that although the group intends to maintain the stadium's original structure, a significant emphasis will be placed on providing modern amenities so that the venue can once again provide a world-class sensory experience to audiences.

"We want people to come to the stadium even when they're not going to a concert," said Heisenbottle, who noted that the firm's goal is to allow visitors to have access on off days to enjoy the views of Miami's skyline and Biscayne Bay.

Officials hope the restoration will be completed by 2020.

On a recent afternoon, the only sounds heard inside came from boaters playing electronic dance music on small luxury vessels docked out in the basin. Iguanas sunbathed and roamed freely throughout the structure. The closest thing to a celebrity sighting was a mother attempting to take headshots of her daughter for a television show audition.

A security guard gently asked them to leave. They didn't have a permit to be on the property.