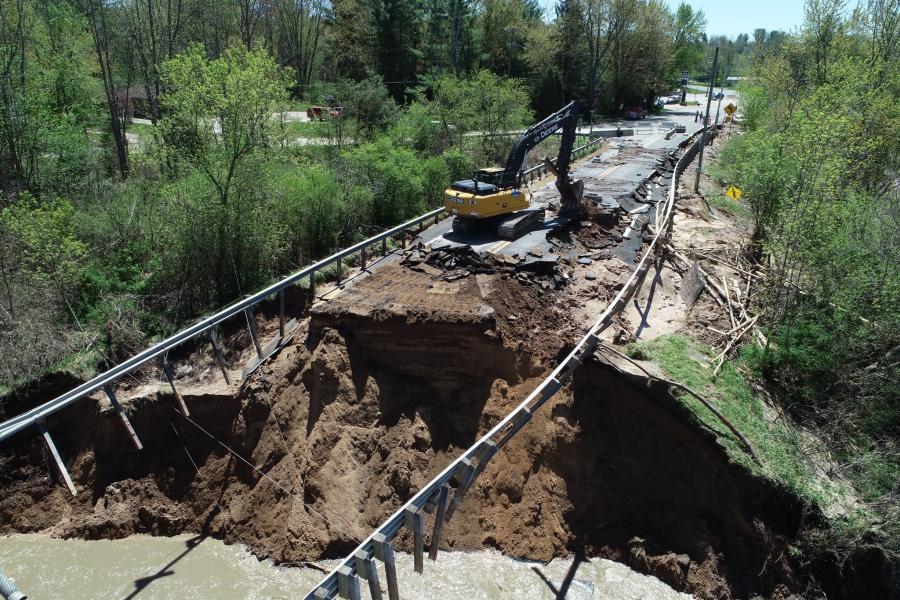 The floods damaged dozens of bridges, caused the failure of two privately owned dams and closed roads, as well as impacted infrastructure throughout Midland County. (Michigan Department of Transportation photo)

Only hours after parts of Michigan experienced what is described as a 500-year flood, Michigan Department of Transportation (MDOT) engineers were preparing emergency inspection and repair contracts. The floods damaged dozens of bridges, caused the failure of two privately owned dams and closed roads, as well as impacting infrastructure throughout Midland County.

"This is unlike anything we've seen in Midland County," said Gov. Gretchen Whitmer, declaring a state of emergency. 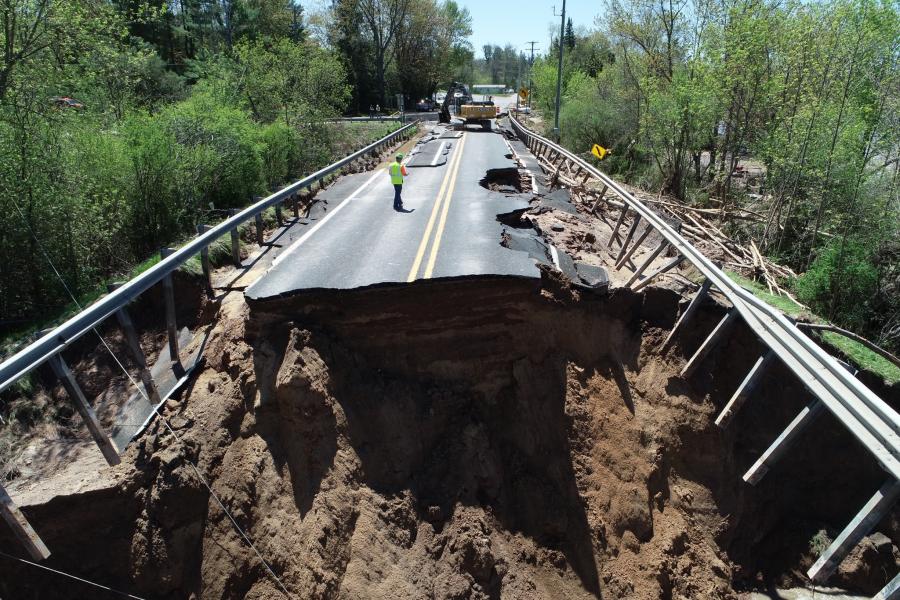 More than a quarter of the county's population, approximately 11,000 people, were evacuated as worried officials waited and watched the failing dams.

Midland City Manager Brad Kaye also issued a declaration of emergency. The Tittabawassee River crested at 35.05 ft. on May 20, about 5 ft. higher than the flood waters in the 1986 flood, which was classified as a 100-year flood and had been the highest on record.

"We have in our region a minimum of 23 bridges impacted," said Jocelyn Hall, spokeswoman of MDOT. "The biggest issue is making sure we can reopen some of those bridges. Some are a complete loss. All of the pavement was washed away or the entire bridge collapsed. Those were not large bridges. One was a causeway that leads to a marina and it has pretty significant damage to the infrastructure."

Other bridges appear to be undamaged, but inspectors will look beneath the water to check for scour — erosion that occurs at the footings and can cause destabilization. The approach to one bridge — newly reconstructed only a year ago at a cost of $23 million — was under water, but crews were able to get it opened in near record time.

"That's a huge success," Hall said. "We had so many bridges closed there really wasn't a way to detour people around. We're talking probably 50 to 60 miles. That's not a detour." 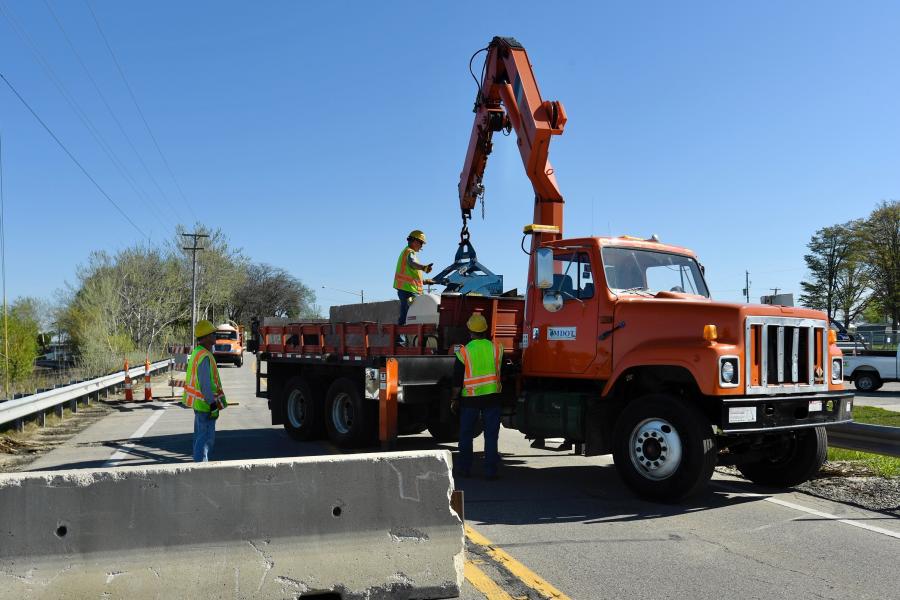 A section of U.S. 10 saw "huge chunks of roadway washed away," necessitating the closure of about one mile.

MDOT issued an emergency inspection contract to Great Lakes Engineers and was planning to meet to discuss emergency repair contracts.

"Obviously, our own crews have been out assessing damage," Hall said. "There are a number of different means we'll use. Some will be with our own forces, some we will contract out for inspection. We do have some pretty cool pieces of equipment. We call them Emily Boats. These are little motorized boats that have sonar devices that help to take video recordings beneath the surface of the water. They are ideal when you have flooding situations. We can't use them in place of underwater inspection, but if you have a flooding event and want to be sure the bridge isn't going to wash away, it's an option we can use."

As catastrophic as the damage is, Hall said the state is thankful there were no fatalities.

"That's pretty phenomenal," she said. "You have a dam fail and you don't have a lot of time to warn people. First responders were really efficient at getting the word out."

The failed dams, Sanford and Edenville, are owned by Boyce Hydro Power. Amidst reports that the dams had exceeded their life expectancy, Whitmer announced her intentions to further investigate the failures.

In a statement issued to the press, Boyce said the management and employees are "deeply distressed" by the dam failures. 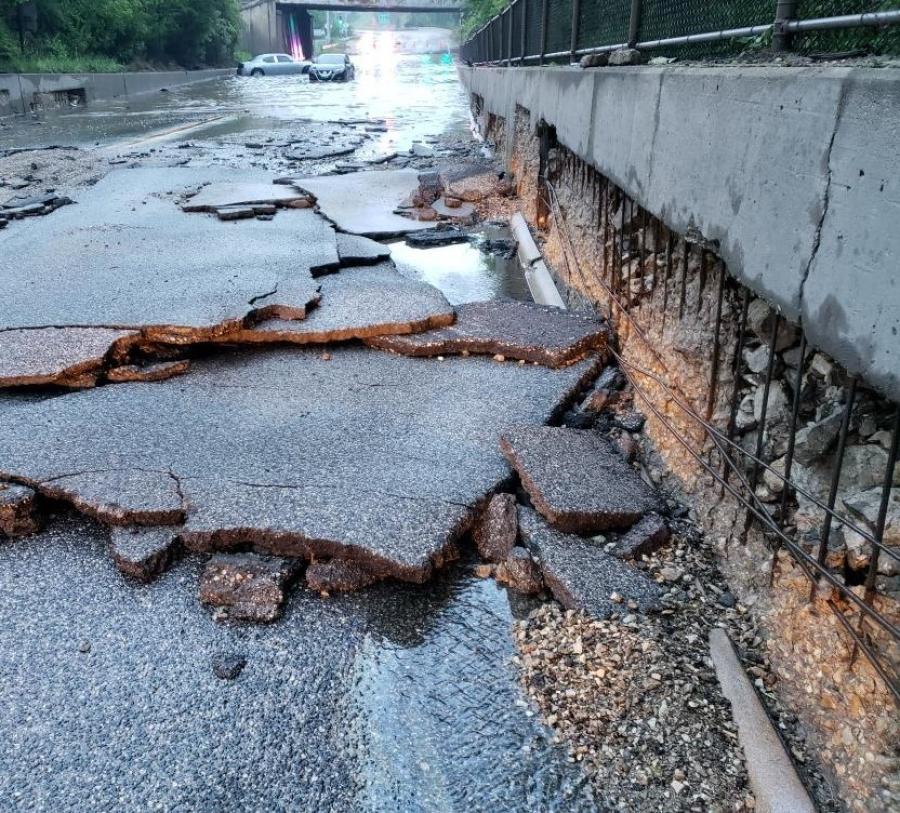 "In anticipation of what was predicted to be a major storm system, Boyce Hydro's operators began lowering the water levels in the impoundments behind the Secord, Smallwood, Edenville and Sanford dams on May 15," the statement said.

"Despite their round-the-clock efforts, the massive volume of rainfall in the drainage basins of the Tobacco and Tittabawassee rivers, over an extended period of time, resulted in increasing water levels in the Wixom reservoir, to two feet below the dam crest. This, combined with wave action due to high winds, eventually caused the water to penetrate the earthen dike at the east end, saturating it. This resulted in a washout of approximately 900 feet of the dam on the evening of May 19, sending large volumes of water downstream toward the Sanford dam. This volume was more than Sanford dam was capable of handling, and it was ultimately overtopped, again sending large volumes of water downstream."

The statement also indicated that Boyce has spent hundreds of thousands of dollars on engineering solutions and construction plans conforming to FERC requirements for passing 100 percent of the Probable Maximum Flood (PMF), calculated to occur once in every 1,000,000 years. 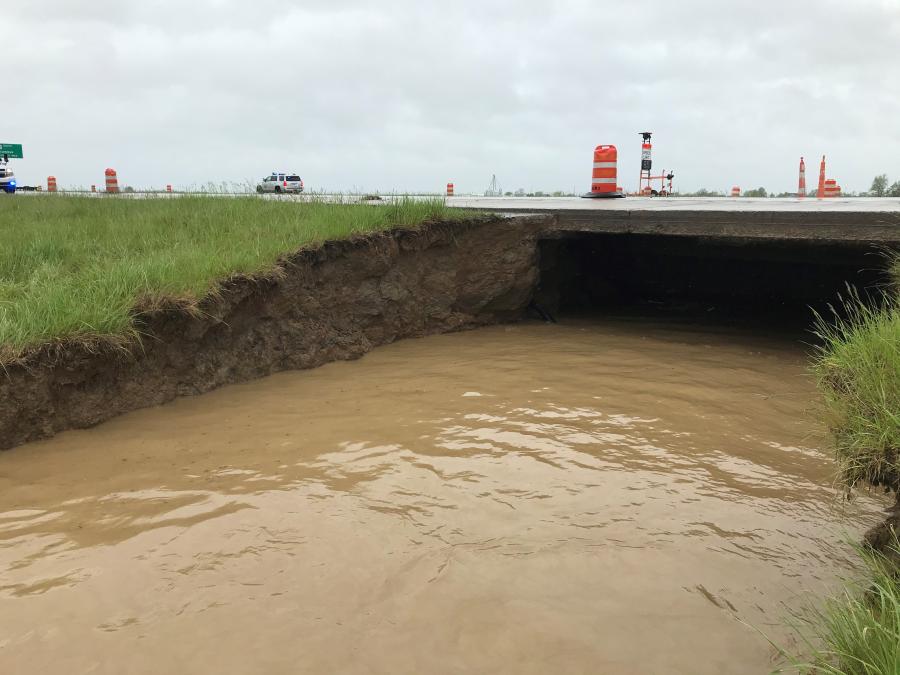 In Ohio, the worst damage occurred on eastbound U.S. 30 in the city of Sandusky when flood waters washed out a culvert, forcing the closure of the road.

"Everything underneath the pavement is gone," said Matt Bruning, spokesman of the Ohio Department of Transportation. "We're having to cut that section out and redo it."

The emergency contract for the repair went to Kokosing Construction Company.

I-71 also was closed for several hours due to flood waters and debris.

In Chicago, emergency repairs were necessary on Chicago Street (U.S. 52/Illinois 53) between Patterson Road and Doris Avenue in Joliet.

The work included patching, milling, resurfacing and pavement striping. Chicago Avenue was closed as a result of heavy rains and flooding damage. The eastbound I-80 exit ramp to southbound Chicago Street was also closed. CEG