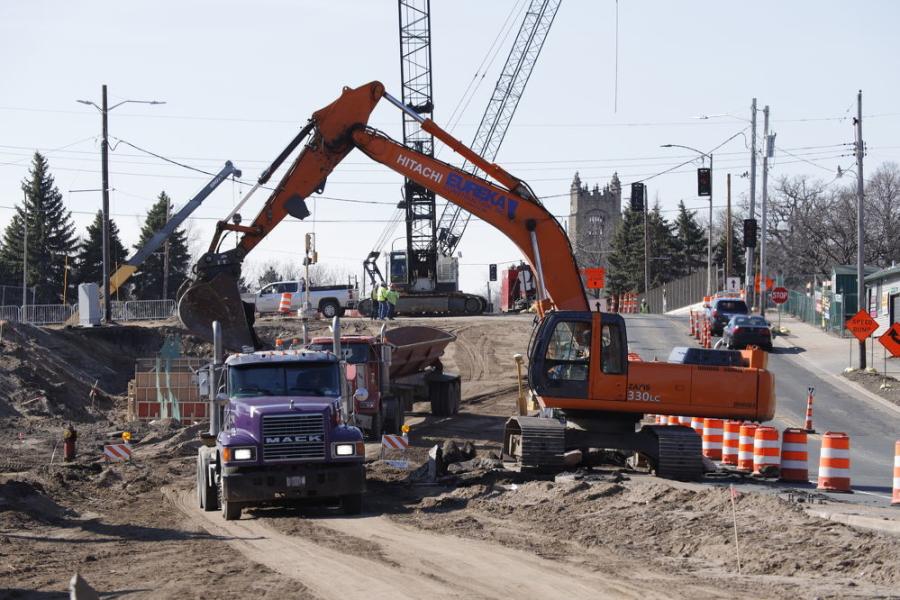 This Hitachi loads stripped pavement material into a side dump. As a byproduct of the bridge improvements, a quarter-mile of Dale Street is undergoing complete reconstruction including new sidewalk, street lighting and signal systems.

A unique blending of engineering, art and enthusiastic neighborhood input were key components in the replacement design of one of the original, urban bridges built over I-94 when President Eisenhower's massive interstate highway system began construction in the late 1950's. 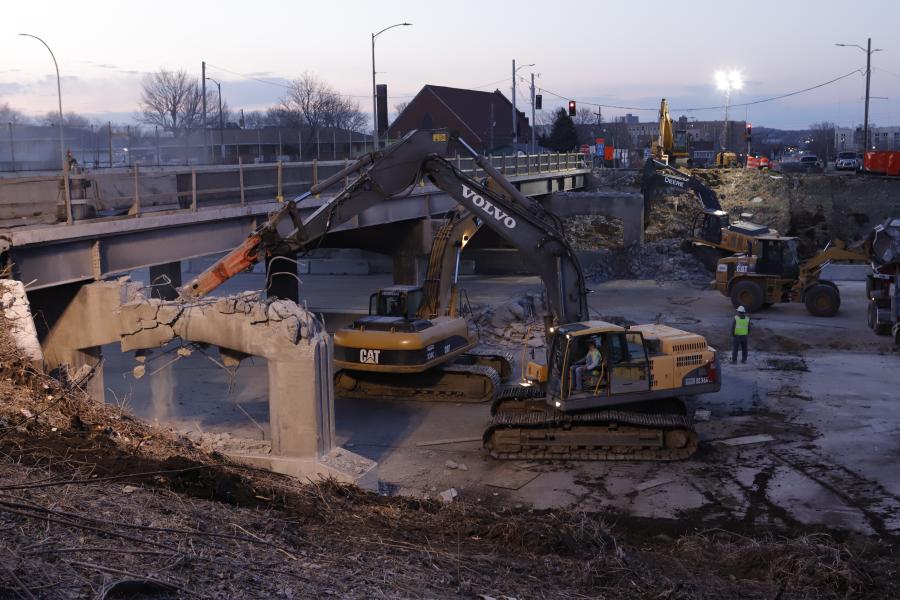 As highway crews below worked to carve out the new, 20-mi. freeway alignment through the inner cities of St. Paul and Minneapolis, bridge crews above them completed this bridge in 1960. Located on the outer fringe of downtown St. Paul, Minn., it brings Dale Street, a 4-lane city arterial, over the 6-lane freeway. The section of the interstate running through the Twin Cities was not completed until 1968.

Ramsey County is the lead agency on this reconstruction project, awarding the $14 million contract to Redstone Construction of Mora, Minn. This 42-year-old company specializes in heavy highway and bridge construction, demolition, piling and crane services. The county also brought in TKDA of St. Paul to help with construction management. TKDA is a nation-wide full-service engineering, architectural and planning firm.

Bridge crews are closing in on the final weeks of construction to open a new, wider and more efficient Dale Street Bridge. Keeping their fingers crossed that an early winter storm will not disrupt the current construction momentum, Redstone crews are shooting to fully open the new bridge to all lanes by late November.

Carrying approximately 20,000 vehicles daily, the new bridge is replacing an outdated one, notable for its narrow and crowded traffic lanes and no left turn lanes, which causes bottle neck traffic at this busy interchange.

During the original construction of I-94 60 years ago, a 2-mi. stretch of residential street in St. Paul's central core and home to hundreds of African American families was removed and replaced by the concrete, ramps and bridges. Once completed, the new freeway bisected this community and created a barrier between the neighborhoods. 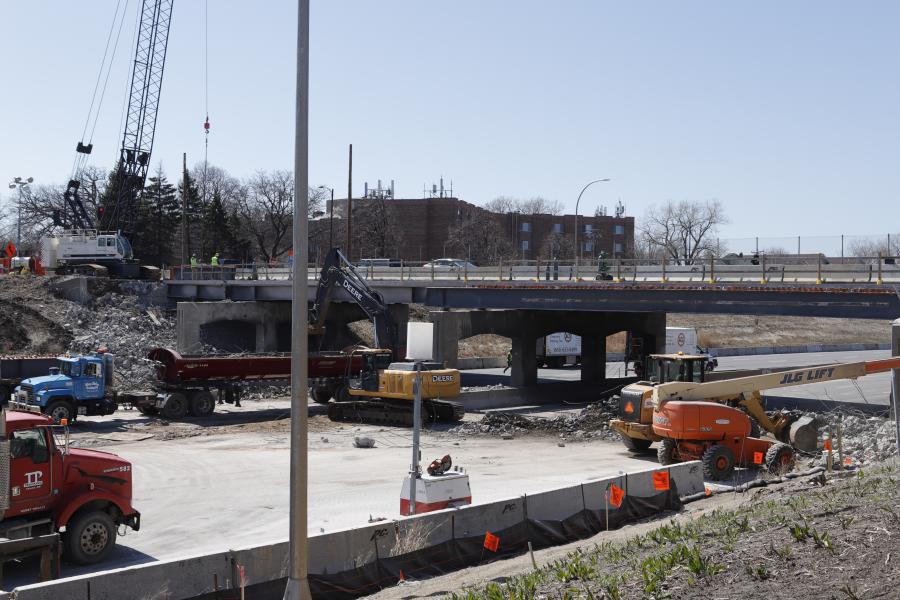 As a recognition to this neighborhood and to the community at large, art work representing the culture and homes of this well-loved niche in the city is a prominent part of the overall design of the new bridge. Art details include images of the homes stamped on the bases of the light poles; street maps of the original neighborhood etched into the concrete abutments; and a poem will be etched into each sidewalk from one end to the other.

The new and much wider bridge will alleviate congestion and make this crossing more compatible to both vehicles and pedestrians alike. The updates include four, 11-ft. traffic lanes; two, 12-ft. turn lanes; 16-ft. sidewalks; and 4-ft. shoulders on each side of the bridge.

Along with the typical utility relocations, 2,400 ft. of new storm sewer pipe ranging in diameter from 15 to 42 in. will be buried while the local water department is updating its fire hydrant connections.

There is a good amount of concrete going into the structure. The two abutments are sitting on 330-cu.-yd. footings while a 225-cu.-yd. footing anchors the middle pier. Seventeen 30-mh (high capacity) prestressed concrete beams support the bridge deck. This bridge in St. Paul is one of the first structures in Minnesota to use this type of beam, which is shorter and wider than the typical bridge beam.

Equipment mobilized to build the bridge and the road include Terex-American cranes, John Deere, Cat, Volvo, Hitachi excavators and dozers and JLG lifts.

Redstone Construction brought a good share of company-owned equipment to the site and relies on United Rentals to fill in the gaps.

The contractor has been blessed with nearly perfect weather this season. What contractors did not expect nation-wide and around the globe was a virus that would throw a wrench into daily construction operations. 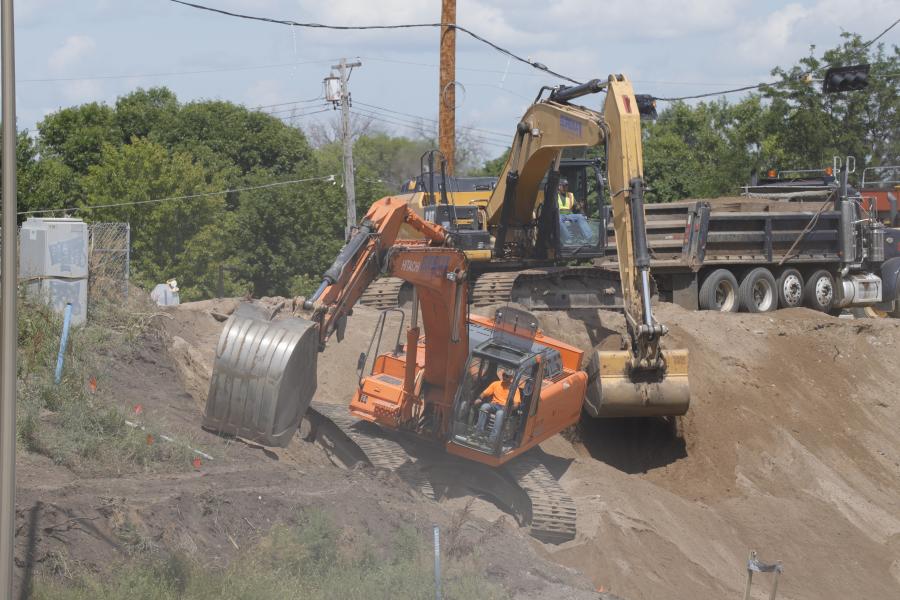 "COVID-19 has created some challenges in social distancing on the site. It has changed a lot of things in how we operate and how we facilitate meetings," said Matt Christenson, TKDA bridge group manager.

Yet, the contractor has been able to take advantage of lower traffic volumes because many more employees are working from home.

"The contractor has been able to get double lane closures from the Minnesota Department of Transportation to create additional working space. We were able to get a double lane closure to start right away on excavation for the second bridge demolition in late July. That would not have been allowed under typical traffic volumes," Christenson said.

Construction started in early April with driving sheeting "to stabilize Dale Street as it rises up and over the freeway because it needs to stay open to traffic," said Don Pederson, site superintendent of Redstone Construction.

Crews demolished a narrow section of the northbound bridge at night with the help of klieg lights. Redstone mobilized two American-Terex cranes, a John Deere excavator, Cat dozer and excavator, Volvo excavator and a JLG lift to bring the existing section of bridge down and begin construction on the new structure.

Space was very tight for equipment operators. With a crane stationed on the south end waiting to pick the steel beams off the bridge, heavy equipment shared a narrow strip of freeway pavement below the bridge deck.

Operators at the controls of a Volvo excavator and a Cat excavator equipped with hammers began chipping away at the bridge deck while operators on a Cat dozer and a John Deere excavator dumped the tangle of rebar and crushed concrete into waiting side dumps.

By dusk, all of the bridge deck was gone, most of the middle pier was gone and only two short sections of steel beams remained that spanned the freeway between the south abutment wall and the middle pier. 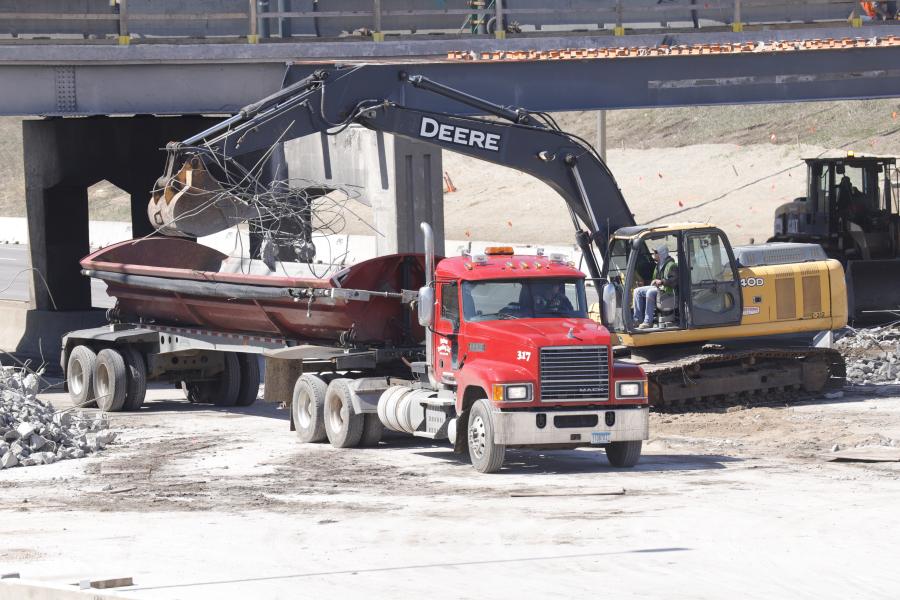 Crews worked non-stop through that weekend and had the freeway open in plenty of time for the Monday morning rush hour traffic as excavator operators began scooping out tons of sand to reach hard soil for the new abutment footings.

"The demolition went really well," Pederson said. "We protected the roadway with 12 inches of sand and basically knocked the bridge down onto the roadway and cleaned it up."

Near perfect geological conditions and no pilings worked in favor for the excavation work.

"We excavated down approximately 50 feet to hard soil to pour the footings. So geologically, I would say it's almost perfect. There is a lot of sand above that we excavated and were able to use as backfill on the new structure, so all that is working out really great," Pederson said.

Crews moved in after demolition and within days, removed the top soil and base material of the northbound lanes of Dale Street between I-94 and University Avenue while traffic continued in the southbound lanes.

Then, utility relocations and updates began, including the new stormwater main, new street lighting and signal systems and all new water main connections among the standard communication and fiber optic line relocations.

"Some days it was a juggling match because there were so many different contractors in here. Everything has to fall into place so everyone can do what needs to get done.

"There's no such thing as a perfect schedule. There are little snags here and there. Everybody seems to be getting done with what they need to do. We are all here to meet the same goal in the end," Pederson explained.

The art detailing going into the concrete on this bridge requires special attention.

"A lot of the statics on this bridge are pretty fine detail, which makes it more difficult for pouring concrete. Self-consolidating concrete is the route we're going," Pederson said.

To highlight the street maps on the walls, Redstone crews laser cut the maps on 1-in. sheets of plastic. The sheets will be placed on the gang forms to create the details required to distinctly show the original street layout, Pederson explained.

When crews wrap up construction in late November, the new bridge and street running north to University will be completed. Crews will return next spring to reconstruct a short section of pavement on the south end of the bridge and will finish with minor punch list items. CEG