The runway usually requires resurfacing every 15 years or so and in 2016 the surface had provided MacDill Air Force Base with 16 years of service. 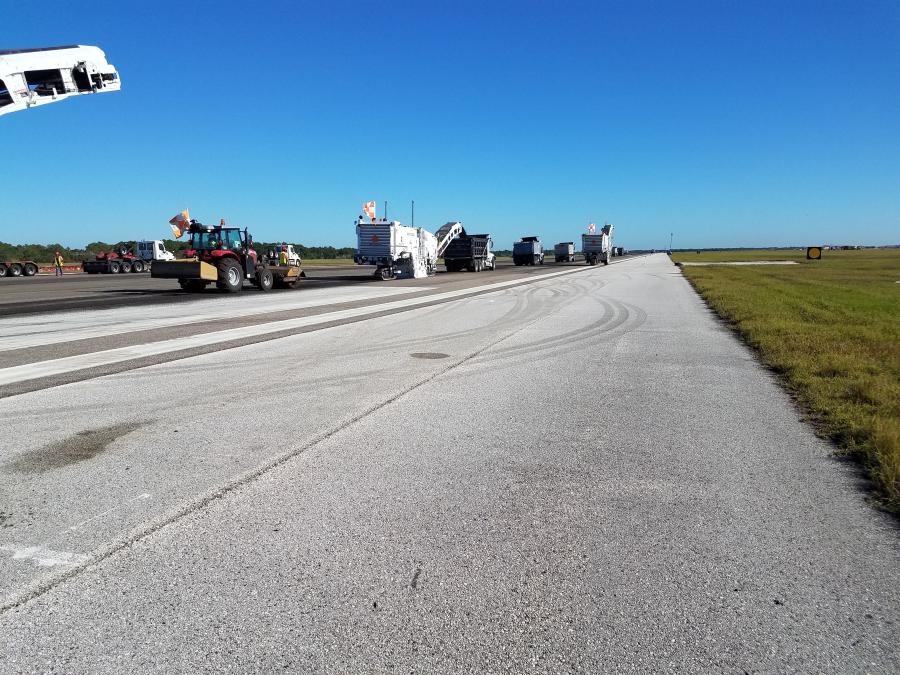 MacDill Air Force Base, located approximately 4 mi. south-southwest of downtown Tampa, Fla., is the base for the U.S. Air Force's Air Mobility Command, which provides airlift, special missions, aerial refueling and aeromedical evacuation for the armed forces. MacDill is home to 16 KC-135 Stratotankers and three C-37 Gulfstreams. The aircraft use MacDill's flight line every day.

At any point, there will be a steady flow of aircraft departing and landing on the base's sole runway, Runway 4-22. The runway is 9,421-ft. long by 151-ft. wide, or approximately 150,000 sq. yds. The runway usually requires resurfacing every 15 years or so and in 2016 the surface had provided MacDill Air Force Base with 16 years of service. Wear and cracks had developed. Even their best pilots were finding it a bit rough for executing smooth landings.

The $8.1 million runway resurfacing project was awarded to Danner Construction Company Inc., Tampa, Fla., as the general contractor on the project. Ajax Paving Industries, North Venice, Fla., completed the paving and Turtle Southeast Inc., Largo, Fla., handled all of the asphalt milling of the old surface.

The overall project is expected to close the runway for about two months. The aircraft traffic was redirected to nearby Tampa International Airport and to Joint Base Charleston to continue the Base's operations.

The U.S. Air Force runway rehab project is under the careful scrutiny of Robert Moore, deputy director of the 6th Civil Engineer Squadron (CE) and his staff, as well as Lt. Col. Chesley Dycus commander of the 6th Operations Support Squadron.

“The challenge we faced was time,” said T. Allen Gill, general manager of Turtle Southeast, “Our window for milling the entire runway was set at 96 hours.”

To complete the project on time, Turtle assigned much of its equipment and staff to completing the project. The company has 50 employees and a fleet that includes 13 Roadtec milling machines, 13 service trucks, nine transports, five water trucks and a variety of ancillary vehicles.

“We started milling at 0 hundred hours on Thursday. which gave us until midnight Sunday to finish,” Gill said. “Our crews pulled the nose up on this one and finished it ahead of the projected schedule by 24 hours.”

The total milling depth of the project was 4.25 in. and required a total of 400 machine hours to complete. Turtle milled the first layer of asphalt at 2.25 in. and then milled the second layer to final grade using a machine control GPS system. The company had 30 employees working on the project and dedicated eight of its high-productivity Roadtec RX-700e cold planers to ensure the project was done accurately and within the tight timeframe.

Additionally, Turtle Southeast needed to ensure that the milled grade was tight enough so that Ajax could achieve finished paving tolerances of ¼-in. or less to meet FAA standards.

“Roadtec mills are incredibly heavy-duty and reliable,” said Gill. “At some points of this project we were running the machines 20 hours a day without a single minute of downtime due to our equipment. And I might add, we have some older machines in that group, but they are as reliable as the new ones—which is another reason why we are sold on Roadtec.”

The RX-700e features a 755 hp (563 kW) Caterpillar engine and the machines have the exclusive Roadtec Guardian Telematics System, which monitors the machine in real time through a wireless signal, and can address any issues that may arise while the machine works. The telematics system also allows Roadtec service personnel to remotely view the machine in real time. The engine, hydraulic system, electrical system and grade control can all be monitored in detail and adjustments can be made remotely.

Gill said he likes the layer of security the Guardian System provides but for the MacDill runway project, the machines were reliable, so there was no need to tap into Guardian.

“If there had been a need, diagnosing a machine equipped with the Guardian system is a much quicker and more efficient process,” said Tim Hammer, maintenance supervisor of The Turtle Companies. “The system's Live Schematic lets me see all electrical circuits in a simple and efficient layout with real time status of all switches, valves and settings. If I need to, I can make changes to the system parameters from my laptop without touching the machine.”

The short milling timeframe and aggressive pace Turtle Southeast adopted meant minimal sleep and a lot of coffee. Gill remarked that he added up the coffee receipts from the nearby Dunkin' Donuts and it was $400 for the crew.

“We worked hard on this project and put in some long hours,” said Gill.“ At one point, for a split second, I thought I was dreaming when I looked down the two-mile runway and saw eight Roadtec RX-700e cold planers working simultaneously. But I quickly realized that the beautiful sight was real.”

Gill credits Ajax for its support throughout the project and doing a great job of staging their trucks, so the milling could continue uninterrupted: “When we started the day on Saturday morning there were a total of 130 trucks lined up and waiting to be filled.”

As Turtle Southeast finishes up a few add-on tasks for the MacDill Air Force Base Runway 4-22 project, Gill said, “The ease of use of our Roadtec milling machines helped us dramatically decrease the amount of time it took to complete this project. To be honest, I believe the machines are made beefier than other milling machines on the market, I'm happy that they are, because I believe that's what makes them reliable and able to last as long as they do.”