Designers are optimistic peak hour congestion will ease up on this section of interstate for years to come with the addition of a High Occupancy Vehicle (HOV) lane in each direction. 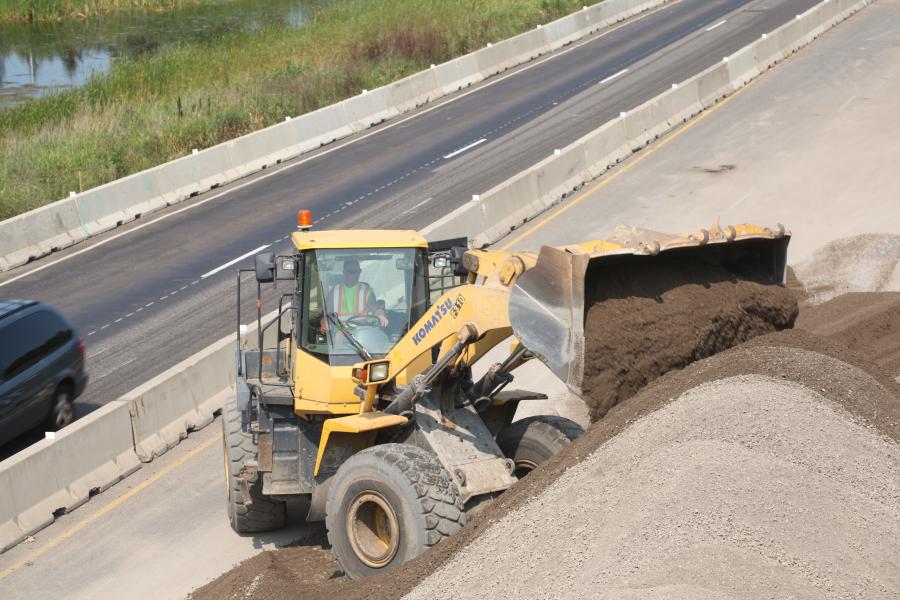 With miles of wider pavement stretching out before them, the 100,000-plus drivers wheeling through I35E north of St. Paul, Minn., should soon reap the benefits of a recently completed yet painful, two-year road improvement project.

With miles of wider pavement stretching out before them, the 100,000-plus drivers wheeling through I35E north of St. Paul, Minn., should soon reap the benefits of a recently completed yet painful, two-year road improvement project.

Though construction may have seemed to have no end for daily motorists, designers are optimistic peak hour congestion will ease up on this section of interstate for years to come with the addition of a High Occupancy Vehicle (HOV) lane in each direction.

Dubbed the MnPASS lane by the Minnesota Department of Transportation, (MnDOT), the $53 million project extended the first 5 mi. (8 km) of this lane running north out of downtown St. Paul for another 9 mi. (14.5 km).

Now, motorists taking advantage of the MnPASS lane in and out of St. Paul have this slice of concrete for nearly 15 mi. (24 km) from the downtown district to County Road J, where the metro area changes to a more rural nature.

Except for punch list work and building the remaining sections of new noise barriers, road crews completed the construction of the new MnPASS lanes.

Based on the demand of the first MnPASS lanes in and out of downtown St. Paul, Brad Larsen, MnPASS Policy & Planning director, expects the 9 mi. (14.5 km) extension, which is a combination of new construction and restriping existing lanes, will have the same success.

“We anticipate the lane usage will continue to grow. Whenever you create a longer MnPASS option for commuters, you get better reliability over longer distances,” Larsen said.

Supporting Larsen's optimistic outlook is the installation of new technology to manage and collect tolls for lane usage.

“We upgraded a lot of the technology that operates the system,” Larsen said. “We put in new toll readers and new electrical equipment in the field to handle the toll lanes.

“We also switched up to a new operating system that involves a new customer interface and we started using our own traffic management software called IRIS for the trip building which includes the pricing algorithm to measure traffic volumes and the pricing for the lanes.”

“The construction really went pretty well. They did a great job completing the job in one season,” Larsen remarked. “There were a lot of people wondering if it was possible but our construction staff and contractors made it possible. It was great to see.”

Hoffman Construction is a family owned company with its beginnings dating back to 1915 when the patriarch of the company, Peter Hoffman, began hauling coal and freight with a team of horses and mules. It has now grown to a $150 million construction company specializing in highway and site development construction.

The scope of the project ran from the interchange of I35E and TH36 at the south end to a point just beyond the freeway's connection to County Rd J near the small community of Lino Lakes.

The recently completed work picked up at the tail end of the 5 mi. (8 km) I35E rebuild from downtown St. Paul to TH36. Including building the first MnPASS lanes on I35E from downtown, this work added much needed capacity to the highway.

The heavy construction for the MnPASS extension and bridge work began at the interchange of I35E and County Road E, 3 mi. (4.8 km) north of the southern limits of the project under the Shafer contract. Here, Shafer road crews went to work on a 1.5 mi. (2.4 km) segment of the freeway to add a third lane for MnPASS traffic between County Road E to just south of its connection to County Road 96 that serves the 24,500 residents of White Bear Lake.

Sub-contracting for Shafer, bridge crews with Ames Construction based in Burnsville, Minn., tore down the pair of existing and out dated bridges crossing over a local arterial and raised two new structures to accommodate the MnPASS lane and bring them up to current design standards.

Ames crews also closed down the County Road 96 bridge to make major, structural improvements to improve its load capacity. This work included replacing the pier caps and beams and pouring a new and wider deck.

Hoffman's crews picked up the work at this point. Here, they prepared the road base and poured concrete for the northbound MnPASS lane running approximately 3.5 mi (5.6 km) to a point .5 mi (.8 km) north of County Road J. They also built two shorter lane segments just south of County Road 96 to meet the work done by Shafer crews.

Because of the additional road surface added through this section of the freeway, Hoffman crews buried 21,000 ft. (6,400 m) of storm sewer pipe to handle the added run-off.

South of County Road E, Hoffman Construction crews restriped existing lanes in each direction and converted them to HOV lanes to close the gaps in the remaining sections of the MnPASS extension.

The newly poured concrete lanes added approximately 9.6 acres of impervious surface to the existing highway. Including the thousands of feet of storm sewer pipe, a .7 acre pond was built along with swales and smaller ponds to treat and store the run-off.

To bring this project to an end, road and bridge crews worked six days a week, sunrise to sunset in the heat, sun and rain of two summers and the snow and cold of one winter to keep the work on track and on schedule. They maneuvered heavy equipment in the narrow confines of jersey barriers to keep them safe from moving traffic.

Motorists endured two years of restricted speed limits and traffic backups. Residents and shoppers at the interchanges of County Road E and County Road 96 were met with ramp closures and detours.

Dozens of pieces of heavy equipment rolled in to build the bridges and new lanes. Motorists driving through the work zone saw Cat backhoes, loaders, Komatsu backhoes and Bobcats working the entire length of the project. A pair of Manitowoc cranes towered over the bridge construction site.

To the advantage of the traveling public, MnDOT designed the project to keep lane closures to the minimum and scheduled most of them during off-peak hours to keep traffic impacts low, said Eric Embacher, MnDOT project manager.

Given the fact that there were two separate but overlapping road contracts, Embacher applauds both contractors for “doing a good job working together to make sure their work got done. It was a lot of work to do in a fairly short time frame.”

When work began in July, 2015, Shafer crews would soon discover an issue with staging under their contract that boiled down to a matter of inches and would have extended the completion date out another six months if not resolved.

“There was a staging flaw right out of the chute,” said Chris Tredinnick, project manager of Shafer. “We identified the problem sometime in September. We had to scramble all fall of 2015 to get this job to a certain point so work on the bridges could continue over the winter.”

A grade difference of up to 18 in. (45.7 cm) in the pavement through the medium area at both ends of the bridges was at the root of the problem.

The construction phasing called for the inside sections of the new pair of bridges through the common median area between them to be completed near the end of the 2015 construction season. This would allow crews to divert traffic through this area while they built the northbound bridge.

However, the grade difference would not allow a permanent concrete pour.

“At that point, there was a huge delay to the job because we were not able to get as much work done in the first year as we originally planned and to continue work on the northbound bridge,” Tredinnick said.

To allow work to move forward on the northbound bridge, Shafer staff and MnDOT engineers decided to delay a permanent concrete pour and place asphalt on a temporary basis instead and over pave the grade change to maintain an even road surface.

“By doing that, we kept the cars in the original, planned alignment which allowed work to proceed on the northbound bridge as originally staged,” Tredinnick said. “If we would have missed that window, and not been able to get the vehicles in that alignment and keep work going on the northbound bridge, we never would have completed the project to meet the original schedule.”

This strategy, however, caused a major revision to the original contract schedule. While work continued through the winter months of 2016 on the northbound bridge, MnDOT and Shafer nailed down a revised schedule by moving back the permanent concrete pour to later that year.

Though the consequences were longer days and more equipment mobilized, it was a victory for Shafer Contracting and MnDOT.

“All through 2016 we increased our daily hours, brought in more equipment and brought in our concrete paving crews more than originally planned. “It was a huge win for MnDOT and Shafer to recover the lost time,” said Tredinnick.

By the spring of 2016, bridge crews completed the northbound bridge and switched traffic over to the new structure and routed southbound traffic through the median area to build the southbound bridge.

When bridge crews finished the southbound bridge late last summer, another traffic switch was made to route traffic off the median and through the outside lanes of both bridges to complete the median area.

Hoffman crews working north of the bridge site faced the same deadline and intense work schedule while working around a wet summer that saw heavy rainfalls.

“Rain was a big factor. Almost every week, we had large rainfalls. There were numerous 3 to 4 inches,” said Todd Hoehn, Hoffman project manager.

And in a project measured in miles and thousands of feet, success depended on fractions of the inch.

“The tolerances between paving lifts ranged from .10 inches to 1.0 inches. They were really tight,” Hoehn explained. “The paving contractors worked well with each other to make sure the final product was a success.”

Before any paving work could be done, Hoffman crews had to bury 21,000 ft. (6,400 m) of storm sewer to handle the additional run-off. With multiple sewer crews working six days a week, ten to twelve hours daily, up and down the highway, they installed all the pipe and 266 structures in eight weeks.

A small contingent of workers and equipment will soon return to the site to complete the noise barriers, landscaping and minor punch list work while MnDOT staff continue to monitor traffic flow and demand on the new MnPASS lanes.

According to the MnDOT website, there may be some occasional lane closures required to complete the remaining noise barrier work.—CEG