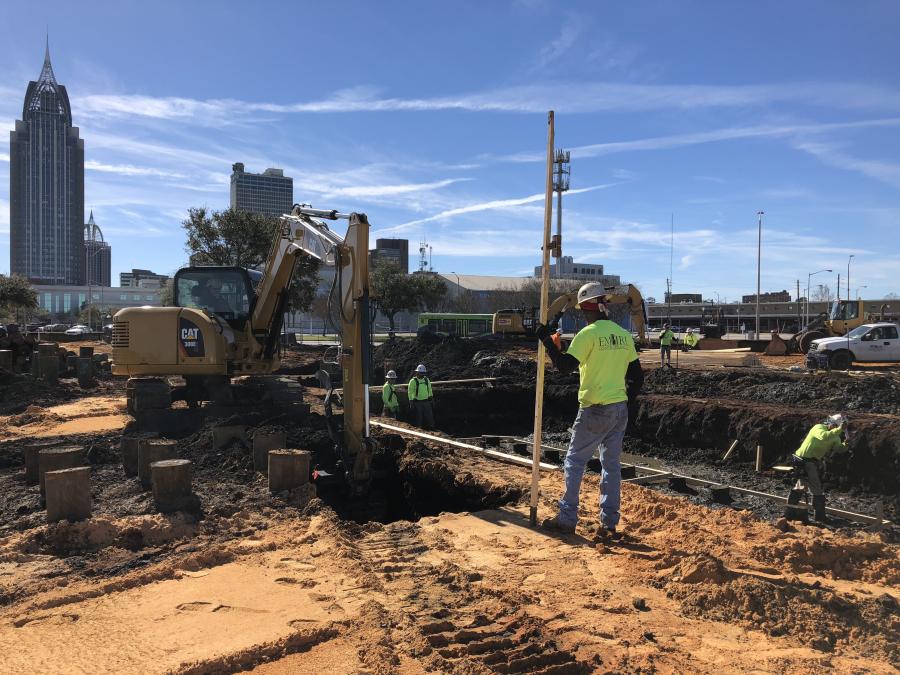 When it opens in 2019, Meridian at the Port will become Mobile, Ala.’s first large-scale downtown residential development in over half a century. (Photo Credit: Golden Construction)

When it opens in 2019, Meridian at the Port will become Mobile, Ala.'s first large-scale downtown residential development in over half a century. The $51 million, 267-unit development will feature upscale studio, one-bedroom and two-bedroom apartments with high ceilings, large windows, balconies and an elevated pool and courtyard facing the downtown skyline.

“It's a testament to what vision and confidence can do,” said Mike Rogers, founder and president of Rogers & Willard Inc., which serves as a consultant on the project. “The Water Street location is the first recent step in really taking Mobile back to its roots on the river. This spectacular project on the waterfront will allow residents to see the commerce that happens every day. Mobile is here because of the Mobile River and Mobile Bay. It's rewarding to be a part of the project that once again connects the people to these magnificent assets.”

The firm convinced the developer to consider Mobile for a Class A Urban multi-family project.

“Once he agreed that the timing was right, we were instrumental in helping lay the groundwork. This included facilitating meetings with local leaders and working through issues related to land acquisition and site development,” said Rogers.

Providing local knowledge to the developer and contractor has been essential during the process.

“This can be related to best local construction practices related to our coastal landscape, or helping with issues that may arise unrelated to onsite construction,” he said. “Since Rogers & Willard has been in Mobile over 25 years, we are able to predict some issues that could arise and avoid them.”

Mobile-area officials and developers tossed dirt at a ceremonial event for the project last August.

“The groundbreaking ceremony was really special,” said Rogers. “This project would not have been possible without the support of Mobile County and the city of Mobile. Mayor Stimpson met numerous times with developers and investors, and his commitment helped win them over. The County Commission and the city both contributed financially. Councilman Levon Manzie was instrumental in promoting the project for his district.”

“Stewart's vision to see the waterfront as an unrecognized multi-family site was key to the project's success. There was a large crowd, and I think most people had to pinch themselves to make sure they weren't dreaming. Mobile is open for business, and the best is yet to come.”

“It's the first of its kind in Mobile,” said Speed, whose firm is teaming with Bristol Development Group on the highly anticipated project. “It's a fully amenitized, Class A, new construction, mixed-use multi-family midrise project. Downtown Mobile has a lot going for it, but needs more housing, as well as development near the waterfront.”

Speed noted that now is the right time to carry out the work.

“There's a void in the market for this type of product. Mobile is experiencing quality job growth and strong leadership at City Hall.”

Speed said likely residents of the new apartment complex will be people working downtown or near downtown, as well as anyone looking for an urban, walkable neighborhood experience.

“Meridian at the Port is already proving to be a catalyst for additional private investment in downtown Mobile, and for growth along Water Street near the Port,” he said. “We're excited to be part of such an impactful project.”

William Tynes, vice president of Birmingham, Ala., based Golden Construction, said the project is not without its obstacles.

“The concrete podium structure itself is the biggest challenge,” he said. “This is due in part to the 90,000 square-foot size, as well as coordinating the hundreds of plumbing penetrations and shear wall connections cast in the concrete.”

Existing piles from a former Delchamps warehouse also had to be addressed.

Encountering old foundations while driving piles was another concern.

“While driving the timber piles, we encountered existing concrete foundations below the surface,” said Tynes. “These were not part of the Delchamps building. We excavated and removed them, and backfilled with sand. We also encountered buried railroad tracks.”

“Also, the existing ground water elevation varies depending on the time of year, and was about two feet below the existing grade when we began excavating the pile caps. We are using a series of pumps to keep the water down far enough to allow us to install the pile caps,” said Tynes.

Work began in November 2017 and should be completed by August 2019.

“We just finished driving all the timber piles and we are pouring concrete pile caps,” said Josh Barnett, who serves as Golden Construction's project manager. We have also begun the concrete columns and walls that will support the elevated concrete podium. The Delchamps warehouse was on the site, along with a metal building. These buildings, along with the surrounding concrete and asphalt parking areas, were demolished.”

All parking for the complex will be at street level, with four levels of apartments above. The structure is a wood frame that sits on top of an elevated concrete slab over the parking level.

“A critical step in building the apartments is constructing the podium slab,” said Barnett. “Along with the reinforcing steel and post tension cables in an elevated concrete structure, there are hundreds of plumbing sleeves through the podium for the kitchens and bathrooms. These must be located precisely, since they are in post-tensioned concrete, so moving them after the concrete is poured is not an option.”

In addition to the plumbing sleeves, the wood structure has several shear walls that have to be anchored into the concrete podium.

“There are hundreds of anchor bolts and embed plates that have to be located precisely for the shear walls to function properly,” said Barnett. “We use a BIM model in conjunction with a robotic total station to locate these items to ensure they are in the correct location.

“After the podium, we will build four stair towers and three elevator shafts out of concrete block. Next is the wood structure, consisting of wood walls and prefabricated floor and roof trusses. The skin, consisting of brick veneer, Hardie siding and metal panels, will follow. While we are working on the skin, we will be installing the fire sprinklers, plumbing, HVAC and electrical rough-in, followed by the interior finishes.”

A pool and courtyard also must be constructed.

“The swimming pool is on top of the elevated concrete podium,” said Barnett. “First, we will build a structural concrete cradle to support the pool that will be over the parking level. We will install a layer of waterproofing in the cradle, and then form the shape of the pool with structural foam and gunite. There are several pipes from the pool to the pool equipment that require close coordination with the elevated concrete slab and beams. The pool deck will consist of 2'x2' pavers installed on pedestals.”

Barnett said that, so far, weather has not really been a factor, although the hurricane season is always a concern. That could be an issue, with the bulk of the work yet to be carried out.

“We are in the early stages, so most of the building has to be built.”

Excavation also has kept crews busy, with adjustments being made accordingly.

“After we demolished the Delchamps building, we found there were unsuitable soils that would not support the parking level,” said Golden Construction Superintendent, David Echols. “We undercut this area about two feet, and replaced the unsuitable soils with sand. We are also excavating the pile caps, which are as deep as six feet.”

Approximately 25,000 cu. yds. of dirt/material will be moved on the project. Several track excavators, all-terrain forklifts and a concrete pump are among the equipment performing tasks at the job site. Diesel water pumps, manlifts, a pile driving rig and a rough terrain crane also are required to complete the work.

Main materials being used during construction include concrete ranging in strength from 3,000 to 5,000 psi, reinforcing steel and post tension cables. Concrete block and brick masonry also are required, as well as wood framing material.

As for the most time-consuming part of the assignment, said Echols, “The concrete pile caps and structure account for 40 percent of the schedule. After the columns and walls are poured, we have to backfill the site, install all underground plumbing and utilities and pave the parking level before we can begin the concrete podium. So, we have about seven months of work before any wood framing can begin.”

Henry Cantwell, AIA, architect of Niles Bolton Associates, said the overall vision was to develop a project that acknowledges the industrial history of the area, while also creating a livable community.

“The main entry in the building is brick that complements the existing brick on the surrounding buildings. The metal panel is similar to the surround warehouse building of the docks,” he said.

For those who will ultimately call Meridian at the Port home, said Cantwell, “The takeaway for the residents should be that they are living in a community with all the modern conveniences, where they feel they are connected to each other, as well as the city of Mobile.”