“Without a right-of-way from the federal government, the pipeline could not cross these lands,” said Lesley Elser, a spokeswoman of the bureau. 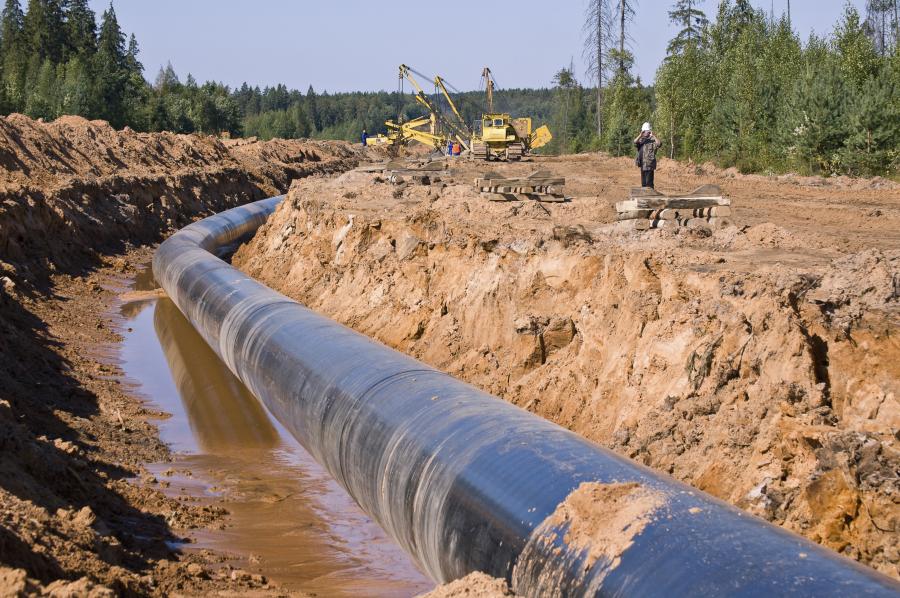 The Mountain Valley Pipeline nailed a major milestone Oct. 13 by winning the blessing of a key federal agency. But the company can't crank up the bulldozers yet.

The Federal Energy Regulatory Commission's order certifying the $3.7 billion interstate project noted that other federal and state agencies must weigh in before construction can begin on the 42-in.-diameter buried natural gas pipeline.

FERC observed that Mountain Valley “must obtain all necessary federal and state permits and authorizations, including the water quality certifications, prior to receiving Commission authorization to commence construction.”

Many pipeline foes have responded to FERC's approval of the Mountain Valley project by vowing to concentrate now on convincing other regulatory agencies that the pipeline's environmental, social and economic costs outweigh its benefits.

Could those efforts actually yield the opponents' most desired result, which would be stopping the pipeline? The odds seemed stacked against that outcome but opponents have vowed to try.

Carolyn Elefant, a former FERC lawyer who now often represents individuals and groups fighting pipelines, was asked whether she recalls any decisions by federal agencies that have halted projects.

“I have been involved in one or two cases where the [Army Corps of Engineers] has been very critical of the FERC environmental analysis and has required additional mitigation and/or conditions and taken more time to issue a permit,” Elefant said. “But offhand, I cannot think of a case where another federal agency denied an authorization.”

Carolyn Reilly, co-owner of a family farm in Franklin County that is on the pipeline's route, noted that FERC Commissioner Cheryl LaFleur, a Democrat, dissented when the commission approved the pipeline in a 2-1 decision. Commissioners Neil Chatterjee and Robert Powelson, Republicans who recently joined the commission, opted to green light the project. Reilly works with Bold Alliance, a group that's opposed too to the Atlantic Coast Pipeline, which also received FERC approval Oct. 13.

“As we witnessed FERC's new Trump-appointed commissioners steamroll over a seven-year veteran of the agency to rubber-stamp these pipeline approvals, we're now determined to persevere in pushing the powers of the state,” Reilly said Oct. 11.

“States must do everything they can to be a firewall against federally sanctioned fossil fuel projects that escalate climate disaster for our communities, our cities and our nation,” she said.

The pipeline's route would travel through a total of approximately 3.5 miles of the Jefferson National Forest. Construction there cannot begin without a right-of-way grant from the U.S. Bureau of Land Management, which is responsible for issuing such grants for pipelines across federal lands under the jurisdiction of two or more federal agencies. The Forest Service and the Army Corps of Engineers are assessing the environmental effects of the Mountain Valley Pipeline on the national forest.

Joby Timm, Roanoke County-based supervisor of the George Washington and Jefferson National Forests, said in September that the bureau anticipates a decision about the right-of-way grant by Oct. 31.

A bureau statement issued after FERC's release in June of the final environmental impact statement for the Mountain Valley Pipeline seemed to suggest the agency is poised to embrace the project. It quoted Karen Mouritsen, then the land management bureau's eastern states director and now an acting director in Alaska, saying that the pipeline, if approved, “will help fuel America's economy and help support good-paying energy sector jobs.”

The bureau's decision must be preceded by the Jefferson National Forest opting to amend its land and resource management plan to sanction variances necessary to allow pipeline-related impacts to soils, streamside vegetation, old growth trees and the Appalachian Trail and its viewsheds.

Rebecca Robbins, a Forest Service spokeswoman, said Oct. 20 that a decision about amending the plan will be announced once the agency completes the process of resolving objections to proposed amendments. The objection resolution period ended Oct. 14.

What would happen if the Bureau of Land Management declined to OK the pipeline's passage through the Jefferson National Forest, through land managed by the Forest Service and Army Corps of Engineers?

“Without a right-of-way from the federal government, the pipeline could not cross these lands,” said Lesley Elser, a spokeswoman of the bureau.

The Bureau of Land Management will not issue a right-of-way grant until the federal agencies managing the land have concurred with that decision, she said.

“If concurrence is not reached, the Secretary of the Interior, after consultation with these agencies, may issue the right-of-way,” Elser said in an email.

Secretary of the Interior Ryan Zinke was nominated by President Donald Trump, a vocal supporter of pipeline projects.

Natalie Cox, a spokeswoman of Mountain Valley, declined to say what the company might do if barred from traveling through the national forest.

“We are unable to provide comment or answer to speculation,” she said.

Mountain Valley also needs a permit from the Virginia Marine Resources Commission because the pipeline's construction will, as described in state law, “encroach upon” state-owned beds of rivers, streams or creeks.

Randy Owen, an environmental engineer with the commission, said its review is independent of federal Clean Water Act regulations, driven instead by state laws. He said Mountain Valley's plans to install a pipeline beneath the bed of 18 streams in Virginia with drainage areas greater than five square miles triggers a review of crossings in Giles, Montgomery, Roanoke, Franklin and Pittsylvania counties.

A recent legal ad placed by the agency inadvertently omitted Roanoke County. The commission plans to run the ad again on Oct. 25, Owen said. Although the ad will call for public comment within 15 days, the commission typically accepts comment for a longer period, he said.

“For any request that is denied, the applicant may re-apply [for a permit] in modified form,” Owen said.

Mark Haviland, a spokesman for the Army Corps of Engineers, confirmed Oct. 19 that the corps will review the Mountain Valley project under its Nationwide 12 permit process, which critics have described as a streamlined “blanket permit.” According to the corps, the permits “provide expedited review of projects that have minimal impact on the aquatic environment.”

If the Army Corps determines that a proposed project doesn't meet the terms and conditions of a Nationwide 12 permit — or if the proposed impacts are “more than minimal” — the applicant will be directed to apply for a different type of permit that would bring a more comprehensive evaluation by the corps, said Doug Garman, another corps spokesman. The project could still be authorized, but it could require a more rigorous evaluation process, he said.

Virginia's DEQ plans to make recommendations to the State Water Control Board about water quality certification and the Mountain Valley Pipeline during meetings Dec. 6 and 7 in Richmond. Separately, the department is reviewing erosion and sediment and stormwater control plans for the project. The deadline for public comment on those plans, which require DEQ approval but not a permit, was Oct. 15.

In September, the West Virginia Department of Environmental Protection announced it was withdrawing the Clean Water Act 401 water quality certification it had granted in March to Mountain Valley. The department's action followed litigation alleging its evaluation of the project had been inadequate.

On Oct. 17, the U.S. Court of Appeals for the Fourth Circuit formally vacated the certification, sanctioning the department's return to the drawing board — an action celebrated by groups that challenged the March decision.

“It is clear in its order that FERC is relying on DEP to fill the holes that the FERC certificate does not address,” she said.

The pipeline would be buried in a trench ranging in depth from about 5.5 to 9 ft., depending on terrain. The construction right-of-way would be about 125 ft. wide in most places and be cleared of all vegetation, setting the stage for potential erosion until vegetation is reestablished.

The full 303-mile route of the pipeline and its access roads would require about 1,108 water body crossings. About 216 miles of the route would cross shallow bedrock that might require blasting. About 67 miles would travel through karst landscapes characterized by sinkholes, caves, springs and underground aquifers vulnerable to contamination. The pipeline would cross thousands of acres of soils prone to erosion.

All these realities have raised significant concerns about impacts to water quality, leading many pipeline opponents to contend that anticipated violations of water quality standards should preclude certification by DEP and DEQ.

Opponents in Virginia of both the Mountain Valley Pipeline and Atlantic Coast Pipeline worry that Gov. Terry McAuliffe's support for both projects could sway the DEQ's recommendations.

“It's still not too late for Gov. McAuliffe — who has signaled his intentions to run for president — to be on right side of history and the climate fight and protect Virginia citizens from these dangerous, fracked gas pipelines,” Reilly said.

FERC's order approving the Mountain Valley Pipeline also included more than two dozen requirements or conditions that must be met before construction begins.

As one example, the project must identify prior to construction “the location of all water wells, springs and other drinking water sources within 150 ft. [or 500 ft. in karst terrain] of construction work areas and above-ground facilities” and must submit a plan for post-construction monitoring of these water sources.

On July 20, the Virginia Department of Conservation and Recreation observed that the 500-ft. criteria was arbitrary because “unanticipated releases” in karst landscapes “have the potential to travel more than 500 ft. and impact wells, cave streams and springs.”