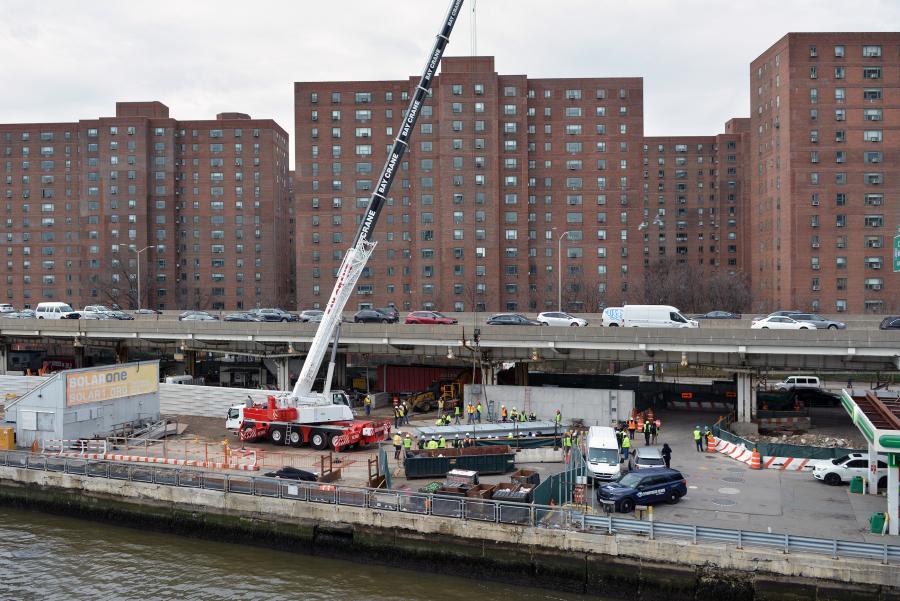 Commissioner Thomas Foley of the NYC Department of Design and Construction (DDC) announced that the first massive gate that will help protect the Lower East Side from future coastal flooding was installed Feb. 24 as part of the $1.45 billion East Side Coastal Resiliency project.

"Swinging and rolling gates are a critical design element of East Side Coastal Resiliency and allow for waterfront access while giving the city the flexibility to seal off areas before a future coastal storm or flood event," said DDC Commissioner Thomas Foley. "We look forward to completing flood protection for 110,000 residents and to the open space and recreation improvements that are included in ESCR."

The gate installed was manufactured by Linita Design & Mfg. Corp. in Lackawanna, N.Y. The $1.45 billion ESCR project is projected to be completed in 2026.

"East Side Coastal Resiliency will provide integrated flood protection for the surrounding community, and this movable gate is a significant step in making that happen. We continue to provide recreational resources and plant trees in the neighborhood while resilient park improvements are underway," said NYC Parks Acting Commissioner Liam Kavanagh.

ESCR will create an integrated 2.4-mi. system of raised parkland, floodwalls, berms and movable flood gates to create a continuous line of protection against sea level rise and the growing threat of stronger, more severe coastal storms worsened by climate change. The project has been designed to improve waterfront access through reconstructed bridges and entry points and also will upgrade existing sewer systems to capture and manage precipitation during storms.

Construction of ESCR began in November 2020 at Asser Levy Playground, with major construction beginning in April 2021. In June 2021, the city announced almost $140 million of additional funding to add more community amenities as part of ESCR, including new public restrooms, improvements to a park amphitheater and, in a separate capital project, $129 million for the new flyover bridge for the Manhattan Greenway. Approximately 650-ft. of the project's flood wall has been completed. 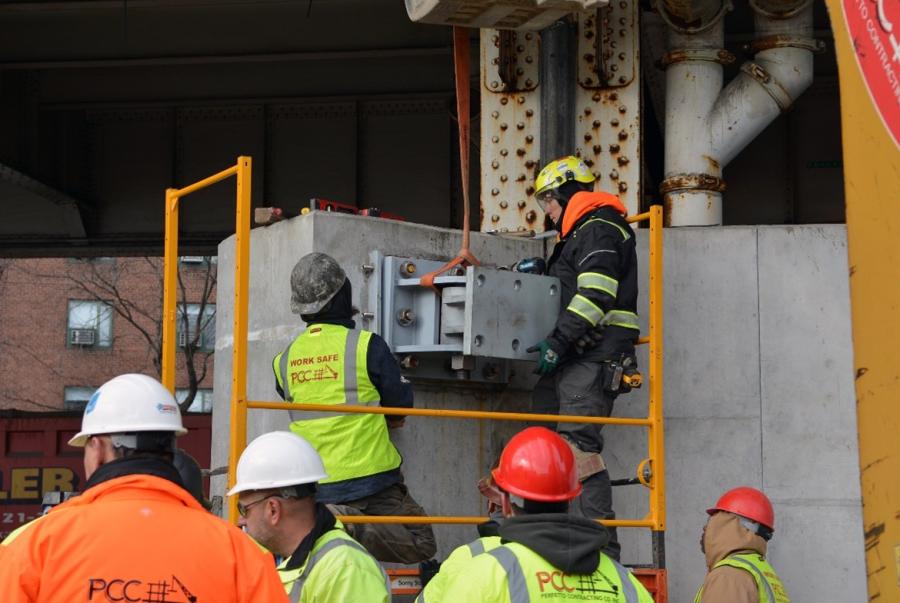 DDC, in coordination with the NYC Department of Transportation for traffic, pedestrian and bike lane detours, issues regular advisories to the community on progress and where future work will take place. DDC also has two full-time Community Construction Liaisons (CCL) for the East River Park section of ESCR. CCL Joyce Xin, who is bilingual and fluent in Mandarin Chinese, will keep the neighborhood apprised of construction progress and can arrange special requests. Xin works on-site and is directly accessible to the public at 929/844-0408 or by email at [email protected]

Sonia Quinones, who is fluent in Spanish, will further provide updates to the community. She can be reached at 347/628-8724 and via email also at [email protected] Residents south of East 15th Street wishing to receive notifications about construction activities can reach out to be placed on the distribution list. Residents also can sign up for the list or submit questions about the project here.

A separate CCL manages community updates and special requests in northern ESCR areas above East 15th Street. CCL Nadine Harris works at the site full-time and is directly available to the community at 347/572-3057 or [email protected] Residents interested in receiving project updates for areas north of East 15th Street can contact her to be added to the public distribution list for that area, or can submit their request here.

The level of flood protection provided by ESCR is equal to the region's "worst-case" anticipated 100-year storm in 2050, based on future climate change projections produced by the New York City Panel on Climate Change (NPCC), an independent body composed of climate scientists that advises city policymakers on local resiliency and adaptation strategies. The project uses an adaptive design that can accommodate the addition of two more feet of elevation throughout the project area should sea levels in the coming decades rise faster than current projections anticipate. 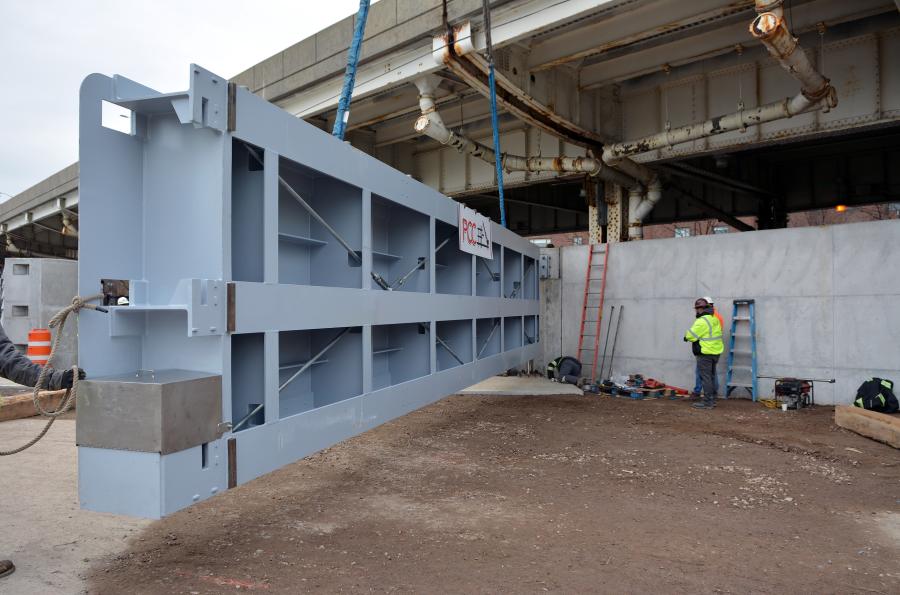 The first ESCR flood gate in place. The gate will remain open but can be closed in anticipation of storms or future flood events to protect 110,000 Lower East Side residents (DDC photo)

NYC Parks has been making numerous improvements to local parks and open spaces as part of the city's response to the community's need for supplemental recreational resources during ESCR construction. For more information on where to play and relax during construction, visit the Recreational Resources map. As part of a neighborhood greening effort, Parks also has planted more than 650 of a planned 1,000 trees throughout neighborhood parks and streets. This is in addition to the trees that will be planted in East River Park as part of ESCR.

In addition, NYC Parks and NYC Economic Development Corporation are transforming Pier 42 near the southern tip of ESCR into a new waterfront open space. The pier amenities will include a recreation deck with a soccer field, tennis courts, half basketball courts, adult fitness equipment and picnic tables, anticipated to be completed by summer 2022. An new upland park with a playground, comfort station, picnic area, lawns, designated bike path and waterfront views is anticipated to be finished by summer 2023. 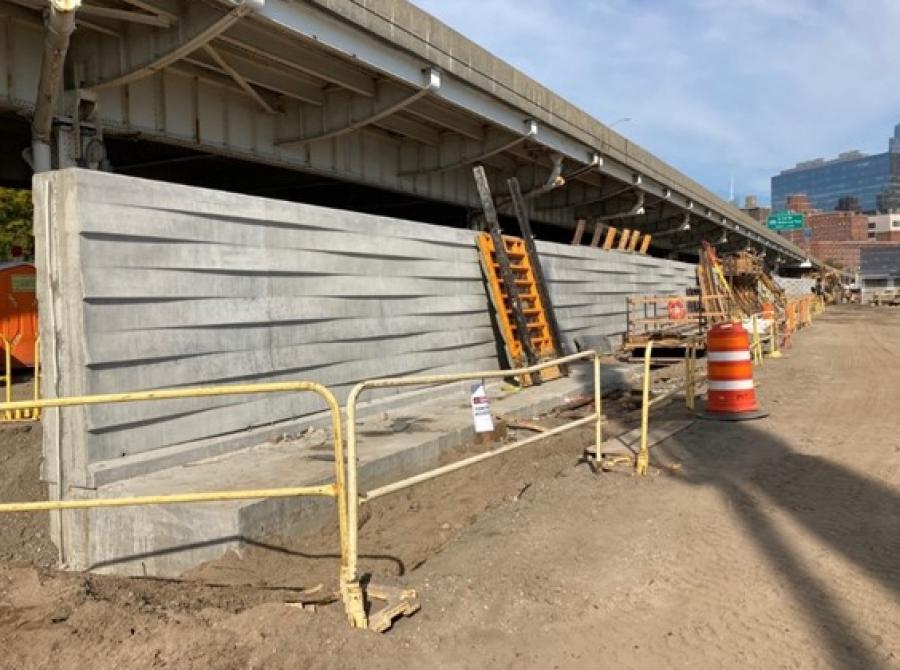 More than 800 ft. of new ESCR floodwall are already complete near the northern end of Stuyvesant Cove Park (DDC photo)

The city worked with local communities to reimagine entry to the park. Currently, East River Park is primarily accessed by steep, narrow switchback ramps. The Corlears Hook, Delancey Street, and East 10th Street bridges will be replaced with gently sloping entryways that will provide access for all New Yorkers, including those with disabilities. In addition, the Houston Street entry has been redesigned as an at-grade entry.

Increasing resiliency to climate impacts is a key objective of the project's landscape design. Approximately 2,000 new trees, of 50 different tree species, will be planted in the reconstructed, resilient park. This diverse palette of species was selected for its ability to withstand salt spray, increased precipitation, strong winds and extreme weather.

Following construction, the 1.9-acre waterfront Stuyvesant Cove Park will be rebuilt with a combination of floodwalls and floodgates along its western edge. The park's planting beds will be raised where possible to keep tree roots out of the range of future sea level rise. New irrigation systems will be installed and the waterfront esplanade will receive enlarged paving and planting areas as well as new furnishings and energy-efficient LED lights.

Phased construction schedules also are being employed in recreation areas outside East River Park to maximize public access to open space and recreational amenities throughout the entire project's footprint. 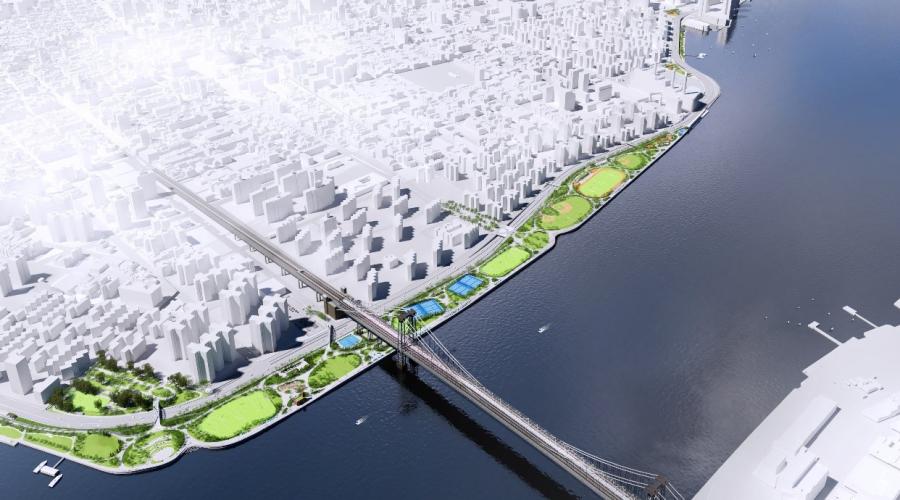 East Side Coastal Resiliency will use a series of berms, flood walls, flood gates and raised parklands to create a continuous 2.4-mi. barrier to protect 110,000 residents of the Lower East Side from future coastal flooding (DDC photo)