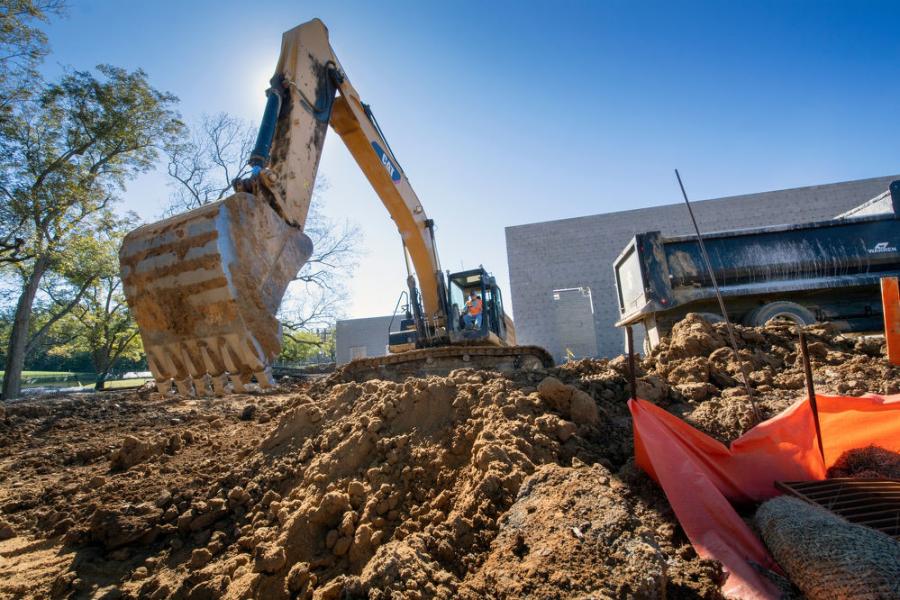 The equipment is being used to excavate for foundation, utilities and additional parking. It’s also being used to fill and compact various materials for all site improvements.

Faculty and students at Mississippi State University (MSU) are eagerly awaiting completion of a new structure that will boost the size and quality of the school's music department for years to come. Crews are constructing a single-story, approximately 40,000-sq. ft. facility located on one of the main entrances to campus, making it a signature building.

"The new building represents the architectural language that has been created on campus as adopted by the master plan and university," said Tim Muzzi, MSU director of planning design and construction. 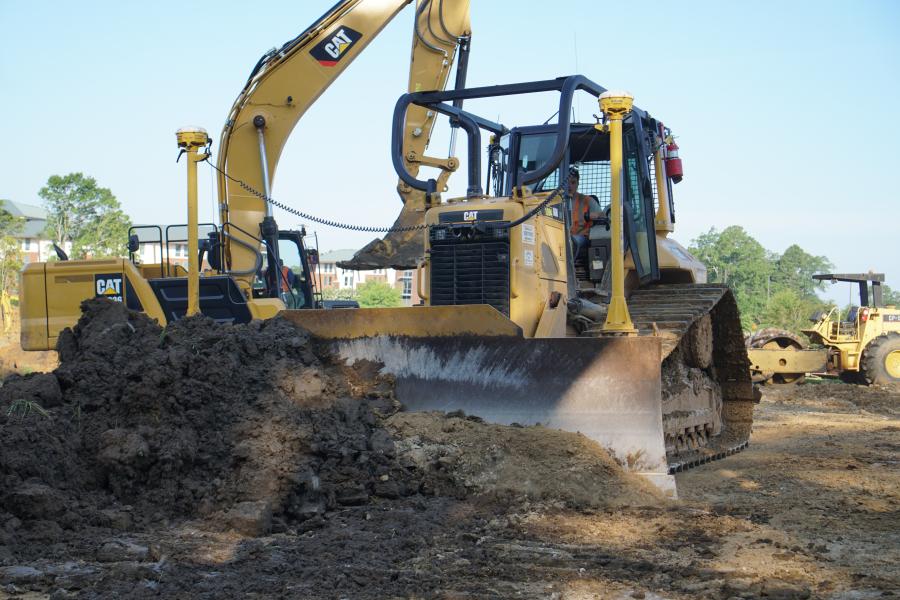 The new building, with a total project cost of $21 million, will be located next to the band hall and band practice field. The location places the entire music department in adjacent buildings.

"The selected design professional and his consultants had to have experience in similar project types. The design of the building had to consider the various sounds that would be produced within the building."

According to Hoppy Allred, owner of Allred Stolarski Architects, one of the chief concerns is ensuring the safety of the students, faculty and staff while performing construction on an occupied campus.

"This includes separating the construction activities from pedestrian circulation, maintaining safe vehicular traffic around the perimeter of the site and keeping construction traffic and deliveries out of campus as much as possible."

The project completion date is late fall 2021. Underground utility work has already been completed, along with removal and replacement of unsuitable soils with select fill material, rough grading, building staking and the construction of a new parking lot. 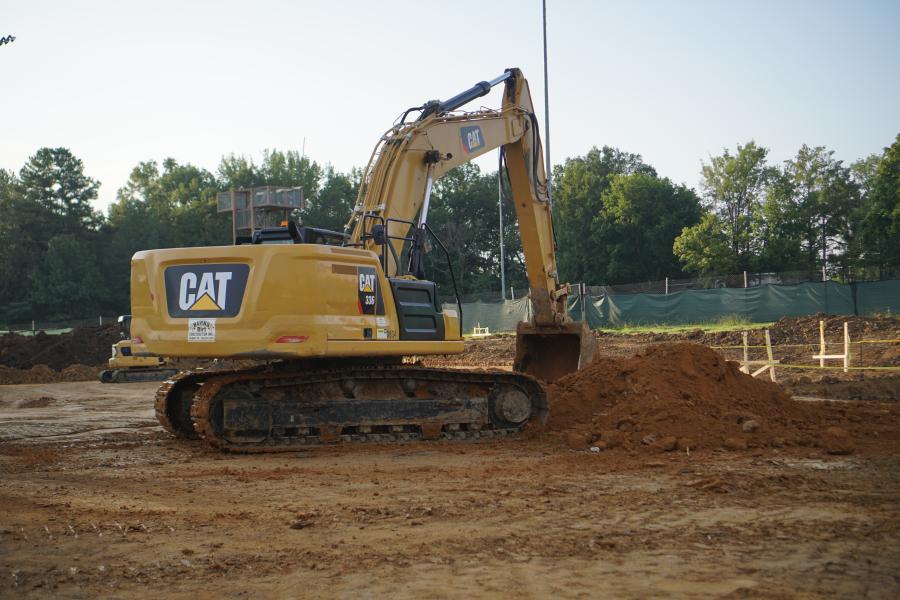 Currently, concrete grade beams and slabs on grade are being formed and installed. The work is progressing according to schedule.

Additional unsuitable soils underneath the building pad were discovered during demolition and excavation. These soils were removed and replaced with suitable fill material in accordance with the geotechnical engineering recommendations.

Allred said once the ongoing concrete foundation work is complete, the priority will be the installation of the steel superstructure, in order to allow for exterior walls and roofing to proceed. Once the building is in the dry, construction activities will be less affected by weather conditions, allowing the project to stay on schedule. 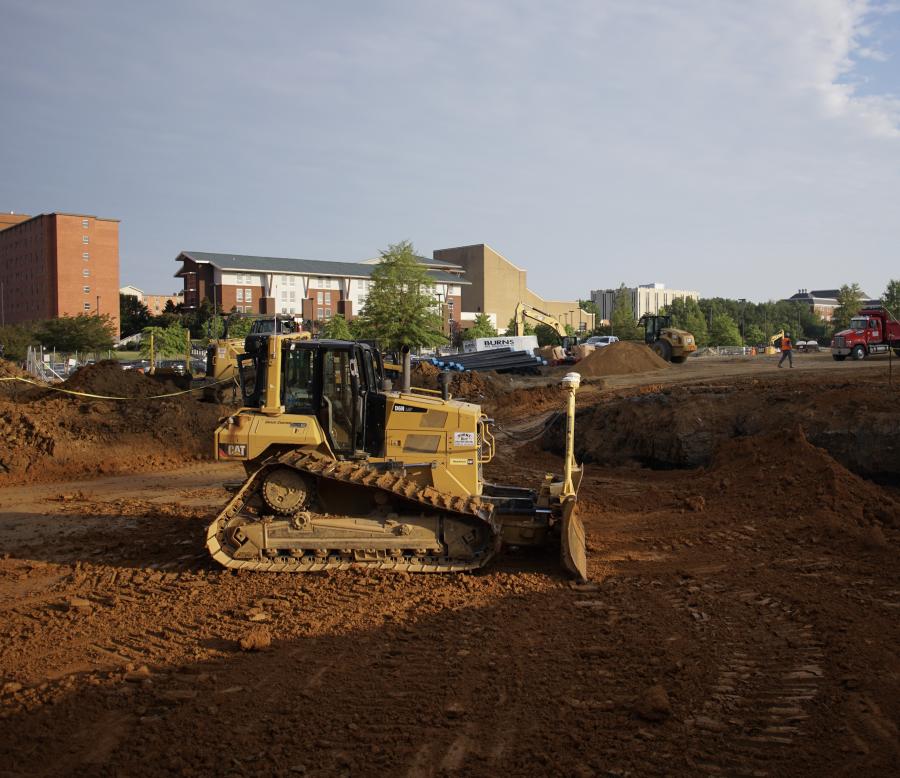 Allred said the most time-consuming part of the work will be the construction of the interior partition systems, due to the fact that many "standard" details do not apply to these spaces.

"The design of these walls includes utilizing a specially-designed metal stud system and incorporates multiple layers of gypsum board to achieve the required STC ratings for each room. Since these are not standard walls, many other details are impacted and must be coordinated."

Mac's Construction serves as the general contractor of the project, which calls for a variety of heavy machinery. The equipment is being used to excavate for foundation, utilities and additional parking. It's also being used to fill and compact various materials for all site improvements.

The site is being graded with high-tech Trimble GPS machine control guided heavy equipment. The cutting-edge technology is run on various heavy earthmoving equipment, such as Cat D6N and D6T dozers, Cat 329 and 336 excavators and various other support equipment. There also will be a Link-Belt crane mobilized onsite to erect the structural steel. The crane and other pieces of equipment will be used during the joist and deck phase, as well.

More than 50,000 cu. yds. of earth will be moved, and 5,000 tons of stone will be installed. Most of the excavation for the site involved a grassy hill, in order to fill in a low-lying area in between the band hall and the new civil engineering building to the north of the site. Excavating the hill was required to achieve a level surface for the new building. It was highly critical to install the storm drain piping and reroute certain utilities in order to construct the pit beneath the lecture hall. 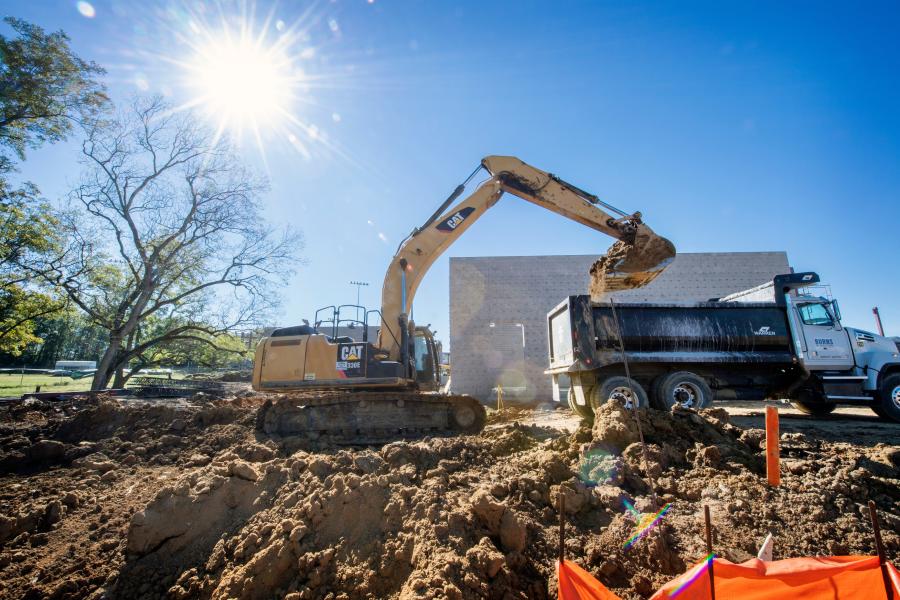 The new music building will contain a large lecture hall, whereby the department will be able to provide public lectures and solo and chamber music recitals. There will be individual classrooms for music education, music theory, music history, class piano, a computer lab, a recording studio and an entire wing dedicated to the choral music area. Faculty studios will allow for acoustically improved lessons for students, and the increased number of practice rooms will each ultimately contain a Steinway piano upon completion of the fundraising related to the All-Steinway School Initiative.

"The percussion area will have its own practice rooms and percussion ensemble rehearsal room," said Kopetz. "There also is a student lounge for our young musicians and new administrative offices that will all be part of the new facility. Studios for our string faculty are included in the building, along with a studio for classical and popular guitar instruction. Parking close to the building will allow those attending evening lectures and concerts to enter a facility designed for their learning and listening pleasure at a high level."

Kopetz added, "Community Music School students will study with world-class teachers during the afternoons and evenings, in a facility that is conducive to excellence in musical learning. In essence, the new music building will not only be an asset to the campus community, it will serve as a tremendous resource for the greater Starkville/Oktibbeha County area of Mississippi." CEG