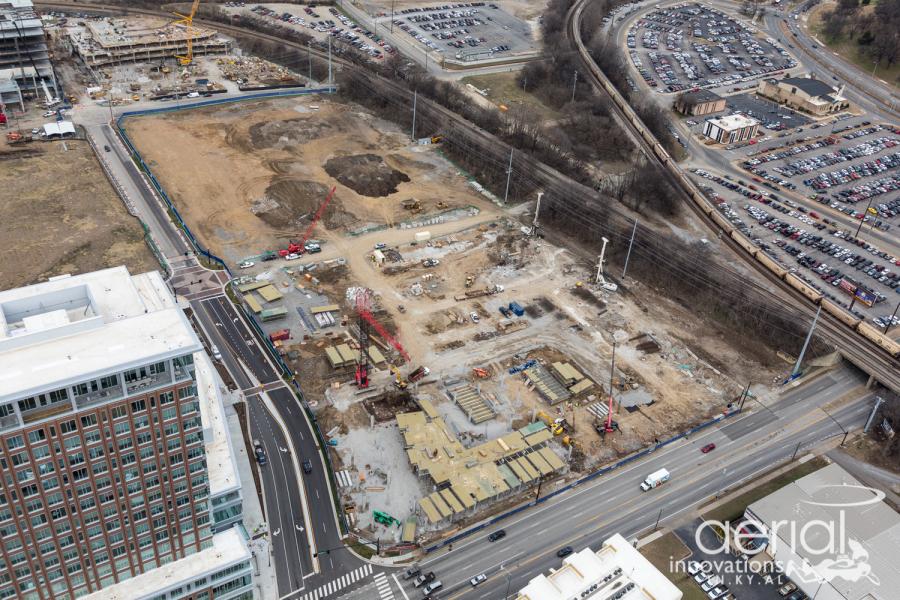 “The biggest challenge with this, or any project of this magnitude, is coordination,” said Austin Webb, project manager of Hoar Construction, which is currently building Capitol View's Block D and also will construct Block E. “We will contract with over 60 separate subcontractors and vendors before this building is complete, and each one is interacting with the others. Each of our trade partners relies on Hoar to ensure their work can be installed correctly and in a timely manner. We have worked with selected subcontractors for over two years to ensure the project is well organized and scope gaps are minimized.”

Hoar began its pursuit of the project in 2013.

“After running through several different design iterations, the current general schematic was developed. Hoar worked closely with all of the ownership partners to help influence a project that captured the design, but was also feasible within the time and budget constraints required,” said Webb.

The block, located at the northeast corner of Charlotte Avenue and 11th Avenue North, will be a mixed-use building consisting of ground floor retail, open loft-style office space and multi-family units.

“There are a total of 378 apartment units, loft style office space and restaurant/retail space on the street level,” said Webb. “The attached parking structure serves as a podium and will contain over 900 spaces of office, retail and tenant parking.”

“The office, retail and parking are located within a post-tension concrete structure, and will be finished per tenant specs. The multifamily units are wood frame structure with extensive interior and exterior amenities features including pools, golf simulators, wine and game rooms and saunas. All of this working within one large structure requires coordination between multiple contractors and cooperation from all trade partners,” said Webb.

Webb noted that prior to construction, the site featured a variety of properties and even items with historic ties.

“In the late 1800s, this area was known as 'Hell's Half Acre,' home to new European immigrants and saloons. From there, it was home to various businesses and residences, including an ice house, a service station, a car dealership and Greyhound bus station. We have uncovered cobblestone roadbeds and outdated trolley tracks during our site work. We found a large well lined with timbers, abandoned years earlier. We have discovered abandoned sewer lines dating to pre-civil war Nashville.”

Demolition was required in the early stages of the project, with extensive work needed to bring the site to its present condition. Trees and garbage left on site were removed, and grades were brought to a universal campus-wide level.

The current project is a miscellaneous steel package. The upcoming Block E project is a structural steel office building comprised of more than 2,200 tons of steel, with an erection duration of 15 weeks.

All work should be completed by December 2018. To date, there have not been any major setbacks.

Crews are expected to move more than 75,000 cu. yds. of material on the project, roughly 50,000 of which is soil. A variety of equipment is currently being used on site, including large track hoes, dozers, two large crawler cranes, two 36 in. diameter drill rigs and various smaller backhoes and lulls. Some of the main materials being used during construction include concrete, steel, masonry, EIFS and cement board siding.

Webb said coordinating MEP trades and making the building watertight will be among the most time-consuming tasks, adding there has been one unexpected issue crews have had to address.

“There's a large, 15-foot diameter active sewer line running between both projects that we must constantly be mindful of, as we don't want to risk a collapse from placing heavy machinery on this brick sewer from the mid-1800s.”

“Boyle's team in Nashville had the initial vision for revitalizing this under-utilized area,” said Alysha Buck, Cooper Carry project architect. “They then partnered with Northwestern Mutual and Northwood Ravin for the residential component. The client and design teams were all very inspired by the historic brick warehouses in The Gulch area. We wanted to incorporate their authentic details, rich texture and beautiful patina. The sort of authentic patina that builds up over time can't be reproduced, so we have re-interpreted those historic details into a modern design.

“The design needs to be very strategic and thoughtful in order to meet the needs of each individual use and arrange the pieces so they all work together. On Block D, for example, we have three uses stacked vertically on top of each other: residential apartment units sitting on top of office space, which then sits on top of retail and with a parking deck sandwiched in at the rear. Our team created a design concept that would seamlessly connect all uses while still maintaining the integrity of each product.”

Buck said the most satisfying part of working on Capitol View has been the relationships the design team has been able to build with the client and contractor teams.

“The primary inspiration for the design team is the raw, edgy quality of The Gulch as it exists today, said Buck. “Many of our material selections have drawn from that existing palette. We have also been inspired by the raw, exposed rock that can be found throughout Nashville. There will be a feature wall in the office lobby that was designed to honor that amazing texture.

“The entire development will be certified LEED for neighborhood development. In addition, the office tower will be certified LEED silver. I think the vibrant, urban atmosphere of the development as a whole is going to be one of its best features. Each of these city blocks is being designed to engage and activate the sidewalks, and the critical mass of the office tenants, hotel guests, residents and retail consumers will keep an exciting energy throughout the day. The site also sits adjacent to the future Greenway linear park — a great resource for commuters and residents.”

According to Buck, there also are some pretty spectacular amenities for the future residents of the apartments. In addition to a recording studio, wine cellar and indoor pool and spa, there will be an expansive outdoor pool deck with views of the Capitol building. There are two other courtyards with more intimate spaces, but the pool deck would be a great place to host a party.”

The Capitol View project includes two other major undertakings, one which is already complete. Along with partner Northwestern Mutual, Boyle Investment Company completed new infrastructure for the project, including new streets, sidewalks and utilities designed to provide a pedestrian-friendly urban gathering place.

“As we began our search for office space for HCA subsidiaries Sarah Canon and Parallon, we were drawn to the Capitol View site because of the location,” said Nick Paul, vice president of Real Estate of HCA Healthcare. “After conversations with Boyle and Northwestern Mutual, we knew we had found the right site and the right development partners because we share a common vision for Capitol View — a vibrant community that will mix business and residential development, while also helping to revitalize the North Gulch. We are very excited about building upon our 48-year history in Nashville through the opening of the HCA tower and completion of the Capitol View development.”

Lifeway sold its longtime headquarters campus to join in the revitalization of the North Gulch. In April 2016, Lifeway purchased a block at Capitol View and hired Boyle to develop their new 250,000 sq.-ft. headquarters. Construction is moving forward, with an expected opening by the end of 2017.

“I had certain high expectations when we entered into a partnership with Boyle to build our new headquarters,” said Dr. Thom Rainer, CEO of Lifeway. “We are well into the project, and I can say unequivocally every expectation has been exceeded. Here is the simple reality. If we were to do this massive project all over again, I would choose Boyle. Their execution, communication, professionalism, promptness and counsel have been nothing short of incredible.”

Skanska, which built the HCA building, is currently working on the Lifeway structure. Other Capitol View projects to be carried out include a dog park, playground, a yoga lawn and sand volleyball courts. The site is also a trailhead for the Nashville Greenway, connecting Capitol View to more than 190 mi. of biking and running trails throughout Davidson County.

The Capitol View project shines a spotlight on The Gulch, an area popular with locals, college students and visitors. Located in the heart of Nashville, The Gulch is a trendy area of urban development and redevelopment on the southwest border of the city's Central Business District, and is described as a mix of the old, the adapted and the cutting-edge.

A Gulch Business Improvement District was created more than a decade ago and is managed by the Nashville Downtown Partnership. In February, 2009, it was announced the Gulch neighborhood had been certified as a LEED Green Neighborhood. It was the first neighborhood in the South to receive such recognition.