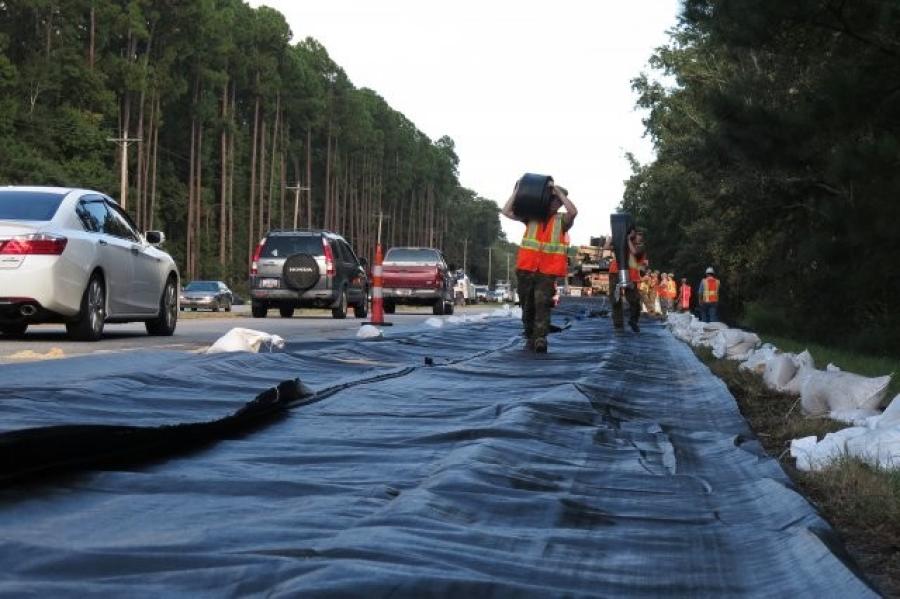 Soldiers from the South Carolina Army National Guard are assisting the state's Department of Transportation in constructing an AquaDam to keep Highway 17 open from Georgetown to Myrtle Beach during the flooding as a result of Hurricane Florence.

With Highway 17 serving as a major conduit along South Carolina's coastline, the mission to keep the roads clear is one the Department of Transportation has undertaken and has enlisted the help of Soldiers from both the Infantry and Air Defense Artillery to ensure it happens. Highway 17 will act as logistical lifeline to communities impacted by the rising waters.

Construction of the AquaDam is new to the engineers of the state's transportation departments and the National Guard. Leland Colvin, deputy secretary of engineering with SC DOT, said using AquaDams across the roadway was the first time it had ever been deployed for this reason to his knowledge. AquaDams are typically used to secure infrastructure from flooding. Using the AquaDam will raise the elevation of the road by four ft. If this plan fails, the National Guard has the 125th Multi-Role Bridge Company staged further downstream to employ its ribbon bridge to ferry relief supplies and response vehicles to Georgetown.

As rivers in parts of the state have crested at record levels, the water flows directly to the ocean through Winyah Bay and the Sampit River.

The Guard's engineers had already assisted the SC DOT with constructing another type of barrier using Hesco barriers on Highway 501 between Myrtle Beach and Conway.

"We could not do it without them," said Leland Colvin of the National Guard's assistance.

Colvin said the Guard Soldiers have helped with everything from setting up the AquaDam to running forklifts and transportation needs.

South Carolina Army National Guard Staff Sgt. Scotty Hill, a squad leader with Alpha Company, 1st Battalion, 118th Infantry Regiment, is one of the dozens of Soldiers working on this stretch of highway. Hill has been activated for previous State Active Duty including Hurricane Matthew in 2016, Hurricane Irma in 2017 and the historic floods in 2015.

"The community itself has been overwhelming," Hill said. "It's far greater than we could ever expect."

Prior to the AquaDam mission here, the company had been in Conway and Moncks Corner assisting local law enforcement at traffic control points.