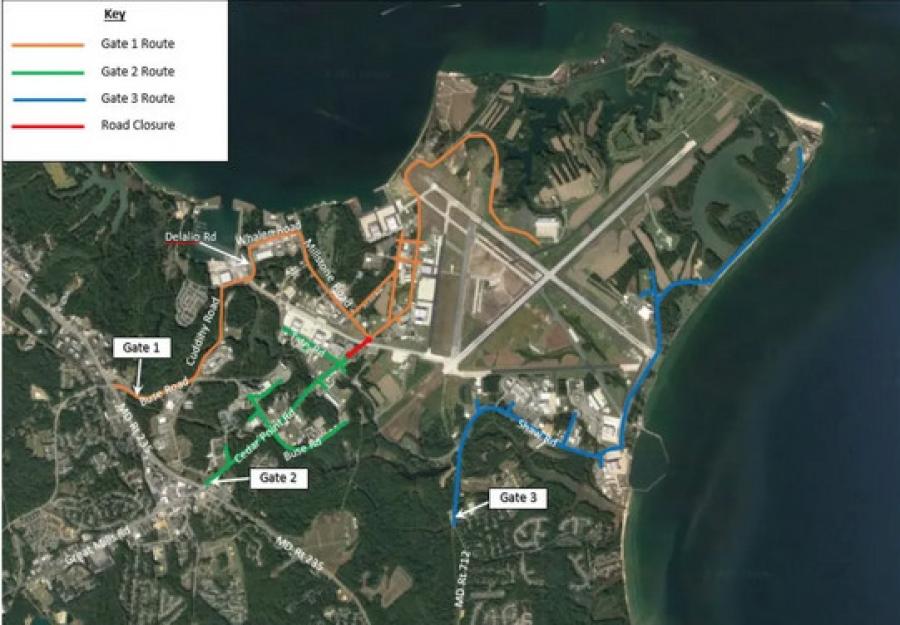 The primary goal of the naval air station’s new study is to evaluate the levels and patterns of traffic at the intersection before commencing with the proposed work: the repair and construction of Taxiway Alpha repair and an eventual fence line enclosure of the entire airfield itself.

The intersection of Cedar Point Road and Taxiway Alpha at Naval Air Station Patuxent River in southern Maryland will be closed throughout October as officials conduct a traffic impact survey related to upcoming airfield construction projects.

The naval air station is in St. Mary's County on the Chesapeake Bay near the mouth of the Patuxent River, 70 mi. due south of Baltimore.

It serves as the headquarters of the Naval Air Systems Command (NAVAIR), the U.S. Naval Test Pilot School, the Atlantic Test Range, Patuxent River Naval Air Museum, and is a center for test and evaluation, and systems acquisition relating to naval aviation.

The primary goal of the naval air station's new study is to evaluate the levels and patterns of traffic at the intersection before commencing with the proposed work: the repair and construction of Taxiway Alpha repair and an eventual fence line enclosure of the entire airfield itself.

Before construction can begin on either job, NAS Patuxent River's command leadership wants to decide on the best way to move traffic around one of the busiest intersections at the base.

"What we're trying to see with this exercise is the impact to existing traffic levels of an initially temporary, but eventually permanent, closure of that intersection," said Capt. John Brabazon, NAS Patuxent River commanding officer.

"As one of our main thoroughfares on the installation, it's important we understand the degree to which we can shift traffic patterns for upcoming construction projects that eventually will close it to traffic entirely. Taxiway Alpha will require maintenance that would shut the intersection down anyway, but this will also give us the opportunity to see what the impact will be when we eventually enclave the entire airfield for security purposes."

Objectives for the traffic survey will be to evaluate Fire/EMS/Security's ability and timeliness in navigating access routes in the event of an emergency, assess traffic volume on surrounding roadways and entry/exit points on the base, and determine the impact on roadway infrastructure due to redirected traffic.

Drivers entering the base via Gate 1 will be directed to Cuddihy Road on to Delalio, Whalen and Millstone roads for points north within the facility. Vehicles using Gate 2 will be able to drive on Cedar Point Road up to either Buse Road to link up with Cuddihy Road, or Tate Road where they can either drive northwest or southeast.

"We understand this will be an impact to some drivers' routines and schedules, but that's the point of this survey," added Brabazon. "We want to know exactly how traffic is impacted so that we can make it better by the time we eventually have to close that intersection for good."

NAS Patuxent River seeks the public's opinions on this project prior to the intersection's closure. A public comment is currently under way until Sept. 30 and will be open for all to provide input. Emails may be sent to naspaxriverpao@gmail.com or via the Patuxent River Interactive Customer Evaluation (ICE) site at https://ice.disa.mil/index.cfm?fa=site&site_id=808&dep=DoD?target=_blank.