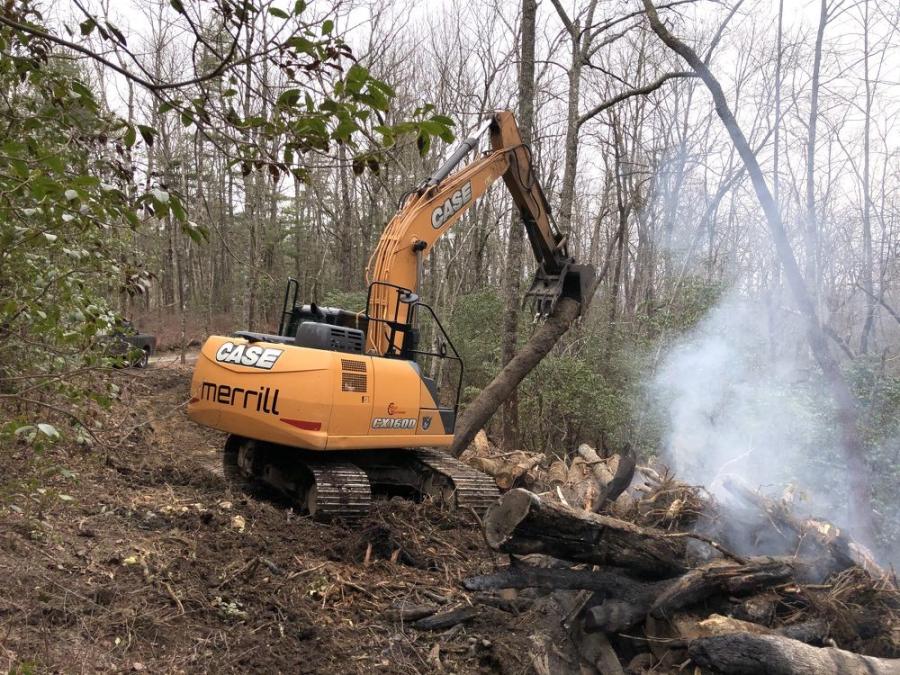 Joffrey Merrill said he knew he could use a Case CX160, which even at 40,000 lbs. would easily move anywhere he needed it.

Joffrey Merrill has a cool job.

Not only does he love his work, but he gets to do it outdoors amid the splendor of the southern Appalachian Mountains of North and South Carolina. The area where he operates his excavating company is beautiful but rugged country, particularly in and around his home base of Penrose, N.C., southwest of Asheville.

The highlands of southwestern North Carolina and northeastern South Carolina have many peaks and several lakes bordered by high-end residential developments. It is here that his company, Merrill Excavating and Construction LLC, often works with luxury home builders to construct mountainside/lakeside dwellings, many of which offer spectacular vistas.

"Today, we are at the site of a project, for a Brevard, N.C., builder, that I believe was part of an old family property," he said on a recent morning. "We are building about a 600-foot driveway up to a new house that sits on top of a hill. One of the luxuries of being able to live in western North Carolina is that when we are done, on a clear day, the owners of this house will probably have a 20- or 30-mile-view looking toward the mountain communities of Cashiers and Highlands."

The home-building market in the resort region itself has experienced peaks and valleys over the past two decades, but Merrill started his company after other contractors he trusted assured him that he could be successful building large homes in the area. 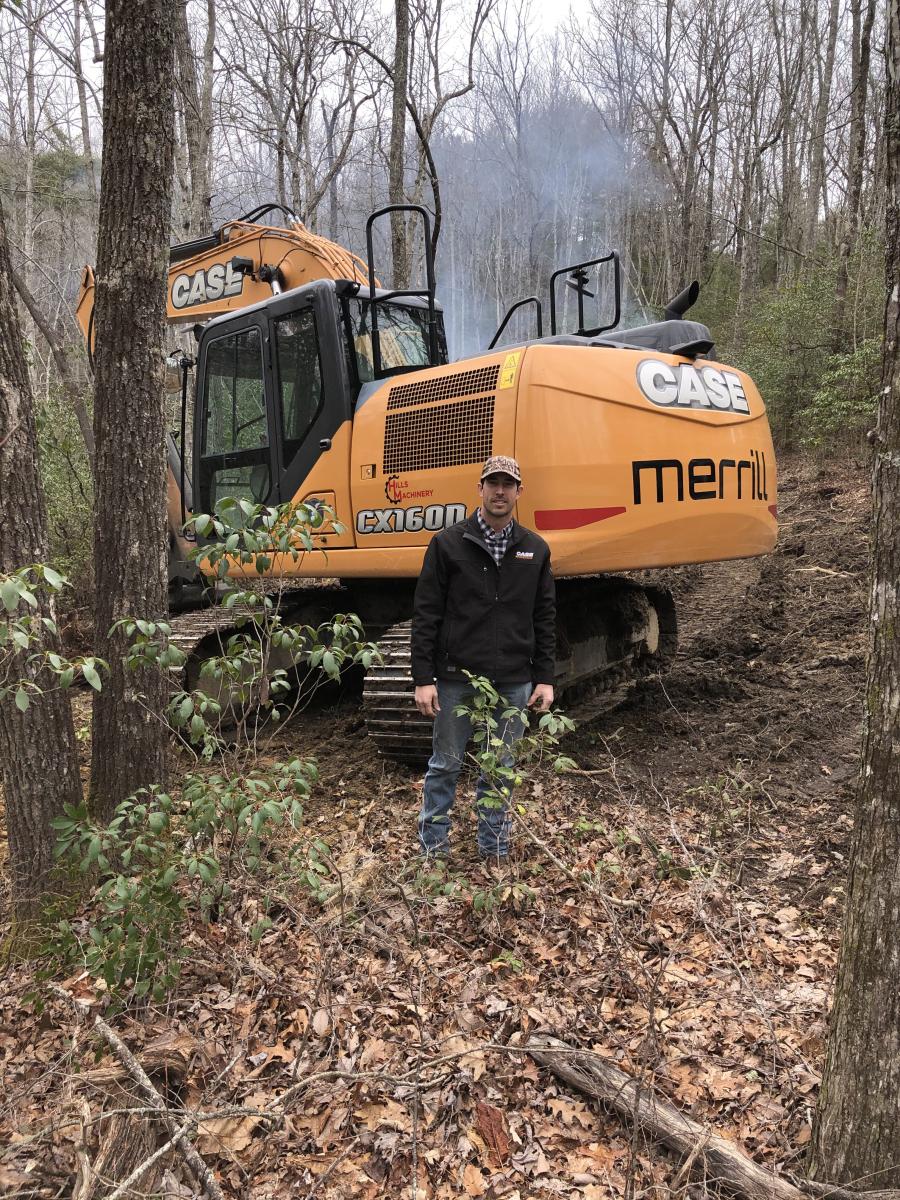 "When I started working for myself, the majority of my contacts were people in high-end development in upstate South Carolina around Lake Keowee," he said, referring to a reservoir that's shores are dotted with large vacation homes. "In the first few years, probably 80 percent of our projects were on lakes in South Carolina and 20 percent here in North Carolina. With my family here, though, I have been trying to dial back the South Carolina work and concentrate on projects closer to home here in western North Carolina. Now, our work here can be found from the town of Cashiers, in the west, to Asheville in the east — all of which is in the mountains."

He said that the people who want luxury or vacation homes in the mountains don't normally purchase lots of five to 10 acres; rather, Merrill's company is used to working on homesites sized only one to two acres. But, he added, many of the jobs are for people that have bought two or three adjacent lots in high-end developments.

"That opens up room for us to work," he said. "For them, they prefer a buffer between their property and their neighbors, plus they want a 6,000- or 7,000-square-foot house, which is hard to build on a one-acre lot."

Typically, Merrill's projects begin when the home builder gives him a full set of site and foundation plans so he can submit a bid that will include everything from clearing and grubbing to the house site, the driveway and digging the basement.

"We get involved in quite a bit of the hardscapes too — retaining walls, boulder walls — and then we are back later in the project to do the backfilling and the finish grading," he said. "I think there is a gap on the job site between what a rough grader does and what a landscaper does. We try to fill that space with our finish work."

Merrill's Love of Equipment Led to His Career

Merrill explained that he didn't grow up dreaming about running a construction business, but he did like being around equipment as he had been brought up on a farm.

A 2001 graduate of North Carolina State University in Raleigh, Merrill's degree was in horticulture and turf grass management, which, he admitted, "is a long way from grading."

His first job was at Turf Mountain Sod in Hendersonville, N.C., where his job called for him to spend a lot of time on heavy machinery.

"We did all our own grading, land-leveling, ditching and farm work and that is where I really got hooked on running equipment," he said. "After that, during the recession, I went to work in Landrum, S.C., for Greenspace Outdoor Construction, a big landscape and hardscape company, as a project manager. They had me overseeing the grading side of the business.

"But, as the economy started coming back, the owner of that company, Brandon Smith, who is now my best friend, kept pushing me to start my own business. It was a scary thought, but he kept telling me ‘The work is there; we will find you the work.' Brandon single-handedly gave me the courage to start my company. He helped me get my first half-dozen jobs, which led me to begin regularly working for two or three builders down there before I came back home and did projects for a few more builders in North Carolina."

The beginnings of great endeavors are always humble ones.

For Merrill's new company, he started out using an old dump truck, which he bought after getting a loan from his father and repaid with interest.

"I also had a rubber-tire skid steer, which I got from my uncle who owner-financed it," he said. "My first trackhoe was a 28,000-pound Komatsu PC130 machine that I bought after convincing the bank to give me a second mortgage on my house, which is not at all financially smart, but you have got to do what you need to do to get started." 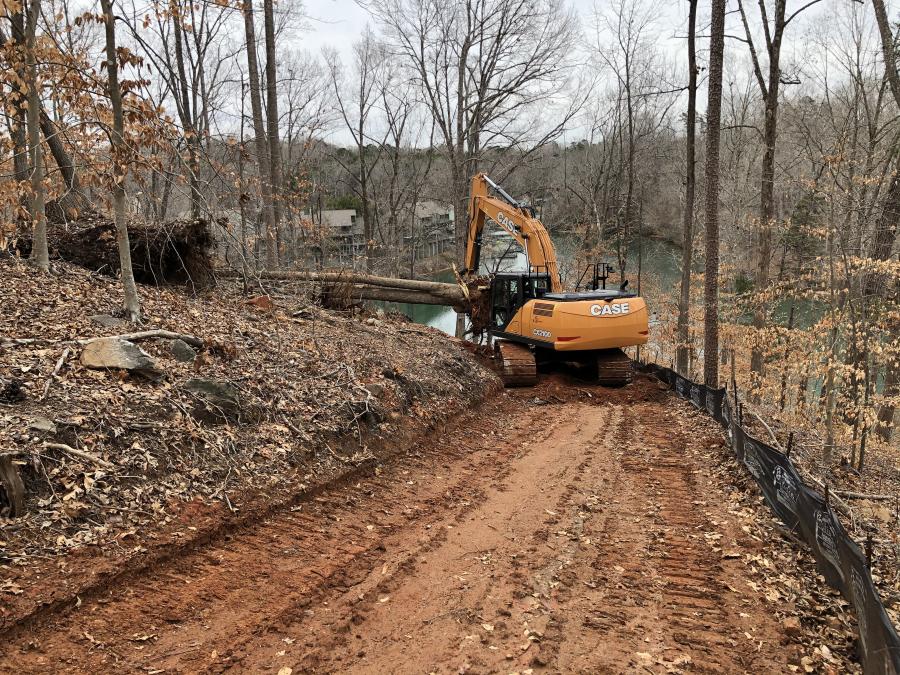 He no longer uses the piece, but said, "We got so busy I got a Hitachi EX120 excavator, which is in the same weight category as the Komatsu, and we basically ran each of them into the ground. When it was time for us to step up and get a newer machine, I knew we could use a Case CX160 that even at 40,000 pounds would easily move anywhere we needed it."

That was when he started using the services of Hills Machinery, the Carolinas dealer of Case equipment. The company maintains eight locations in the two states, including one in Asheville, N.C., and another in Greenville, S.C. — both of which Merrill has an established and warm relationship with.

As a result, he now primarily uses Case equipment on his projects.

After acquiring the Case CX160, Merrill added a CX80C excavator, too, which he described as being the perfect machine for his crews to use in building the boulder walls and do the finish work on his home sites.

"You would be surprised at how many sites there are without any timber on them," he said, "allowing us the room to do the whole thing with that Case CX80."

But what first attracted Merrill to Case was the price point on its models.

"I had an older bulldozer from another maker at the time that had nothing wrong with it besides having some age," Merrill said. "The guys at Hills Machinery gave me a smoking deal on a 17,000-pound Case 650M dozer that was in their rental fleet. That thing will knock down the competition and outwork any other machine in its class. Since most everything we do is residential one-lane driveways and leveling out single pads, the Case 650M is the best dozer for our new construction."

In 2021, Merrill also added a Case 210D excavator to his rolling stock, a machine that he said is the biggest he has ever owned. With its thumb and wider track, the full-size Case weighs in at about 52,000 pounds.

"The 210D is too big for a lot of residential sites, but when you work on one with big trees, a long driveway and more clearing to perform, it is hands-down the best machine."

Getting a ‘Fair Shake'

In the beginning, he said, Merrill Excavating and Construction utilized the Greenville branch of Hills Machinery as it was close to his other South Carolina projects.

"But I also just liked the entire feel of the place, from the operations manager, Gary Nations, to the South Carolina salesman, Robbie Ervin, that I first worked with on getting the Case CX160," Merrill said. "Then I got to know the North Carolina salesman, Kerry Nix, who has helped me get the CX80, the 650M dozer and the CX210D. They are all top-notch folks. 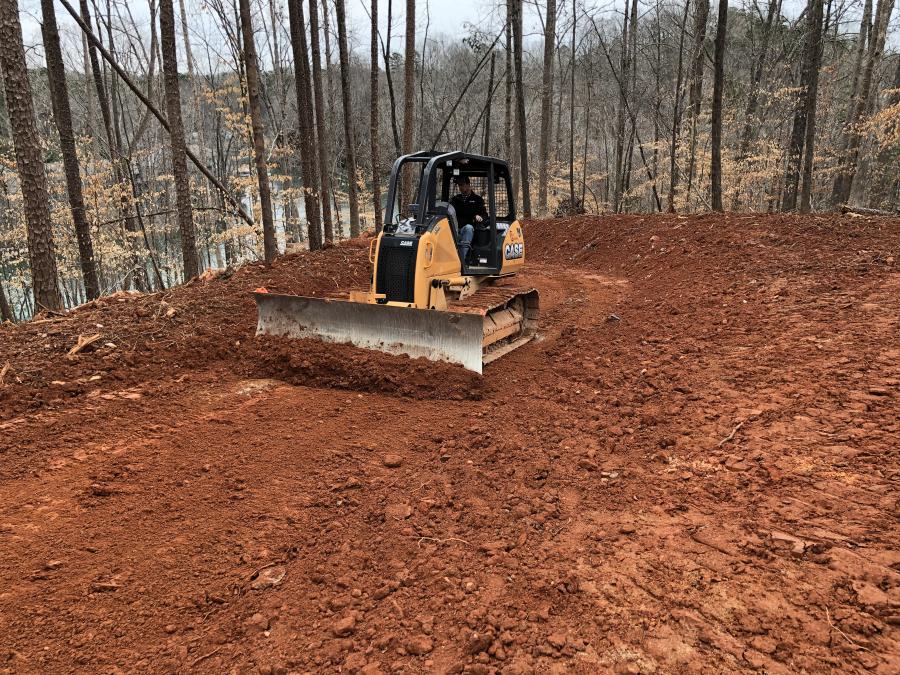 "I have not met a more honest group of people at a place where I am buying equipment and have never left there thinking that I had been taken advantage of — I've always felt that I had gotten a fair shake."

Merrill's satisfaction also extends to the service departments at the Hills Machinery locations he has called on. In addition, he said their equipment maintenance has been very responsive and, along with Case's comprehensive ProCare heavy machinery support, "cannot be beat."

Benji McKee runs the service department in Hills' Greenville branch and, Merrill said, is always available when he calls to get help with problems, although he admits there haven't been many with his Case equipment.

"Somebody from service will come right out to help," he said. "I'm not a mechanic and I don't have time for that, but with Case's ProCare, you're covered. The Case CX160, if you bought a new one, comes with a standard three-year, 3,000-hour full machine factory warranty. You can also extend that warranty another two years to get it up to 5,000 hours. That's what is important to me, the amount of value you get from an equipment maker.

"Plus, the Hills' brothers seem to have a real knack for hiring the right folks because everybody there is so honest and personable," Merrill said. "I have never had a complaint about Hills Machinery." CEG