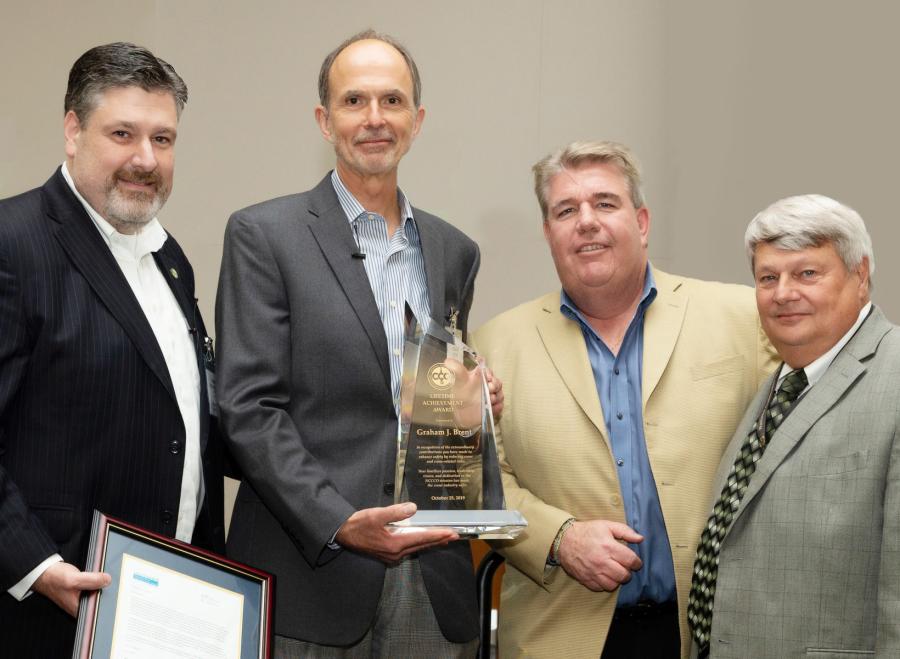 The National Commission for the Certification of Crane Operators (NCCCO) has awarded its inaugural Lifetime Achievement Award to its founding CEO, Graham Brent.

Brent, who recently stepped down from NCCCO to lead the NCCCO Foundation, had served as the organization's chief executive since 1996. The award was presented at the 4th Industry Forum on Personnel Qualifications in Crosby (Houston), Texas, by Thom Sicklesteel, who took up the position of CEO of NCCCO on July 1.

"I'm humbled and deeply honored to receive this award," said Brent. "The progress we have made over almost 25 years in improving worksite safety through NCCCO certification is profound and is a tribute to the tireless efforts of our dedicated and committed industry experts that have been with us throughout the journey. I feel privileged to have had the opportunity to contribute to this initiative which we now know conclusively has saved lives and avoided the pain and heartbreak of injury for so many."

"It's a great pleasure to be able to award our very first NCCCO Lifetime Achievement Award to one person who has been associated with NCCCO from the very beginning," said NCCCO President Kerry Hulse, who chaired the original task force that led to the creation of NCCCO in 1995.

IUOE General President James T. Callahan said, "Graham's fingerprints are all over the success of NCCCO, much of which is due to his tireless work in bringing all parties, labor and non-labor, to the table with a lot of different viewpoints but all with the same safety goal in mind."

In thanking Brent for his contributions to NCCCO, Sicklesteel commented that this was an appropriate point in NCCCO's development to create a Lifetime Achievement Award.

"Given the success of NCCCO certification and the closing of an important chapter in regulatory development with the publication last year of the OSHA crane operator qualifications rule, this is the right time to start recognizing individuals who have paid a lifetime commitment that has impacted our industry for the better," he said.