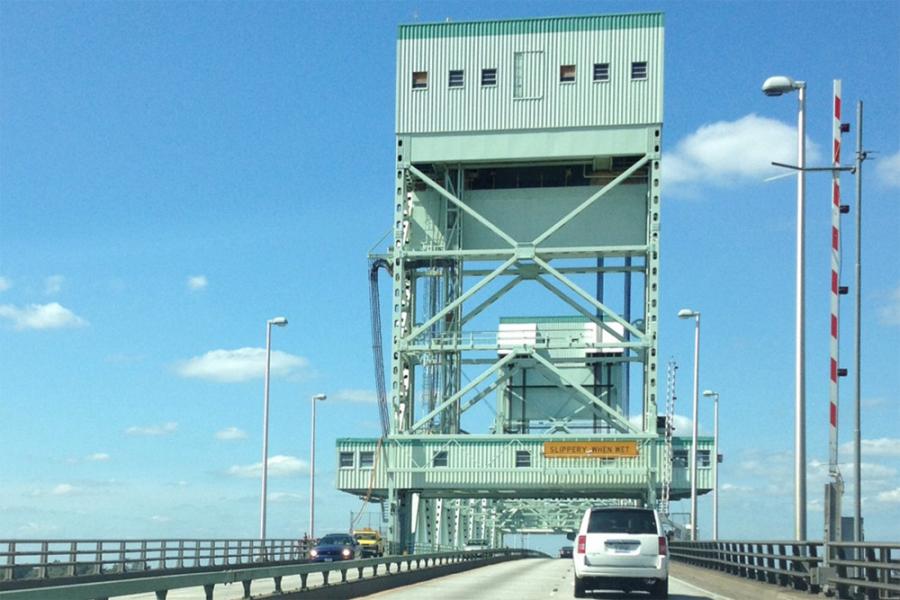 NCDOT will present its findings from a three-pronged approach for replacing the Cape Fear Memorial Bridge in late summer. (Port City Daily photo)

In February, Wilmington, N.C., government officials revisited the city's alternative funding options for the replacement of the Cape Fear Memorial Bridge, a contentious topic that straddles the line between necessity and unfavorable financing options.

Despite that, the bridge replacement remains a high priority for various local entities, reported Port City Daily, an online source of Wilmington-area news.

The city's Urban Area Metropolitan Planning Organization (WMPO) passed a resolution at the board meeting to ask the North Carolina Department of Transportation (NCDOT) to explore all options, including tolls and previous proposals, for replacing the 53-year-old structure across the Cape Fear River.

In discussing its legislative agenda on March 30, the WMPO board talked of moving the replacement of the bridge to its highest unfunded priority.

"It goes to the top, stars, [is] highlighted, [and has] neon signs going toward it," said Deb Hays, a WMPO board member and New Hanover County vice chairperson.

The Port City Times reported also that NCDOT Division 3 Engineer Chad Kimes gave an update to the board and said a committee, comprised of NCDOT staff from both his division and the agency's Raleigh headquarters, as well WMPO Executive Director Mike Kozlosky, was formed almost immediately after the resolution passed in February to begin exploring possibilities.

"We have done a lot in the last few weeks, to be honest," Kimes explained. "This is rapid-movement research we're doing here, but we're trying to uncover every limb we can."

The Key Crossing Needs an Upgrade

The Cape Fear Memorial Bridge provides a key link for the more than 62,000 vehicles that travel U.S. Highway 17, U.S. 76, and U.S. 421 between Brunswick and New Hanover counties each day, just south of downtown Wilmington.

The steel vertical-lift bridge first opened to traffic in 1969 and sports a 408-ft.-long lift span that can be raised 135 ft. to accommodate ships passing underneath.

Now, however, NCDOT said the bridge is nearing the end of its usable lifespan. That, along with rising annual maintenance costs, and the difficulty in obtaining replacement parts, makes it imperative that a new bridge needs to be built.

Kimes told the WMPO board that the state agency is looking at a three-pronged approach to the river bridge replacement: traditional delivery, conventional toll delivery. and alternative delivery.

A traditional design-bid-build project would require the Cape Fear Memorial Bridge to score high on the next round of NCDOT's State Transportation Improvement Program (STIP), but it did not do well on the last prioritization round, a fact that frustrated local leadership.

STIP is a multi-year capital plan for scheduling and funding state projects across the U.S. based on a scoring matrix. The program allows the allocation of federal and state money for such projects.

While the STIP is a 10-year plan, NCDOT updates it every two years to ensure it accurately matches the agency's financial situation and statewide needs.

For the replacement of the Cape Fear Memorial Bridge, NCDOT will update a feasibility study for the span, including cost estimates, to indicate where the project might fall on the next round of STIP prioritization.

As of now, though, no funding is available for future projects since NCDOT is over budgeted by about $12 billion, according to the Wilmington news source; however, President Biden's bipartisan $1.2 trillion Infrastructure Investment and Jobs Act (IIJA), which he signed into law last November, should infuse added money to the state.

With a major source of STIP funding coming from North Carolina's gas tax, concerns arose from Jonathan Barfield, a WMPO board member and New Hanover County commissioner, about how the state's clean energy plan and the increased presence of electric vehicles will affect the tax.

"As we see more hybrid and electric vehicles on the road, it's definitely going to offset money coming in from the gas tax for the state," he said at the March 30 meeting. "We need to be having this conversation at a local level and recognize the dollars are dwindling."

Initial discussions around the idea of a toll bridge over the Cape Fear River sprung up in 2021 when NCDOT presented WMPO with an unsolicited bid from a private investor. The company intended to bankroll the construction of a new bridge by instituting tolls for at least 50 years.

The proposal came from a team of construction and engineering firms, supported by anonymous financial backers, who would assume the risk involved with design, construction and maintenance of the Cape Fear bridge project for a time. NCDOT would keep its ownership and oversight for regular inspections, according to Port City Daily.

But, after much debate, WMPO voted against it 7-5 last July.

At the February 2022 meeting, WMPO officials revisited the discussion after the Wilmington Chamber of Commerce and Brunswick County passed resolutions expressing their support of alternative options for the bridge replacement. The Town of Leland on the west side of the river also passed a resolution asking for the bridge to be included in the STIP.

Following that, the WMPO board passed a similar resolution requesting all options be explored.

To pursue the feasibility of this route, NCDOT will look to its Toll Project Development Policy, implemented in 2018 with guidelines to "improve the department's ability to manage a reliable transportation network, address congestion, leverage limited financial resources, and provide more user choice," according to information on the transportation agency's website.

Like the unsolicited bid NCDOT received earlier, alternative options also are in the mix for consideration, the Port City Times noted.

"We would send out a request for information to see if there's any innovative solutions for another approach," Kimes told the WMPO board.

According to NCDOT's phased-in strategy, innovative solutions could include "buildability concepts and financial alternatives."

As was mentioned at an earlier WMPO meeting, the original proposal is "not the only game in town." Bids could come from a variety of sources around the nation.

NCDOT said proposals will be screened for viability, including technical, environmental, engineering and legal, as well as financial. All screening analysis will be presented to the WMPO board for consideration prior to further pursuit.

Kimes told the online Wilmington news site that there are some things NCDOT will not consider for funding a replacement bridge.

For instance, he explained that it is not within NCDOT's authority to request special help or appropriations from the North Carolina General Assembly. Additionally. local funds will not be included in any analysis, the agency noted, unless specifically requested by WMPO.

"We hope to have all this wrapped up by late summer to give you our findings," Kimes told WMPO.