Lincoln South Beltway crews began working on bridge pilings and the support structures that will hold up a flyway crossing over U.S. 77 that westbound drivers will use to go south toward Beatrice.

Most large cities have a loop around the city center to divert traffic from the downtown area and to enhance traffic flow. Lincoln, Neb., has been dreaming of a beltway since the 1960s, but until the Build Nebraska Act was passed in 2011, designating one-quarter of 1 percent of sales tax for expansion of the expressway system, federal high priority corridors and preservation of the existing transportation system, the Nebraska Department of Transportation wasn't able to commit the resources necessary.

The Lincoln South Beltway is the largest and possibly most complex infrastructure project NDOT has launched. The project will connect U.S. Highway 77 and Nebraska Highway 2. The east-west 11-mi., four-lane freeway is designed to reduce congestion on N-2 through Lincoln and improve safety and mobility.

Passage of the Transportation Innovation Act and a partnership with the city of Lincoln, Lancaster County and the U.S. Department of Transportation enabled NDOT to secure funding and prioritize the project. Additional funds were acquired in 2018 — an award of a $25 million in federal funds through a TIGER grant — which helped to significantly shorten the construction schedule and ultimately save tens of millions of dollars. 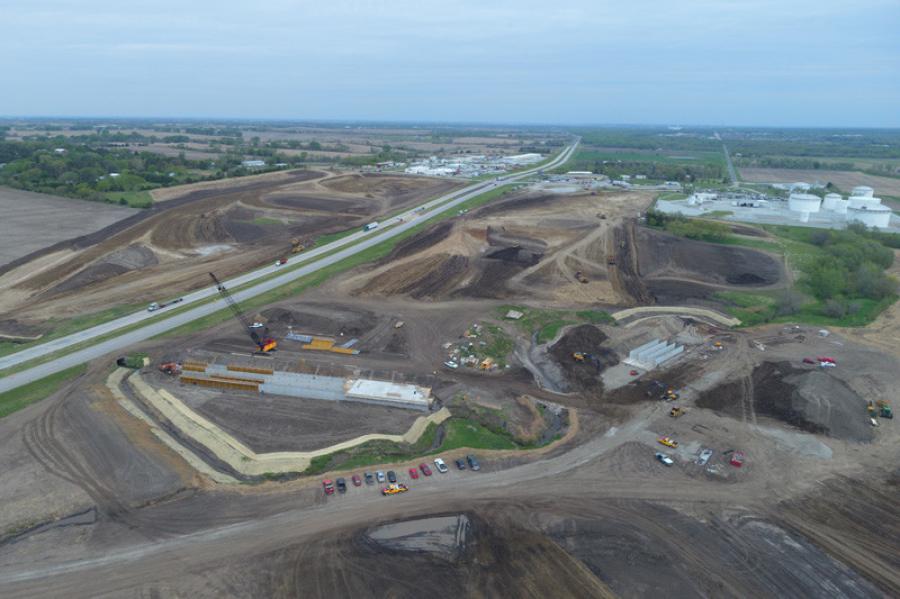 With funding in place, NDOT let the project to bid in December 2019. Hawkins Construction Co. of Omaha was the only bidder and subsequently won the contract at $352,191,375, entering into a unique partnership contract with NDOT to extend payments for work completed beyond the project completion date.

However, funding woes weren't over. In 2019, Hawkins announced that, due to the instability of the market as a result of COVID-19, it was unable to finalize its financial package under the original contract that required the contractor to obtain financing to cover costs throughout the duration of construction and NDOT to make quarterly payments to them. The pandemic scared investors in the municipal bond market just as Hawkins was ready to initiate bond sales, but the market recovered quickly and bond sales succeeded in filling the financial gaps.

NDOT came up with an innovative "pay-as-you-go" option that will accelerate construction, shaving four years off the project's timeline while maintaining the original eight-year payment period laid out in the phased construction approach.

Construction began in February 2020 and is anticipated to be completed in spring of 2024.

Work was scheduled to begin on May 1, but Sarah Soula, external affairs manager of NDOT, said that "would have been a big challenge" to the aggressive schedule. Pre-bid, NDOT agreed to allow offline work to begin prior to that date as long as submittal requirements were met. This allowed mobilization of the project to start in February. Crews were continually added to project until they were at "full stride" on May 1, 2020, when they hit official NTP.

NDOT allowed an early Notice to Proceed for work not affecting traffic.

"This was key to having a good start to the project," Soula reported. "We were able to mobilize equipment and subcontracts, complete removals of tracts and get started on early drainage and grading items." 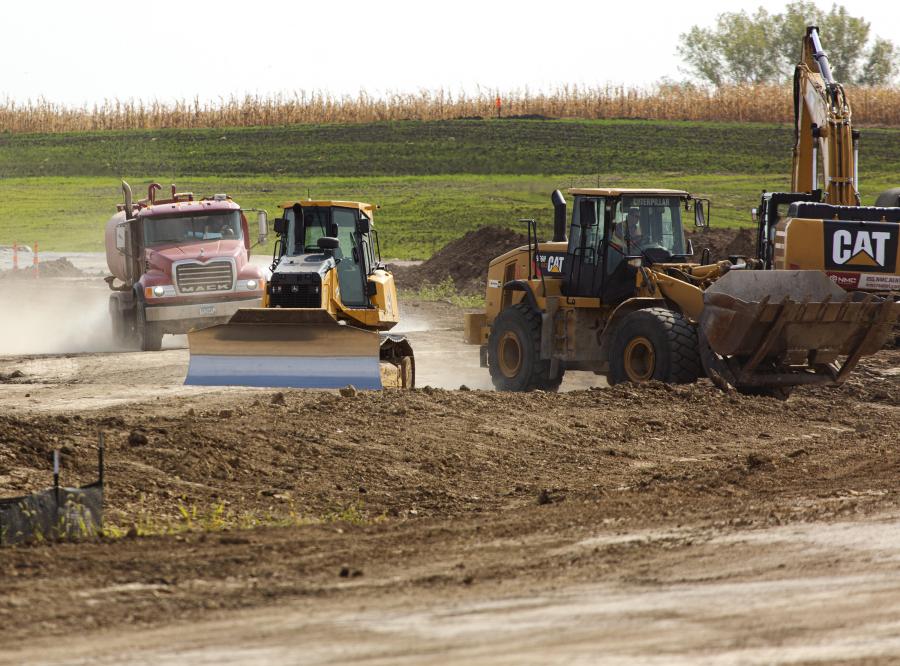 Ames Construction out of Burnsville, Minn., is responsible for completing the grading for the project in its entirety. In order for the project to be successful, Ames would have to move more than 4 million cu. yds. of dirt this year, Soula indicated.

"To complete this took an extremely coordinated effort and project communication from numerous team members," she said.

Soula said this is a "major grading project that is extremely weather-sensitive."

Ames' plan to complete the project is to utilize onsite excavation for the embankment. She lists excavation available at 7,187,244 cu. yds., and the embankment neatline at 5,306,512 cu. yds. In total, 8 million cu. yds. of dirt — including topsoil — has to be moved.

In addition to the dirt work, crews have completed the majority of box culvert structures required along the route. Due to scheduling and phasing, 14 of the box culverts are precast, with the remaining 25 cast in place. Soula called box culvert operation "typical," with precast boxes being set by a Cat 349 excavator or a 110-ton crawler crane.

Bridge work and concrete pavement operations are only beginning to ramp up, Soula said. Crews will build 21 bridges, 18 of which will use precast girders, the remaining three featuring steel girders. To set the girders, bridge crews will use cranes ranging from 110 to 200 tons.

Crews began working on bridge pilings and the support structures that will hold up a flyway crossing over U.S. 77 that westbound drivers will use to go south toward Beatrice. Before bridge building begins along the bypass linking U.S. 77 to N2, dump trucks will continue hauling dirt from the eastern edge of the project to the western edge to build up the bridge approaches, according to Curt Meuting, NDOT construction engineer overseeing the South Beltway project.

Crews also are preparing the dirt for concrete pours on the future eastbound lanes by dumping lime. Trucks will be loaded by Cat 349 size hoes, Soula said.

"The grading operation requires significant equipment," Soula said. "On average, they have 70 pieces of equipment."

Rental side dumps will be used on what she dubbed a "typical placing operation" with more than 90 trucks onsite at peak.

Constructors Inc., of Lincoln, Neb., will complete half of the concrete paving, half of the precast pipe and all of the asphalt paving.

"The grading operation required significant equipment to complete," Soula said. "On average, they had 70 pieces of equipment" onsite to complete 63 miles of roadway pavement. Paving operations will use standard equipment, For local cut to fills, crews will use tractor and pan fleets as well as scraper fleets."

Project officials closed the existing Saltillo Road that intersects U.S. 77, shifting traffic south to a temporary intersection in order to allow work to begin on a new Saltillo Road interchange. It's a task Soula said required "significant coordination." She credited a "highly-effective partnership approach" embraced by NDOT, the engineers, GC Hawkins and the subs.

Crews are digging down at the point where the freeway will pass under a bridge to be built for Saltillo Road traffic to cross. Excavators on the banks fill semis that traverse one-way paths down the slope built explicitly for moving dirt.

The area for the freeway extending past 98th Street has been cleared to be ready for paving to start mid-2021.

The West Interchange at Highway 77 and N-2 is the critical path of the project, Soula indicated.

"NDOT has detailed Phasing Plans to follow to allow Highway 77 to remain open over the course of construction," she said. "For the project to be successful, we had to get through numerous phase/traffic changes this year."

After waiting decades to begin, the Lincoln Beltway project has an aggressively expedited schedule, anticipating substantial completion May 1, 2023 — three years after Notice to Proceed — and final completion April 30, 2024 — four years after NTP. 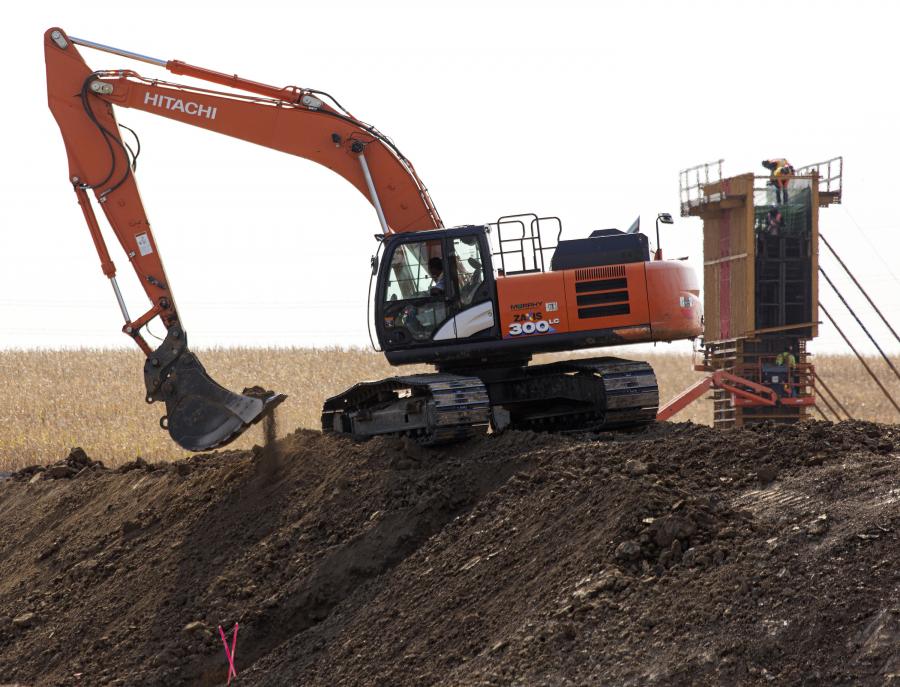 Despite that fast-paced schedule, crews have not needed to work nights, according to Meuting, although they are working six days a week and the occasional Sunday.

The only schedule interruptions to date have been weather-related, when rain prohibited recycling dirt removed from one section of the project for use elsewhere onsite. Even the novel coronavirus hasn't slowed work.

Joining Hawkins, Ames and Constructors Inc. are ME Collins of Wahoo, Neb., and Van Kirk of Sutton, Neb.

Chris Hawkins, COO of the company that bears his name, told the press that he expects more subs "to join the approximately 200 professionals, 100-plus trucks and 100-plus pieces of other major equipment onsite" as work progresses.

Meuting believes that effective communication and coordination have enabled the team to manage such a massive project and kept work on target to meet the three-year deadline.

Overall, Hawkins told the press, "We are very pleased with the progress, which is on schedule." CEG