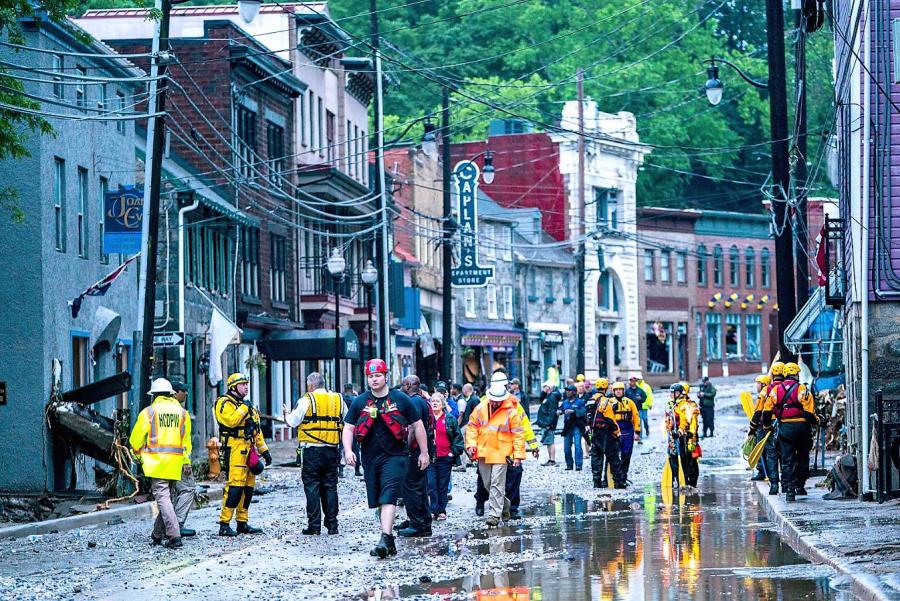 The tunnel, now planned to run from 8800 Frederick Road to the river, will divert water cascading into the steep-sided valley during storms. Ellicott City, Md., has endured devastating washouts 16 times since 1817, including the two most recent in 2016 and 2018.

Nine buildings that were previously set to be demolished as part of the Safe and Sound plan for Ellicott City, Md.,'s flood mitigation efforts will now be saved, Howard County Executive Calvin Ball announced March 25.

During a news conference in Ellicott City, Ball also said the planned tunnel commonly referred to as the North Tunnel will be extended, stretching 5,000 ft. parallel to Main Street. By extending the tunnel, the plan to remove the nine county-owned buildings in the West End area became unnecessary, he explained.

The strategy originally called for the boring of a 15-ft.-wide tunnel running 1,600 ft. and 80 to 100 ft. deep along the north side of Main Street from Lot F on Ellicott Mills Road to the Patapsco River. The tunnel, now planned to run from 8800 Frederick Road to the river, will divert water cascading into the steep-sided valley during storms.

Several deep stream valleys converge at Ellicott City, notably the Patapsco River and its tributary the Tiber River, which increases the risk of flooding, but at the same time creates the town's heights.

The town, southwest of Baltimore, has endured devastating washouts 16 times since 1817, including the two most recent in 2016 and 2018. Those flash floods led to severe damage to the historic downtown each time as well as two deaths in 2016 and another two years later.

The change to the flood mitigation plan comes after Howard County heard concerns from community members about the buildings that would need to be removed if the original plan were implemented. The buildings include former homes as well as the old Earlougher's Tavern, a historic building on Frederick Road dating back to the 1800s.

"As I stated before, I will not hesitate to adapt as our plan needs," Ball said.

The tunnel expansion includes four benefits, according to Ball: reducing water levels, negating the need for some other projects, saving homes and historic properties, and being cost-neutral. The previous plan with the shorter tunnel and West End projects was estimated to cost about $74 million, according to Mark DeLuca, deputy director of Ellicott City's Department of Public Works, and the cost will remain the same for the tunnel extension.

"The extended North Tunnel is designed so that during high water or flood conditions, all excess water will go into the tunnel, stay off of the street, and the existing stream channel will not need to be modified," Ball said.

The West End buildings that were previously set to be demolished were part of a series of conveyance projects to channel water down to the Patapsco and avoid homes and roads. Extending the North Tunnel eliminates the need for two culvert projects on Frederick Road, as well as a berm/bypass project on Main Street, the county said.

DeLuca said the municipality intends to maintain the buildings during the construction portion of the Safe and Sound plan and return them to residential structures once flood mitigation efforts are complete.

Ball also said the timeline for completion of the extended North Tunnel is shorter than that of the previous tunnel plan and the West End projects.

In order to begin tunnel construction, the Howard County needs subterranean easements from several property owners. The county's goal is to begin construction in 2022, pending the availability of funding and receiving the necessary permits and authorizations.

"This is a significant change to our plan but one that achieves the goals we have always set out to achieve: less water on the street, fewer buildings that need to be removed and, more importantly, a safer town for all," Ball said.

Nick Redding, executive director of Preservation Maryland, said at the news conference that preserving the nine buildings will help protect the character of historic Ellicott City.

"Preserving this unique place has always been and always will be a balancing act with growth and the demands of a changing and often unpredictable climate," he noted.

Howard County is still waiting to hear if it has been approved for the Water Infrastructure Finance and Innovation Act funding from the federal Environmental Protection Agency. In January, the county was selected to apply to finance flood mitigation projects including the North Tunnel. Ball said that the funding would cover the entirety of the extended tunnel project.

If the county receives the funding, which he stated he was confident would happen, it can borrow up to 49 percent of the cost of the Safe and Sound plan. The remaining 51 percent would be funded by Howard County and through other sources. The county would not have to repay the loan until construction is complete.

The entirety of the Safe and Sound plan is estimated to cost $113 million to $140 million and be completed by mid-2025.