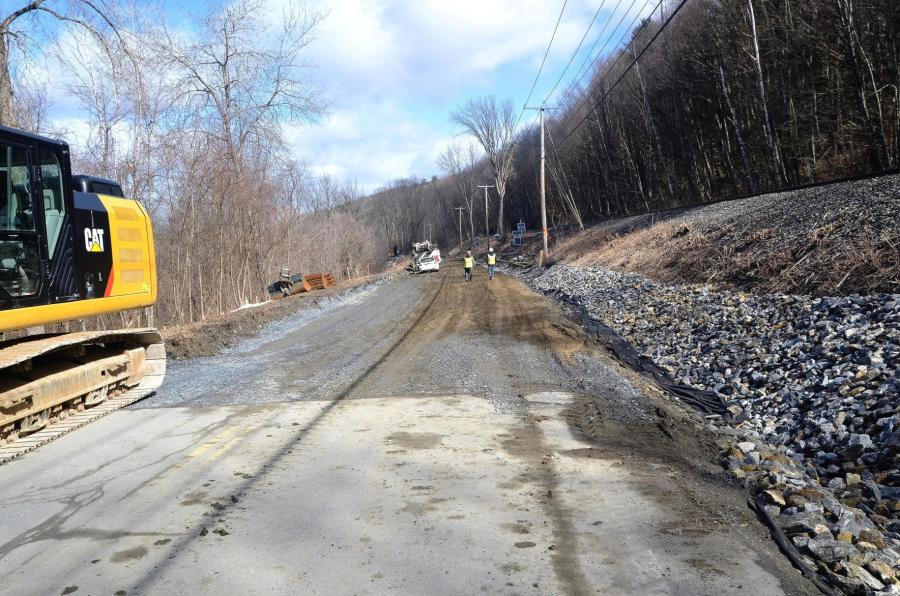 Workers with Casella Construction continue repairs on Route 12 south of Charlestown after having removed the asphalt and concrete base in the damaged section of the road. Officials with the New Hampshire Department of Transportation have decided to reopen the roadway at the end of May while engineers continue to rethink a new way forward. (Christopher Shaban/Eagle Times Staff photo)

As a temporary measure, New Hampshire highway officials will reopen state Route 12 through Charlestown to vehicles at the end of May while engineers develop a new long-term plan to stabilize the road, weakened by heavy rains last summer.

The Eagle Times, published in nearby Claremont, reported that repair work on NH 12 resumed April 18 after more than a month-long stoppage due to complications that arose during the construction, according to a statement released by Kathleen Mulcahey-Hampson of the New Hampshire Department of Transportation (NHDOT).

The important highway along the Connecticut River in the southwestern part of the state connects communities such as Charlestown, Walpole and Rockingham, Vt.

In her statement to local community officials on April 19, Mulcahey-Hampson said that repairs to make NH 12 drivable to motorists will take approximately six weeks to complete, barring unforeseen weather delays.

"The immediate repair is an interim solution, subject to the same conditions and issues that cause the road to be closed [at the present]," she noted. "Additional drainage work is planned, which will improve conditions to some degree. [The NHDOT] will continue to monitor the roadway while the alternative analysis is being done to determine a long-term solution."

Construction initially began in January to repair the 600-ft. section of NH 12, which collapsed in July 2021 after an overabundance of rain, followed by flooding, eroded the highway's ground support.

NHDOT awarded the $2.64 million project to Casella Construction, of Mendon, Vt., and spent months of planning and negotiations with abutters, particularly the owners of the railroad tracks that run parallel to the highway.

As part of an agreement with the railroad company, the transportation agency's repair plan included the construction of a soil nail wall to help stabilize the ground on the east side of the road to strengthen the embankment and prevent future landslides, in addition to a monitoring system to detect ground shifts during construction.

Around March 5, during construction, the monitoring system detected "excessive movement" in the ground, the Eagle Times reported, which NHDOT officials attributed in part to high groundwater and fluctuating temperatures. In response, the railroad rescinded its approval of the soil nail wall.

As part of the current, short-term repair, the embankment will be stabilized, and NH 12 will be rebuilt and paved so that the section of the roadway can reopen to two-way traffic.

"We do not believe it would be safe for public use of the road during construction and it would hinder the work," Mulcahey-Hampson explained in her statement. "However, at the request of the [Charlestown] police chief, [our department] and [the] contractor will provide access for emergency vehicles during off-hours of construction."

The long-term solution will be further investigated within the NHDOT's comprehensive Ten-Year Plan project, she added.

State transportation officials have already selected a consultant and have begun to study available alternatives.

Blocking access to NH 12 has proved to be a strain on communities throughout the area, including Claremont, Charlestown, Walpole, and Bellows Falls, Vt., the Eagle Times reported.

The Fall Mountain School District had to adjust its bus routes, pickups and schedules, including calculating additional time to commute students to and from school, according to the news source. Charlestown officials and residents also conveyed concerns about moving bus routes onto the community's other local roads, which they feared would create additional wear.

In addition, retailers in Charlestown have reported a significant loss in customers due to the drop-off in vehicle traffic through town as many commuters have had to change their driving routes.