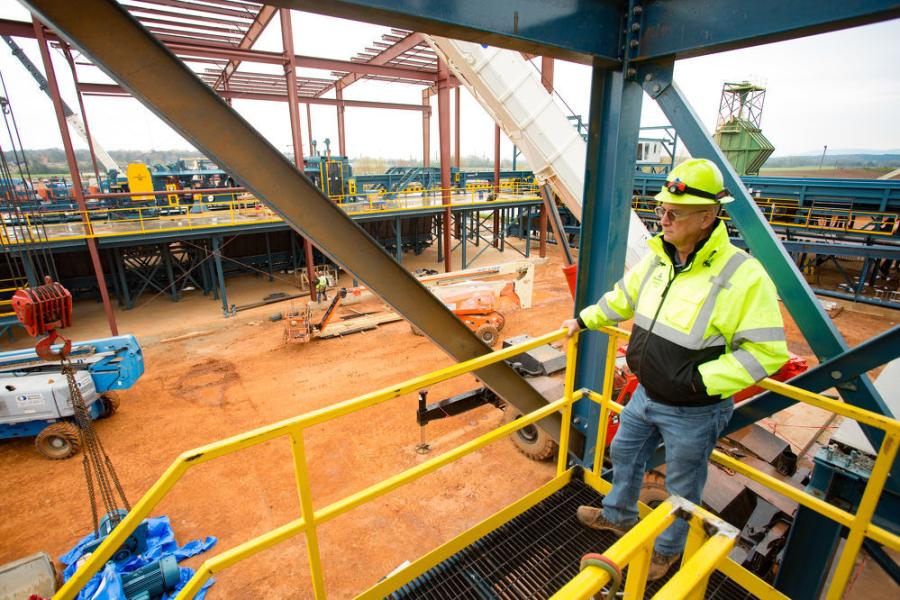 Rick Wilson, a G-P regional engineer, has worked full-time on the project for the last year.

After 10 years away, Georgia-Pacific is back in Talladega — a proud development for both the company and those who live in the small town renowned nationally for its rich auto-racing history.

Atlanta-based Georgia-Pacific, one of the world's largest paper and lumber manufacturers, is closing in on completing the construction of a new facility in Talladega, the eighth in Alabama to produce products for the company.

The approximately $115 million lumber plant is replacing a G-P plywood mill that first opened in 1975 before being closed in 2008.

Georgia-Pacific expects to directly employ more than 120 people at the new mill, with many more people to benefit from working with G-P's support businesses around the area.

The other seven facilities in Alabama account for approximately 2,300 employees and 8,600 indirect jobs, according to Rick Kimble, a spokesman for G-P.

The building effort was put on a relatively fast-track late last summer so that it could begin operating by the first week of August 2018.

The new state-of-the-art lumber processing facility will encompass several structures totaling roughly 300,000 sq. ft. They are designed, when fully operational in January, to accept approximately 200 truckloads of raw, Southern Yellow Pine logs every day. The result will be that the lumber mill will produce 300 million board ft. of lumber per year.

When finished, the lumber plant will be one of the largest such facilities in the Southeast.

Almost a year ago, Rick Wilson, a G-P regional engineer, arrived in Talladega to be the company's project manager. Once there, he started working full-time putting plans together and doing the preliminary engineering.

Last September, he oversaw the demolition of many of the derelict structures left from the old plant, a task that lasted until this past February.

“We sold a lot of the old equipment, moved 12 million pounds of scrap out of here and hauled off a few hundred truckloads of debris,” Wilson said. “The main building housing the old plywood plant was a little over 200,000 square feet. We saved two-thirds of that structure, some of the old office buildings and some peripheral stuff. The other third of that main building just wasn't suitable for the equipment we were planning to install.”

By October, new structural steel and machinery shipments began arriving in Talladega, allowing Wilson and his crews to begin some assembly of the lumber-processing equipment, out of the way of the earthmoving that had started.

The Bid Group, a Canadian construction company respected for its well-built manufacturing facilities for forestry products, is the prime contractor on the new G-P facility.

As expected, many local and regional companies are working as sub-contractors on the huge lumber plant construction. For instance, Wilson said Addison Grading in Conyers, Ga. and Waites Construction & Concrete in Talladega teamed up to do all the earthmoving and concrete work.

Dirt began moving in October when crews removed about 10,000 yd. of topsoil from the plant's generally flat acreage in an area where G-P wanted to build new kilns and lumber-storage sheds. That material was set aside to be replaced by about 75,000 yd. of fill to raise the ground up to the level of the rest of the mill.

“The weather was a huge problem in the fall trying to get our dirt work completed and working to keep 75,000 yards of fill dry when it would rain every other day,” Wilson said.

He added that another challenge is the project's “very aggressive construction schedule.”

“My thought coming into this job was 'Well, 90 percent of this job is turn-key because The Bid Group is building it and supplying the sawmill machinery, so my job will be relatively easy,' but trying to keep the other 10 percent going fast enough and keep out of their way has been an enjoyable challenge,” he said. 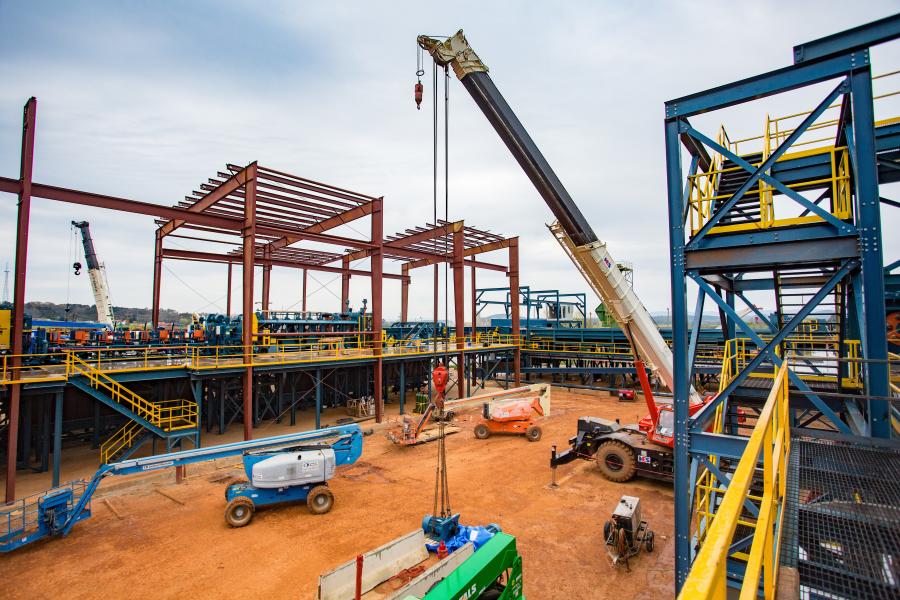 The builders received their air permit just before Christmas, which then allowed them to begin doing concrete work and erecting structures. Actual building began January 3 with crews installing rebar in the ground and putting forms up before the first concrete pour two days later, Wilson said.

By mid-Spring, 150 to 200 construction workers could be seen working on any given day.

“It is moving so fast that when I go out there it looks different each time,” he said in early May. “There is always a steady stream of concrete trucks coming in and steel being erected. Most of the operating machinery is in place, too, with some of it having already been powered up for testing purposes.”

The Georgia-Pacific site sits on approximately 90 acres, with 45 to 50 acres of it planned for active use. Some of the unused acreage is natural, but the company owns 170 acres in total, both at the plant and across the street. The additional land could be used, if needed, in the future, Wilson said.

The Talladega facility recently got another $15 million for additional expansion, with a fourth of that amount to go toward concrete work for log storage, as well as more scales to accommodate logging trucks.

“Even after we begin running production in August, we will not be 100 percent done with building the plant,” Wilson said. “For instance, our initial funding was for two kilns, so with our start-up kiln we are going to be running several months on one shift, then we will put the second shift on in the fall, meaning the second kiln does not have to be ready immediately.

“The new money that was approved also includes funding for a third lumber kiln, which I don't anticipate needing until early next year. We will start that construction in the fall.”

A variety of different-sized heavy equipment and cranes have been used to move materials, erect structures and lift heavy pieces of manufacturing equipment onto the new plant floor.

“If I were to go out there right now, I could probably count around 60 pieces of mobile equipment that construction crews are using, between earthmoving equipment and manlifts and cranes, extended boom forklifts, one 30,000-pound forklift to move heavy stuff. Obviously, the various subs all bring their pieces, but I would think that most are rented locally from places like United Rental.”

He added that unlike many wood plants that use cranes to handle raw logs, G-P prefers to use Cat 988 wheel loaders to do the job.

But, the intricacies of just how the lumber mill processes the seemingly endless stream of logs coming into the plant is key.

At multiple points through the process, starting with tree-length logs, each one will go through a laser scanner that develops a three-dimensional picture of the log to determine how best to cut it to get the most value from the lumber. It then automatically moves the log through a saw to cut it to a 20-ft. lumber length. Another 3-D scanner passes over it in a tenth of a second to allow a computer to again consider — in more than 100,000 different ways, Wilson said — what the best way is to get maximum value from the wood piece.

Even if the log is curved, the high-tech machinery can figure how to saw it properly so that at least part of the lumber can be laid flat and make for a good product.

After getting run through continuous kilns that warm and cool the logs to turn out a high-quality piece of lumber, the wood then passes into the planer mill to allow it to cool for a day before going into the planer itself to square up the boards to a finished surface.

“From there, we use probably the most sophisticated technology in the plant, which is the wood grader,” Wilson said. “It looks at each of the 150 boards running through it per minute with lasers and TV cameras to determine its grade and how to trim it. It can determine if, say, a brown discoloration on a board is part of the grain, or is rot, or is really a knot, and if it is the latter, it measures that knot quicker than in a blink of the eye.”

He continued by explaining that the grade of the board is based on the volume of the knot, not the surface area, and how close that knot is to the edge of the wood, which could impact the board's strength. The grader may decide to cut the board into different lengths to get the better value for G-P.

All of these valuations and determinations are made in mere milliseconds.

From there the lumber is sorted, packaged and hauled away to flatbed trucks or to the two rail lines that run by the plant site (a CFX line tracks on one side and a Norfolk-Southern on the other).