When a new land is planned at the iconic amusement park, crews have the task of constructing a themed-village with shops, restaurants rides and attractions. 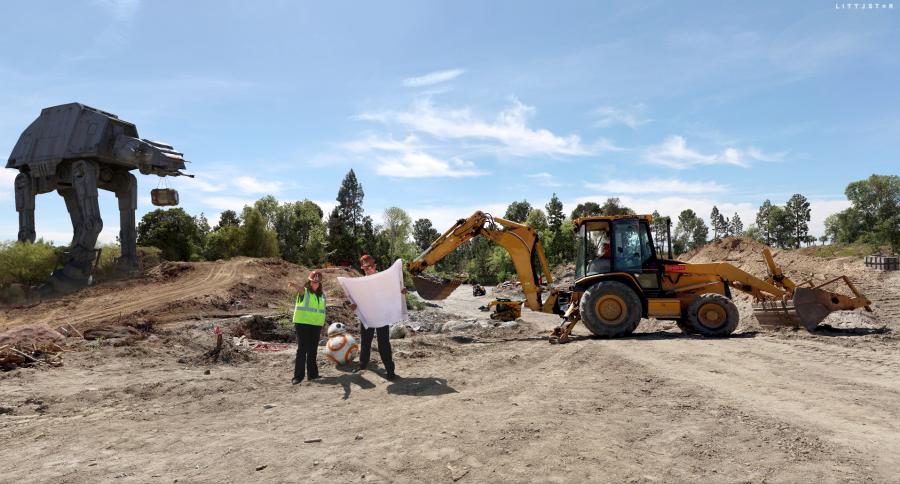 Disney Parks photo Disney’s newest land, now under construction, will transport visitors to a remote outpost planet that existed a long time ago in a galaxy far, far away.

When a new land is planned, crews have the task of constructing a themed-village with shops, restaurants rides and attractions. And they do it with a sense of fantasy, adventure and eye-catching realism that Disney is famous for.

Disney's newest land, now under construction, will transport visitors to a remote outpost planet that existed a long time ago in a galaxy far, far away. Yes, Star Wars Land is taking shape behind the scenes at Disneyland.

They take peeks of progress through knotholes in fences or spaces between the fence posts. Or they find high spots or rides like Big Thunder Railroad where they can glimpse some of the construction in the distance.

In locations near to where entry to the new land will be located, Disney has posted signs that offer a brief explanation of what's coming. One with an artist rendering of Star Wars Land reads, “On a remote outpost planet, new adventures await.”

Artist renderings of the new land show an enticing alien world trading post drawn up by creative artists and architects.

The new land is being constructed on 14 acres in the northwest corner of the park. Videos taken of Star Wars construction from atop a Disneyland parking garage and posted on YouTube show bulldozers, backhoes, numerous cranes, cement mixers, scrapers and hauling trucks busily at work on the massive project. Large amounts of rebar, electrical conduit, walls, posts for walls, tunnels and huge piles of dirt can be seen at the construction site.

Builders also are constructing a new route for the Disneyland Railroad with tracks crossing over one of the entrances to Star Wars Land.

Star Wars Land takes over some of Frontierland acreage including backstage areas, Big Thunder Ranch and part of Rivers of America.

Disney began construction of Star Wars Land on April 14 of this year. An opening date for the land has not been announced, but construction is expected to take several years to complete.

Not far away in Tomorrowland the Space Mountain and Star Tours rides have been overhauled to include special effects from the movie “Star Wars: The Force Awakens.”

Anticipation of the Star Wars Land is growing, but Disney is mostly mum on the project.

Disney has already pledged to spend at least $1 billion at its Anaheim resort area in return for a city promise not to tax park admission for at least 30 years.

Disney spent a reported $200 million on Radiator Springs Racers in Cars Land within California Adventure. It is thought that construction of Star Wars attractions will cost at least that much.

Disney paid George Lucas, creator of Star Wars, $4 billion in 2012 for the Star Wars franchise of which Star Wars Land is part.

According to a map of the Star Wars expansion provided by www.micechat.com, Star Wars Land will feature several major attractions including Battle Escape and Millennium Falcon. It will also have restaurants and shops.

The Micechat site, not associated with Walt Disney Co., reported that show buildings will be more than 150 ft. (46 m) tall with interiors that are sunk into the ground. Exteriors will be hidden inside themed rock cliffs and forested mountains.

The layout shows that the Battle Escape attraction will be larger than all of Disney's Toon Town.

Star Wars Land will have three entrances. One will be from Big Thunder Trail. Another will be near the border between Fantasyland and Frontierland.

The third will be from between the Hungry Bear Restaurant and Rivers of America.

Under the heading “Disney Rumor Update”, Micechat.com reported that Walt Disney Imagineering department wants to leapfrog the competition at Universal Studios, Hollywood, by creating an immersive Star Wars environment that is more akin to renaissance fair costume play than a traditional visit to a theme park land. “Shops and dining would be hyper-themed and operated like elaborate dinner theaters and living history museums,” the site reported.

It stated that the Millennium Falcon ride would involve moving between multiple pre-show theaters setting up the plot and what tasks must be completed once a passenger boards the Falcon and is launched into space. For those on the Battle Escape ride, the mission is to board, disembark and re-board vehicles on different levels of the massive ride building, while under attack by stormtroopers.

A pit dug deep into the ground at the Battle Escape site, is required for the elevator mechanism that will make the multi-level ride possible, Micechat.com reported. It added that Battle Escape will have 150 animatronic stormtroopers, plus additional animatronic Star Wars characters in various sizes.

By comparison, Pirates of the Caribbean has 75 animatronic figures.

Tower of Terror Converted to Guardians of the Galaxy Attraction

Meanwhile in Disney's California Adventure, Twilight Zone Tower of Terror will be converted into the Marvel Comics' Guardians of the Galaxy Mission: Breakout! The Tower of Terror is scheduled to close down in January.

Although Disney divulges little about how its fantasy-filled projects take shape, they do begin much like other projects where utilities are set up, roads and sidewalks are created and buildings erected. Heavy equipment brought in is much the same as for any other big project.

What is different is that in developing architectural drawings, architects must be highly creative and knowledgeable about Disney franchises including the Star Wars or Marvel Comics stories. And construction crews need to know special building techniques and how things like tall pinnacles of eroded rock will be fabricated in Star Wars land.

They also need to know how each ride works and how to build elaborate eye-catching sets. Final construction crews must include experts on assembling rides and animatronic characters.

The rides and shows of Star Wars Land are developed in a top secret Imagineering lab in Glendale, Calif.

Walt Disney Imagineering Research and Development Inc. is the research and development arm of Walt Disney Co. It is responsible for creation, design and construction of Disney theme parks and attractions worldwide.

The Imagineers are basically engineers or architects, but possess a broad range of skills and talents. Their job titles fall under the banner of Imagineering and include illustrators, architects, engineers, lighting designers, show writers and graphic designers.

Most work from the headquarters on Grand Central Creative Campus in Glendale, Calif., but some are deployed to satellite branches within the theme parks for long periods.

Imagineers are skilled at developing new or improved concepts for Disney attractions. For instance in developing the Disney California attraction called Soarin', Imagineers wanted guests to experience the sensation of flight.

However the Imagineers found they did not have an effective method of loading and unloading riders. The task was to be able to load multiple rows of people in a way that allowed for optimal viewing.

Imagineer Mark Sumner retrieved his old erector set from his attic and by tinkering with the set, designed a ride vehicle that would effectively simulate hang gliding. Using the method, three rows of passengers could be loaded at once.

The initial plan was to load passengers on three different levels. That was determined to be cost prohibitive.

First known as Soarin' Over California, the IMAX Dome HD laser-projected simulator ride opened in 2001. It took guests over several locations in California including Disneyland.

That was replaced in June with Soarin' Around the World.

And for Disney Imagineers, the work never stops. New Disney attractions are like First Order stormtroopers battling the Resistance in Star Wars — they just keep coming.

Once Disney's Star Wars Land opens, visitors can participate in that battle.