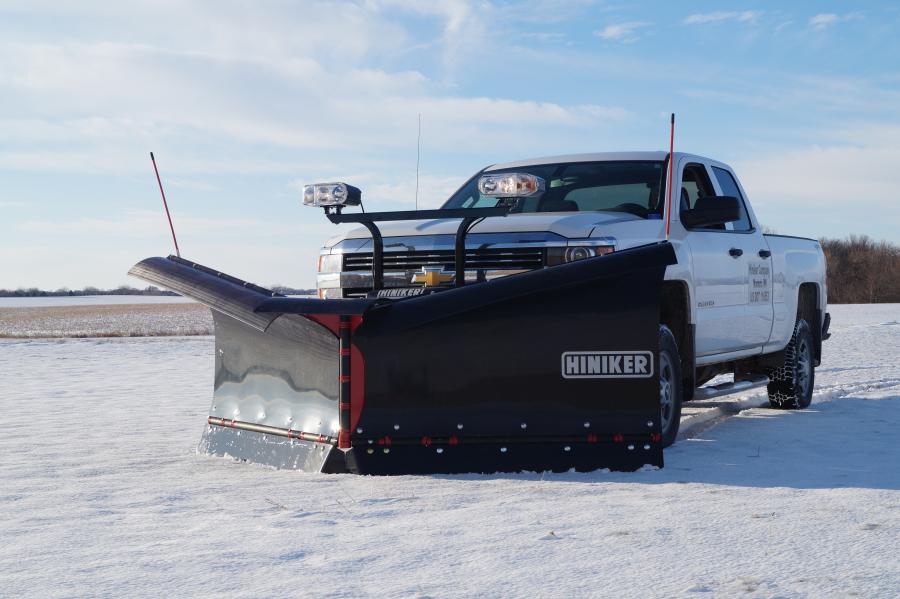 "We tested it last year and we're redesigning it so it's actually in build right now," shared Matt Morrison, director of sales and marketing.

Another is LED lights for all snowplows.

"Our bigger plows are going to come standard with the LED lights and then the smaller ones will still have a halogen option, but you can always purchase LED lights and a jumper cable and put those on there if you prefer." 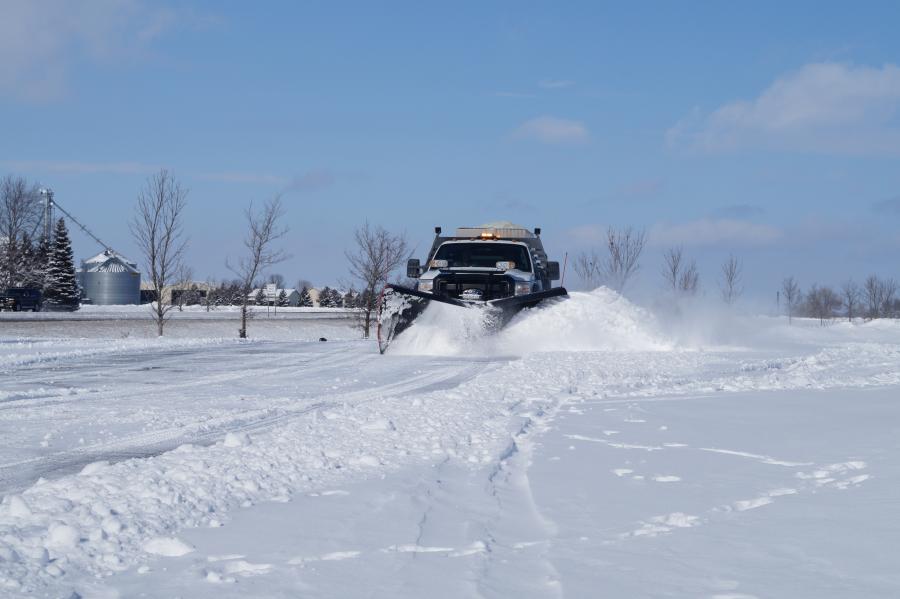 In 2018, Hiniker Company launched the VersaPlow, combining a box-style containment pusher, a backdrag containment box and a conventional snowplow into one, and the capability to hydraulically roll the end panels into any position from the cab. One of the company's unique offerings is the C-Plow, perfect for restricted spaces like tight parking areas, garage aprons, residential driveways and loading docks. With the push of a button, the heavy-duty conventional plow on the front of the truck converts into a backdrag plow for easy and quick snow removal.

Established in 1970 by the Hiniker family, the company began with agricultural equipment manufacturing and the product range evolved gradually from just tractor cabs to shredders, windrowers and cultivators. Over the years, the company diversified to water vending machines, under the Coster Engineering brand, and the design and manufacturing of snow and ice control equipment in 1995.

Today, the majority of business, about 60 percent, comes from manufacturing snowplows for trucks, skid loaders and small loaders, and salt and sand spreaders. Some of its big customers in the north central area include companies such as Truck Utilities and Toppers and Trailers Plus.

"We are an ag-based company, so we're used to building things very strong because that's what we've always been used to throughout the Midwest. That's how we got our name, is building high quality agricultural equipment that has really put up with a lot of abuse," said Morrison, who has been with the company for a year and a half and comes from a construction background. "We've transmitted that to the snow side of the business, building plows that are very durable, very simple. If you take a look at our controller compared to some of our competitors, they might have 11 buttons on them whereas we just have two buttons and a toggle switch."

The products at Hiniker Company have garnered a strong market presence in states such as Wisconsin, Iowa, North and South Dakota, Kansas and Nebraska. With a dealer network throughout the United States, the company is now eyeing the east coast and upper west coast for expansion. Operating on a slightly different model than most manufacturing competitors in this space, Hiniker Company sells its products direct to dealers, removing any distributors from the equation.

"We have a really close relationship with all our dealers, we are still a family-owned company and relatively small so we can keep the middleman out of it and pass on those profits to our dealers," said Morrison.

"This year, people are a little bit more hesitant due to the pandemic, the economic outlook, the possible political situation, to put their orders in. We changed our program last year so it's actually better for them," he said. 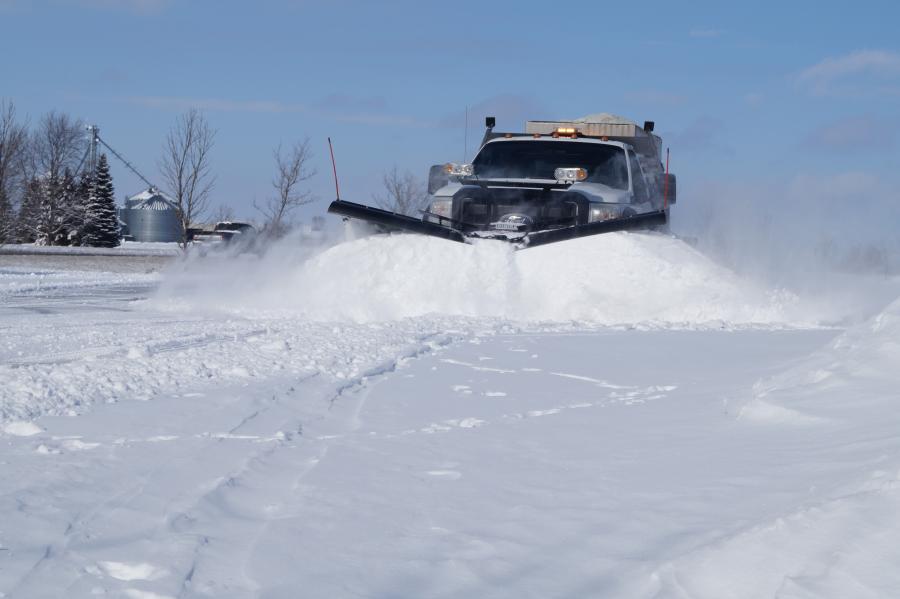 Like most manufacturers in this space, Hiniker Company previously had an early order program in which dealers ordered over a two-month period in the spring in order to avail discounts for the entire year. But in talking to its dealer network, it realized those discounts needed to be extended even when customers purchased in the winter as well.

"Now we've changed our program to have it be all year round and the discount is based on the amount of dollars spent. The discount structure goes up, the more money you spend, the bigger discount you get," he said.

Where sales were highest in the spring with the previous program, it now occurs when shipment happens late summer/early fall. Morrison expects orders coming in June through August, shipping in September and October and then a large order base in December "because people will know how much inventory they have left."

At Hiniker, orders for parts and other products in inventory ship in 24 hours or less, but anything that needs to be built, such as a mount or a plow, has a four-week lead time at the most.

Hiniker's agricultural, snow and water equipment are manufactured at the company's single location in Mankato, which is a 360,000-sq.-ft. manufacturing facility with 80 employees. With new technology and machines now at their disposal, Morrison shared that the workforce has evolved from a lot more employees working over multiple shifts to maximizing efficiencies with a reduced workforce and just one shift.

The company has its own electronics department and a dedicated R&D department, led by the agricultural and snow portions of the business. Products take at least a year or two to introduce to the market considering the process involved to design, build, test in different locations across the country to get feedback, improvise, retest and then make available for sale. One of the major factors always taken into consideration is competitive pricing.

"We're excited for some of these new products that are coming up," said Morrison. "One of my jobs is to go around the country, visit with all of our customers, find out what they'd like to see in the future and bring that to reality. I am included in all our engineering meetings on a weekly basis so I bring what the customers tell me to the engineering table and the president of our company to see if it's something that we can make happen."

In the works is a larger 12-ft. Versaplow and available now is a 10-ft. V-plow for bigger 4500/5500 trucks. And while the latter has its demand, it's Hiniker's straight blade plow that's the most popular equipment given "it's very affordable for the common contractor that's going to be clearing snow."

Hiniker provides technical training for staff once a year onsite in Mankato, usually in the fall when people are starting to get their plows set up. And depending on requests, regional trainings are held at dealers' locations for service technicians covering maintenance, installation and any other frequently asked questions. Online training in the form of a DVD is available but this year, virtual trainings are planned to enable live Q&A while in-person trainings are curtailed due to the pandemic. For customers, Hiniker has YouTube videos on the website covering everything from changing snowplow headlight bulbs to replacing the joystick switch, and other common technical issues. Warranties are provided on more of a case by case, product by product basis.

As for what the future holds at Hiniker Company, Morrison is enthusiastic, "It's really positive. Right now, the company is under new management. We are getting into using technology, focusing on digital marketing, and trying to help customers with online ordering. We increased the company sales by quite a bit last year so hoping that continues upward." CEG