New Shelling, Storage Plant to Be Boon for Atmore's Economy 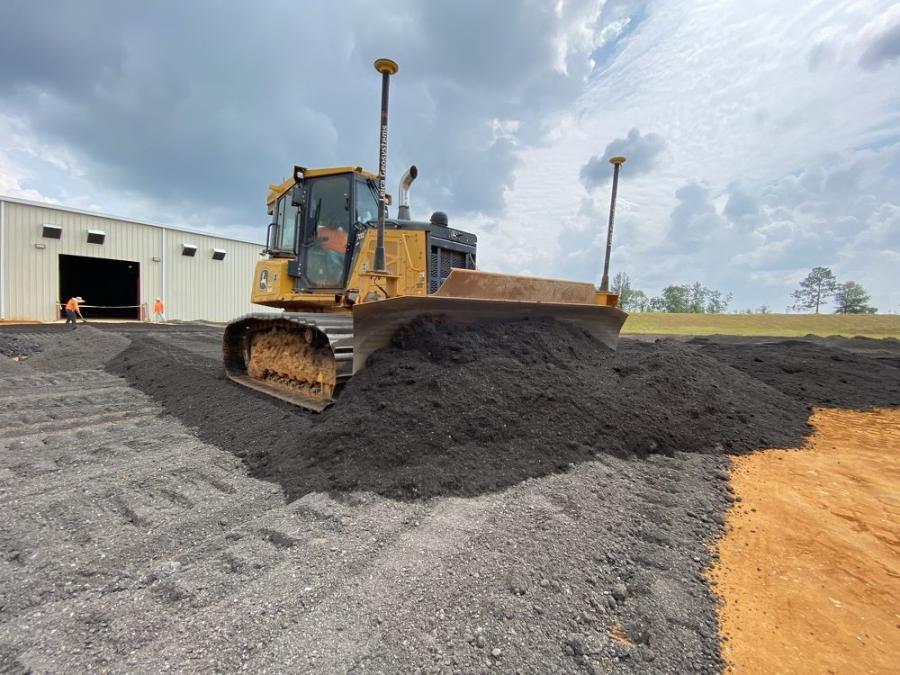 Much like the tiny seedlings that rise from the soil, an $87 million peanut shelling and storage plant is emerging in Atmore, Ala.

The facility, encompassing more than 400,000 sq. ft., is scheduled to begin operations in December 2021 and should be fully complete by January 2022.

"There will be somewhere around 350 jobs, direct and indirect, and that will have a big impact on Atmore's economy," said Atmore Mayor Jim Staff. "This will create a new and different city. I foresee new business, school programs, just a good difference to our community." 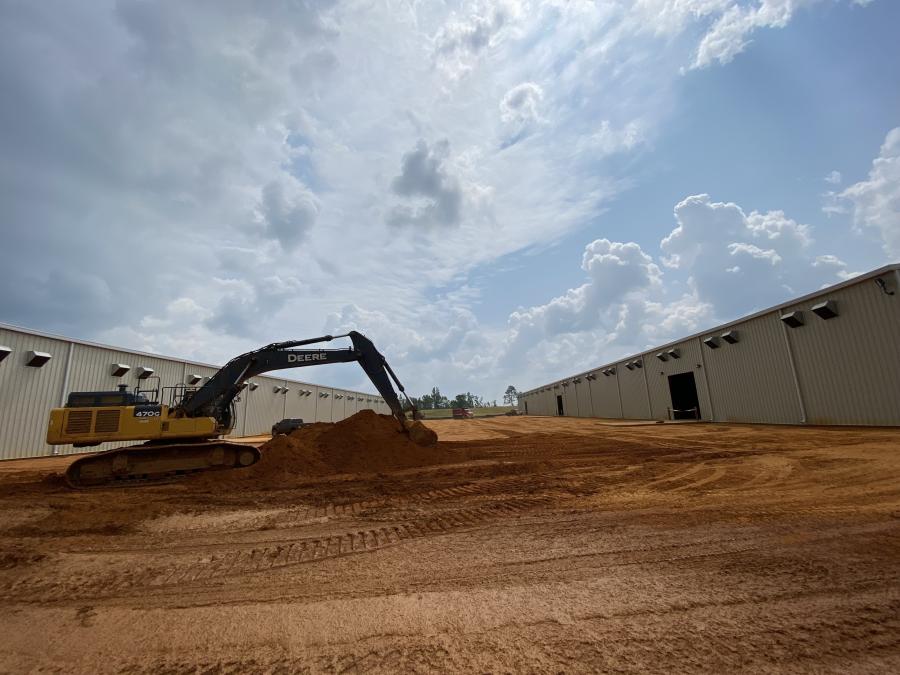 The Escambia County plant, located on more than 60 acres, will bring additional jobs to the area during peak production times. Staff also noted that the farmers, as part owner of the plant, will get 20 percent more for their crop.

"This will be spent in our community," Staff said. "They will be able to have better equipment, farm smarter and be more diverse."

"Without this $13 million, the 100-plus farmers who own Coastal Growers would not be able to raise the $20 million necessary to help build the plant," said Staff. "This plant is located in Atmore's industrial park to the west of town and next to the CSX Railroad, and a rail spur that was necessary for this plant to operate could be installed with little cost.

"This park had all the utilities necessary to operate any size plant. It is shovel ready for more."

Coastal Growers LLC held an official groundbreaking ceremony in March 2021. Directed by a board, Coastal Growers is owned by a cooperative of farm families. Most, but not all, are based in Alabama.

"Coastal Growers is proving that Alabama's economy remains strong and is bouncing back from what has been a hard year," Gov. Kay Ivey said to reporters. "This partnership is a win-win for Atmore, the surrounding communities and the state of Alabama."

The Alabama Farmers Federation (AFF) and the Alabama Peanut Producers Association (APPA) both played a key role in the project's development. According to the APPA's news release, the cooperative shelling plant model gives growers the opportunity to collectively sell on the shelled goods market, as opposed to the traditional farmers stock market.

Work on the highly anticipated project is continuing at a steady pace.

With more than seven decades of experience overseeing jobs from Texas to Florida, Dothan-based Hollis & Spann serves as the general contractor. According to Hollis & Spann President Glenn Spivey, the main obstacle for crews at the site involved the top 3 to 4 ft. of soil that had to be replaced over the entire area.

"The site work was started in the fall of 2020, and wet weather was challenging in moving this much dirt," said Spivey. "Coastal purchased additional land to serve as a borrow pit for the needed material, and we designed berms to allow for onsite storage of the unsuitable soils. The winter weather was challenging for the site work portion of the project, and this June and July have been near record rainfall that has slowed some of the concrete work and paving."

The plant equipment (by LMC) install takes seven months and is 75 percent complete. The building is erected over the equipment. Site paving is being installed. Cold storage is under construction. The office and lab have been completed, and are being used by the Coastal team. Rail construction will begin soon.

Spivey said that the storage warehouses are nearing completion and will receive farmers' stock peanuts in September. There will be 60,000 tons of storage capacity. Equipment start-up and commissioning will begin in November.

As for the chief concerns when building a peanut shelling facility, said Spivey, "The plant will run year-round, but peanuts are harvested in the fall, and the facility must be able to receive peanuts in September."

Subcontractor Triptek Construction LLC, a full-service construction company, has been responsible for the mass grading of the site, along with base material, asphalt paving, concrete paving and stone surfacing around the warehouses, as well as site utilities. 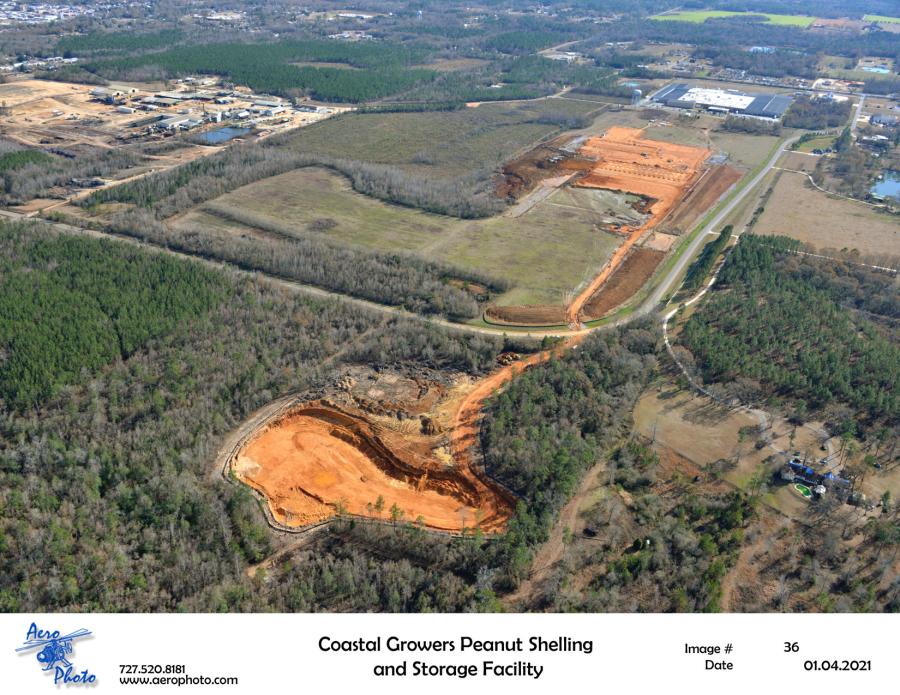 "We also constructed all of the support buildings outside the plant and warehouses, such as the main office, grading office, employee restroom/break room and ticket building," said Triptek owner Miles Smith. "We started construction in August of last year, and will be on site until around February of 2022."

Performing the mass grading of the site included over excavation to stabilize the site.

The property was previously used for row crops, so the crew had to remove all the unsuitable material and then backfill with a more select material.

"We were able to open an onsite borrow pit to harvest the select material, and we bermed the remaining spoil material," said Smith. "The soil berms will be planted with pine trees at completion.

Smith said the weather has been among the chief concerns for workers.

"This year's rain events have been an ongoing challenge, along with the heat."

Smith also said that while the hours may be long, it's very rewarding to be a part of building a plant that will serve so many, while also having a positive impact on the local economy.

"It feels great to be a part of something that is owned by farmers. I grew up farming with my dad and uncle, so it means a lot to me." CEG