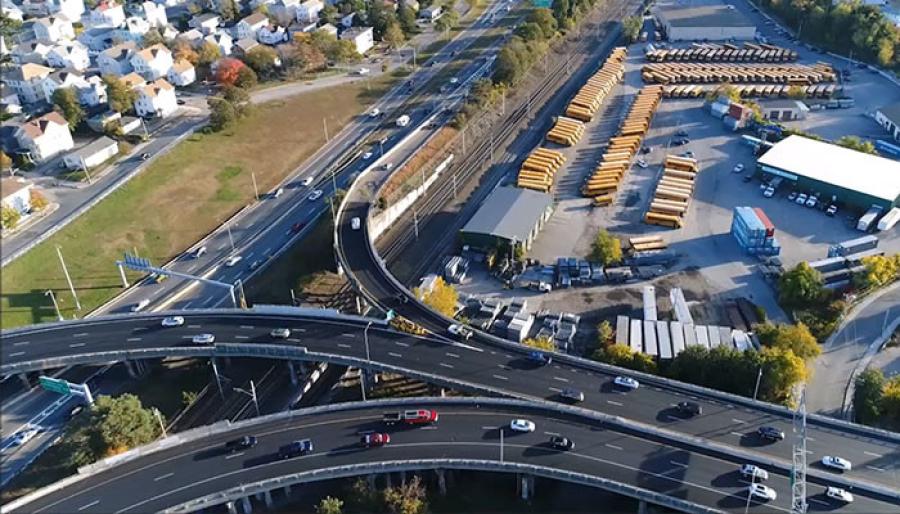 The Rhode Island Department of Transportation (RIDOT) announced a series of traffic pattern changes it will implement as work advances on the reconstruction of the $410 million Route 6/10 Interchange.

The traffic changes are all temporary, but some will be in place for several months. RIDOT has worked with the design-build contractor to sequence each step of construction to minimize the impact to traffic locally, on the highway interchange, and in the surrounding neighborhoods.

The first traffic pattern changes began on Nov. 9. They include lane shifts to move traffic away from the center of the interchange, freeing up a large work zone for construction of new highway and bridge segments. For more information, visit ridot.net/610.

The restrictions scheduled for this fall are as follows:

Nov. 9: The Broadway off-ramp, accessible to traffic traveling on Route 6 East to the 6/10 Connector Inbound toward Providence, will be closed for approximately 24 months. A detour using the Hartford Avenue exit will take traffic through Olneyville Square.

Nov. 9: When traffic volumes are lightest during the evening and overnight hours, RIDOT will open a temporary section of Route 10 North that has been built next to the current highway alignment. All traffic will shift to the right onto this new roadway, and will use it to access a new, temporary exit to Westminster Street. No lanes will be closed. This will be in place for about 24 months.

Nov. 10: RIDOT introduced a minor lane shift to the right for traffic on the ramp from the 6/10 Connector outbound to Route 6 West. No lanes will be closed. This will be in place for about 12 months.

Week of Nov. 11: RIDOT shifts Route 6 East traffic to the left, just after the Hartford Avenue exit. This will put both eastbound and westbound Route 6 traffic on the westbound portion of the highway for bridge replacement over Hartford Avenue and Plainfield Street. The shoulders will be restricted in this area, and lanes will be narrowed for about 12 months. No lanes will be closed.

The 6/10 Interchange and nearby city streets of Westminster Street, Broadway and the road network in and around Olneyville Square are subject to daily traffic congestion and delays. Based on an analysis of traffic volumes and travel times given these traffic pattern changes, RIDOT estimates travel times through the Olneyville area to increase by a minimum of 3 to 5 minutes during peak travel times. Traffic on both Route 6 and Route 10 highway segments can expect an increase of a minimum of 2 to 6 minutes during the morning and evening rush hours. These times are estimates and can vary greatly due to adverse weather and traffic conditions.

The 6/10 Interchange project is scheduled for completion in fall of 2023. Upon completion RIDOT will have replaced seven structurally deficient bridges.

RIDOT specified a design-build contract to save time as it allows construction and design to proceed simultaneously. This saves time and money.