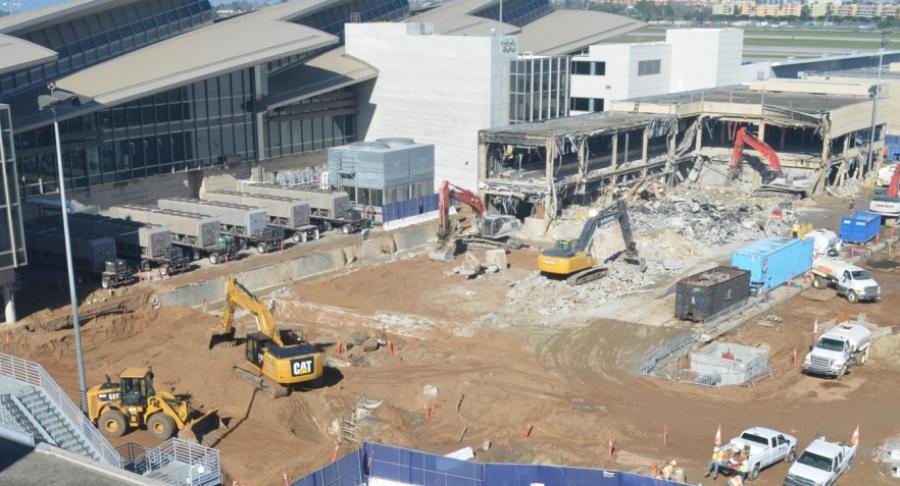 Contractors will be back in full swing on a $14 billion modernization in which more than $3 million is spent each day on more than two dozen major construction projects.

With a new year, it's time to look ahead at what will be a busy 2017 in and near Los Angeles International Airport. After the construction moratorium ended on Jan. 4, contractors were back in full swing on a $14 billion modernization in which more than $3 million is spent each day on more than two dozen major construction projects. The improvements will result in a modern airport that significantly enhances the overall guest experience for the modern traveler.

• Portions of the drop-off lane on the upper/departures level in front of Terminal 1 are closed until March 2017 as part of Southwest Airlines' renovation project. The entire drop-off lane is closed weeknights from 10 p.m. to 4 a.m. while a canopy is constructed over the sidewalk.

• Installation of a closed-circuit television system will close a portion of the drop-off lane nightly at three taxi stands in the area of Terminals 2 and 3.

• Redevelopment of Terminal 7 has closed a 135-ft. (41 m) section of the passenger drop-off area on the upper/departures level, which will remain in place through April 2017.

• Lanes on Center Way and Theme Way may be restricted overnight to install electrical lines for Delta's temporary construction trailer complex in the former parking lot across from Terminal 6.

• Eastbound Century Boulevard is reduced from three lanes to one lane between La Cienega Boulevard and Felton Lane, including under the Interstate 405 overpass, as part of Inglewood's Century Boulevard Mobility Improvements Project, potentially impacting traffic leaving LAX for northbound I-405. The work will continue into March 2017.

Terminal 1: Phase 2 of Southwest Airlines' $509-million Terminal 1 Renovation Project continues in the eastern part of the terminal, including the former check-in lobby, with barricades in place.

The pedestrian bridge connecting parking structure 1 and the terminal is closed, with signs placed to direct passengers. The restrooms on the ticketing level have been temporarily replaced by unisex restrooms on the western side of the lobby. Passengers may also use restrooms located on the lower/arrivals level or in the terminal beyond passenger security screening.

A new, covered skycap baggage check-in area opened on the west side of the terminal. Gate 17B will reopen in late January, at which time Gate 16A will close for renovations. Gates 16B, 18A and 18B are also closed.

Coffee Bean and Tea Leaf (near Gate 13) and Nektar Juice Bar (in the waiting area near Gate 14A) have opened. Work continues in the food court area. Westfield is phasing in new concessions, with a total of 24 to be installed through 2017.

Terminal 2: Remodeling work is almost complete in the ticketing lobby as Los Angeles World Airports wraps up its $332-million Terminal 2 Modernization Project. An electrical upgrade and tile work are still in progress. Gate 27 will close for renovations in January.

Terminal 3: Gate 31B will close for renovations in January.

Terminal 4: American Airlines' Admirals Club is being renovated, with expected completion this summer.

Renovation of the Food Court continues through January, while refurbishment in other areas of the terminal, including the ticketing lobby, baggage claim and the waiting areas at the gates, will continue through March. A new Automated Screening Lane (ASL) is scheduled to be installed at the Security Screening Check Point in the first quarter of 2017 to reduce wait times.

Terminal 5: American Airlines is scheduled to relocate its four gates now in Terminal 6 to Terminal 5 at the end of January. Terminal 5 is adjacent to the American hub in Terminal 4, improving operations and the customer experience.

Terminal 6: Gates 68 and 69B will close for renovations in January.

Each automated lane is processing 25 to 35 percent more passengers hourly than a standard lane. The checkpoint at the bridge level is permanently closed. The bridge from parking structure 7 is closed through May 2017 for elevator demolition and construction — access to the parking structure is available on the lower/arrivals level.

Two new elevators are being constructed near the bridge, and expected to open in May. Gates 72 and 80 are closed for renovations, while Gate 75A will close in January. A new women's restroom has opened near Gate 71B. A new water bottle filling station has been installed along with the water fountain near this location.

Work continues on a new baggage carousel 1, with temporary walls in place. The United Baggage Service office is in a temporary location near the new restrooms on the west end of the baggage claim area, and must be accessed from the street. Terminals 7 and 8 can be reached using East Way, a short-cut between the northside and southside terminals that eliminates the need to travel around the entire Central Terminal Area.

• As part of the Terminal 1 Renovation Project, portions of the sidewalk on the upper/departures level will be closed through 2017 with pedestrians routed around barricades.

• Upgrades to the elevators in the east tower at Parking Structure 1 will close a portion of the sidewalk on the lower/arrivals level through February 2017.

• Portions of the sidewalk at Terminals 2 and 3 on the lower/arrivals level are restricted overnight while electrical conduit is installed.

• Work to install security bollards on the upper/departures level will close portions of the sidewalk in front of Terminals 3, 5 and 6. An ADA-compliant path of travel will be maintained at all times.

• Landscaping around parking structures 3 and 4 may result in sidewalk restrictions. Signs will be posted when necessary.

• A blast fence is being installed at the heliport on top of parking structure 4, reducing the number of parking stalls on Levels 4 and 5, and occasionally requiring closure of the ramp between Levels 3 and 4. The work will continue through February, from 5 a.m. to 2 p.m. daily.

• The two elevators in the east tower of parking structure 4 are out of service through April, while upgrades are performed. Two other pairs of elevators remain in service.

Note that all dates provided in this notice are subject to change.