New York Wheel Due to Spin in Early 2018

The new landmark is expected to attract more than 3.5 million visitors each year. 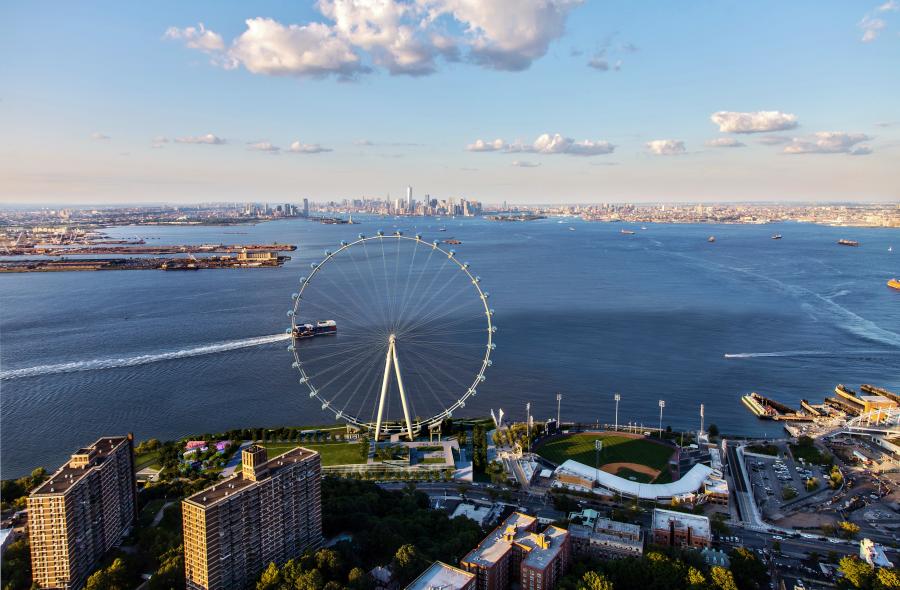 New York Wheel LLC photo. The wheel will include a total of 36 pods, with each equipped to hold 40 people for a 38-minute ride.

A new landmark attraction continues to rise on the New York Harbor in St. George, about a three-minute walk from the Staten Island Ferry Terminal. The New York Wheel will be either the tallest or second tallest observation wheel in the world when it opens (depending on when the wheel in Dubai opens). It is expected to attract more than 3.5 million visitors each year.

The project began in April 2015, with construction expected to wrap at the end of 2017. The full dollar amount is approximately $580 million, including the wheel, terminal building, parking garage and surround areas.

The wheel will include a total of 36 pods, with each equipped to hold 40 people for a 38-minute ride. The pods will be enclosed and climate controlled. There will be several fine dining pods, a bar, and customizable pods for special events. The wheel promises world-class views of the New York Harbor, Statue of Liberty, Verrazano Bridge and New York City skyline.

“Among the challenges of the project is the uniqueness and scale of the project itself as it is a very big, iconic structure,” said Rich Marin, New York Wheel CEO. “The biggest challenge has been the design of the actual structure itself, the approval process, financing and then actually construction of something so big that it pushes the limits of physics and metallurgy.”

Sourcing the materials has also proven to be a challenging task.

“A unique aspect of the project is that two contractors are involved on the same site,” Marin said. “We have one contractor that's global in its expertise around the wheel, heavy lifting and erection, and one that is very well-versed in local contracting practice. The blend is important — whenever you have two major contractors on one site, there is a significant amount of logistical coordination that has to take place.”

Marin noted that unlike the London Eye, which was raised from a flat to a vertical position, the New York Wheel will be assembled in place from the bottom up without the truss structure rim that the London Eye has. This will give it a more delicate look

More than 400 trucks from Gilbane Building Company were on the site to pour approximately 4,000 cu. yds. (3,058 cu m) of concrete into the 150-by-30-ft. (45.Stru72 by 9.14 m) foundation. Crews also dropped a time capsule into the final pour of concrete. Instructions are for the capsule to remain buried in the cement until 2646, which is 630 years from now — one year for each foot of the wheel's height.

Included in the capsule were:

• A copy of the Staten Island Advance with a story about the time capsule for the New York Wheel.

• A New York Wheel shaped USB drive containing a video of how the wheel was built.

• A jar of honey (which never decomposes) produced on site at the URBY residential/commercial complex in Stapleton as part of the North Shore renaissance.

• A $10,000 gift certificate from Empire Outlets, New York City's first outlet center being built in conjunction with the wheel.

• A pin from Robbin's Reef Lighthouse. The only working lighthouse in New York Harbor. It stands one mile off shore from the site of the New York Wheel.

• A Ferry Rider's Guide; Staten Island ferryboats are expected to sail many of the patrons to the wheel.

• A miniature hard hat from Gilbane, the company overseeing the construction of the wheel.

• A small plastic Danny the Dolphin mascot representing the College of Staten Island.

• A brochure and pen from the Staten Island Museum.

• A Destination St. George brochure celebrating the neighborhood where the wheel is located.

• A letter from James Oddo, Staten Island Borough president expressing his desire for world peace and other aspirations for future generations of Staten Islanders.

The New York Wheel will be equipped with $7 million of LED lighting.

A green roof area will include 5 acres of publically-accessible grass space equipped to accommodate events of up to 5,000 people; including concerts, festivals, weddings and other events. It also will include a state-of-the-art children's playground.

The terminal building will be a secondary attraction, including casual dining, wheel merchandise, event space and a sustainability exhibit.

The wheel's foundation includes 96 caissons drilled down about 100 ft. (30.5 m) into bedrock and socketed to create lateral and uplift stability. The caisson's external sleeves are 67 in. (170 cm) in diameter, and the inner sleeves are about 35 in. (89 cm) in diameter.

The New York Wheel project was proposed by New York Wheel LLC in response to the New York City Economic Development Corp's request for bids for projects that would increase economic growth, boost tourism and create jobs on Staten Island.