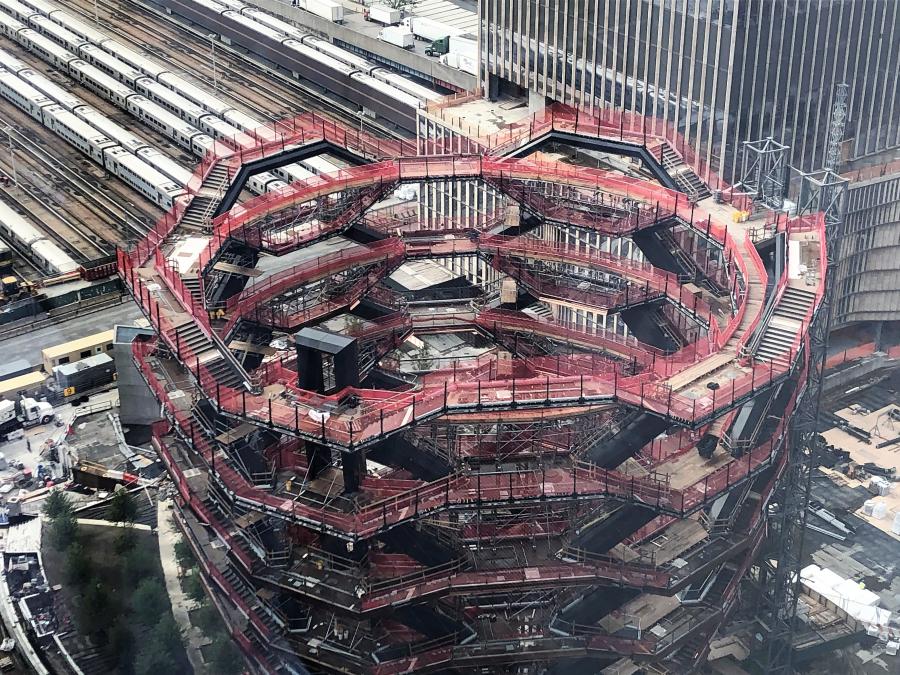 People lined up March 15 to climb the 2,500 steps to the top of a massive, honeycomb-shaped sculpture called Vessel — the visual centerpiece of a complex of high-rises on Manhattan’s West Side with pricey commercial and residential space, plus about 100 shops and restaurants.

People lined up March 15 to climb the 2,500 steps to the top of a massive, honeycomb-shaped sculpture called Vessel — the visual centerpiece of a complex of high-rises on Manhattan's West Side with pricey commercial and residential space, plus about 100 shops and restaurants.

CNN will be a tenant at Hudson Yards along with its parent company, WarnerMedia. Other well-known corporate tenants include the BlackRock money manager, L'Oreal USA, Equinox and Coach.

Hudson Yards bills itself "the cultural center of Manhattan's New West Side," and on its first day, the culture came in the form of familiar brands at the five-floor retail mall — from Dior, Fendi and Neiman Marcus to Uniqlo, Banana Republic and H&M. New employees being trained inside the shops got last-minute tips before customers arrived at noon. A hungry crowd packed the affordable Shake Shack, with a line winding out the door.

The powerhouse figure at the opening was developer Stephen Ross, the CEO of Related Cos. that partnered with Oxford Properties Group to build Hudson Yards, where the price of apartments ranges from about $3 million to $32 million.

"Today, we created a dynamic hub of creativity and innovation," Ross told a standing-room only crowd of hundreds gathered under Vessel. "Today, once again, we showed that New York will always be the greatest city in the world."

Another prominent guest was Gary LaBarbera, president of the Building and Construction Trades Council of Greater New York that finally settled its bitter labor dispute with Related over use of union and non-union workers; the two sides are now collaborating.

Only half of the 28-acre community by the Hudson River is completed, including the highest observation deck in the Western Hemisphere atop a 100-story building, and The Shed, a 200,000-square-foot art center with a telescoping outer shell.

The rest of Hudson Yards is to be constructed by 2025.

The massive Hudson Yards project is made up of the following:

One portion of the project that is still in the works is the Hudson Yards observation deck, "Edge," set to be complete in 2020. When finished, the 1,100-ft.-tall structure will be the fifth tallest in the world. A glass floor will provide visitors with a unique view of the NYC skyline. To build the deck, crews will use around 15 pieces of steel and glass weighing 35,000 and 102,000 lbs. each, which were assembeled in Italy before being brought onsite.

(CEG contributed to this article.)