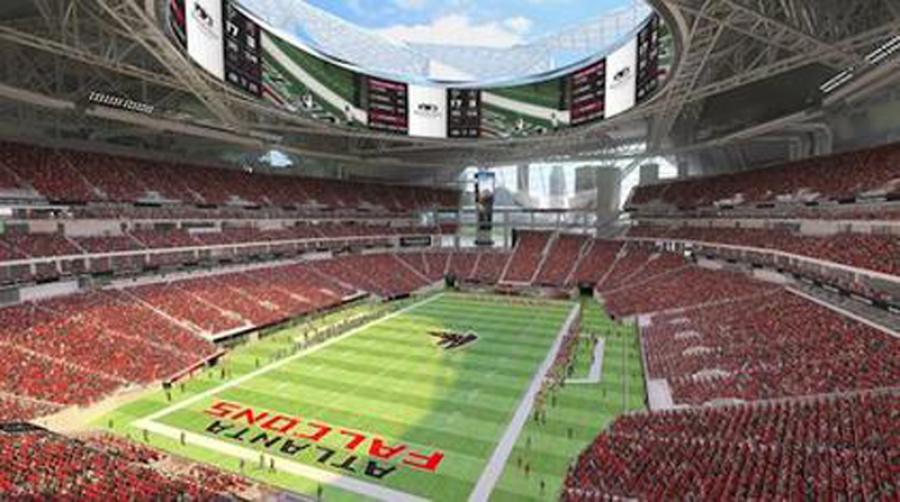 An artist's conception shows the interior of the stadium. Image courtesy of the Atlanta Falcons.

The Atlanta Falcons marked a milestone Wednesday in the construction of Mercedes-Benz Stadium as one of the final steel beams for the fixed portion of the roof was lifted into position before a gathering of media members.

Hundreds of construction workers signed the beam before it was hoisted by crane and bolted into place almost 300 feet above what will be the Falcons' playing field.

The Falcons held the ceremony to celebrate the installation a few days earlier of the 99th — and last — major structural steel truss for the fixed roof.

“It has been a long time coming, but we're glad we're there,” Mike Egan, senior vice president of Falcons parent company AMB Group, said of the construction milestone.

“We're excited about the progress,” said Egan, whose responsibilities include oversight of the stadium project.

here is much work yet to be done before the roof is finished, particularly the installation of the retractable portion, which will be a signature feature of the $1.5 billion stadium.

At this point, 17,000 tons — 34 million pounds — of steel have been erected for the roof, according to project manager Darden & Company. Another 3,500 tons of steel will be added as the retractable portion is put in place, starting late this year and continuing next year.

The retractable roof will consist of eight petals, each to be installed in four pieces. The roof is designed to open and close in seven to eight minutes with what architects have described as a “camera lens-like” effect. A 58-foot-tall video board will hang from the circumference of the roof opening, encircling the field.

The stadium was originally scheduled for completion on March 1, 2017, but that was pushed back early this year to June 1, 2017, and more recently to a looser target of “summer” 2017. That remains in time for the start of the Falcons season, but the first three to five months of the Atlanta United soccer team's inaugural season will be played at Georgia Tech's Bobby Dodd Stadium while the new stadium is completed.

“We're working daytime and nighttime and Saturdays and Sundays,” Bob Evans, project superintendent for general contractor Holder Hunt Russell Moody, said. “This is one unique structure, one of a kind, not something you do every day.”

Some 1,800 workers were on site Wednesday, he said.

Asked about a deadline date to finish the job, Evans said: “When Falcons season starts (next year), be ready for them to play.”