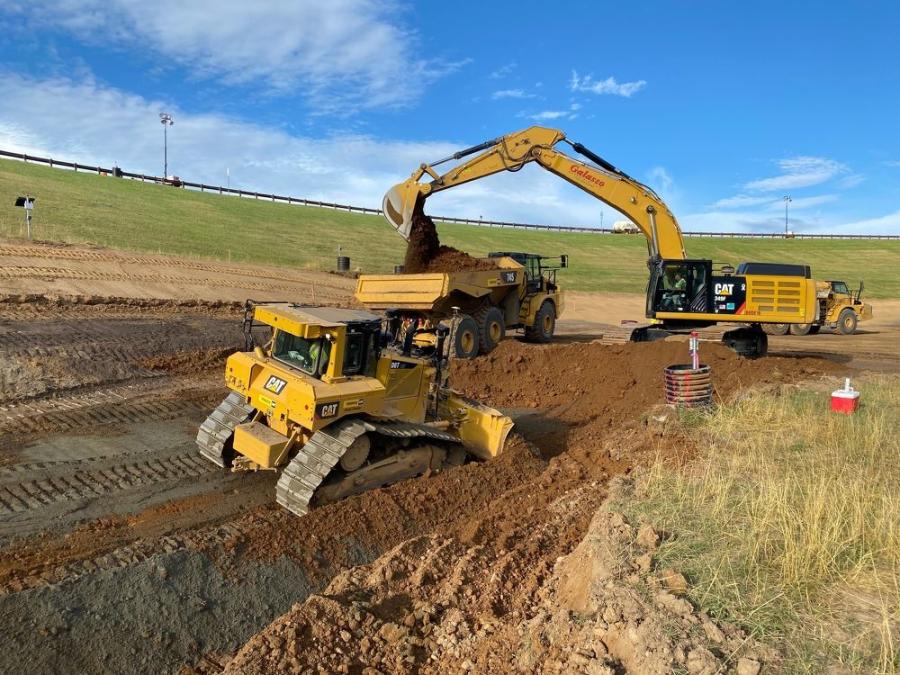 In the township of Clinton, N.J., site preparation is under way on the $75 million Round Valley Reservoir project.

The work calls for massive excavation and multiple trucks carrying an average of 26 tons of filler material. The improvements are expected to extend the reservoir's operating life and increase durability. 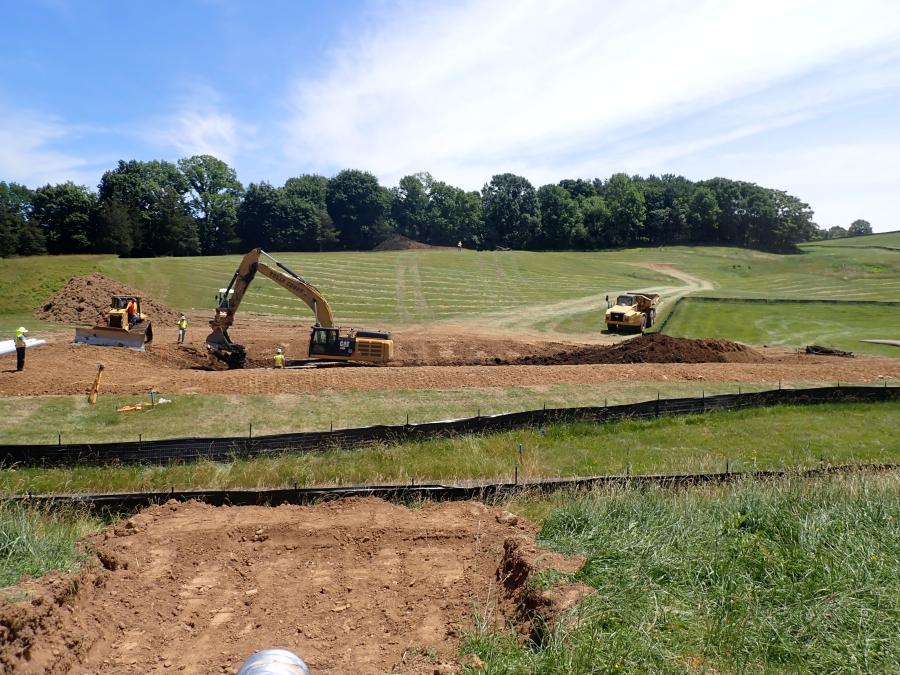 "The reservoir was constructed in the early 1960s and has been in operation since that time," said Marc Brooks, executive director, New Jersey Water Supply Authority (NJWSA), which is overseeing the endeavor. "Maintenance of its structures is necessary to ensure that the reservoir can continue to safely and reliably maintain water supply into the foreseeable future.

"While a number of maintenance projects have occurred at the reservoir since original construction, until now there has been no large, wholesale effort at preserving the integrity of the reservoir's structures and operational ability," said Brooks. "Improvements to the dam embankments will improve their resiliency and improvements to the other dam structures and will update the buildings and equipment necessary for managing the water supply."

The Round Valley Reservoir is the largest in the state of New Jersey by volume, and two of the dams are the second and third highest in the state. Brooks said it's crucial to bring the reservoir structures into the 21st-century.

"Design standards and safety features of earthen dams have evolved," Brooks said. "The reservoir was built to the standards of the day, but some features that are now considered standard were not common in 1960. The Authority is being proactive by studying the construction features in place now and comparing them to more modern dam engineering approaches.

"For example, the chimney drains that are being retrofitted are common features of modern earthen dams. These drains help to filter and move water that seeps into the dams away from them quickly and safely by utilizing layers of material like gravel and sand within the embankments. Round Valley was constructed with different types of drainage systems, which are now being upgraded to the modern standards to enhance dam safety."

NJWSA chose a phased approach to rehabilitating the embankments, rather than doing them concurrently, in large part to increase dam safety during construction. 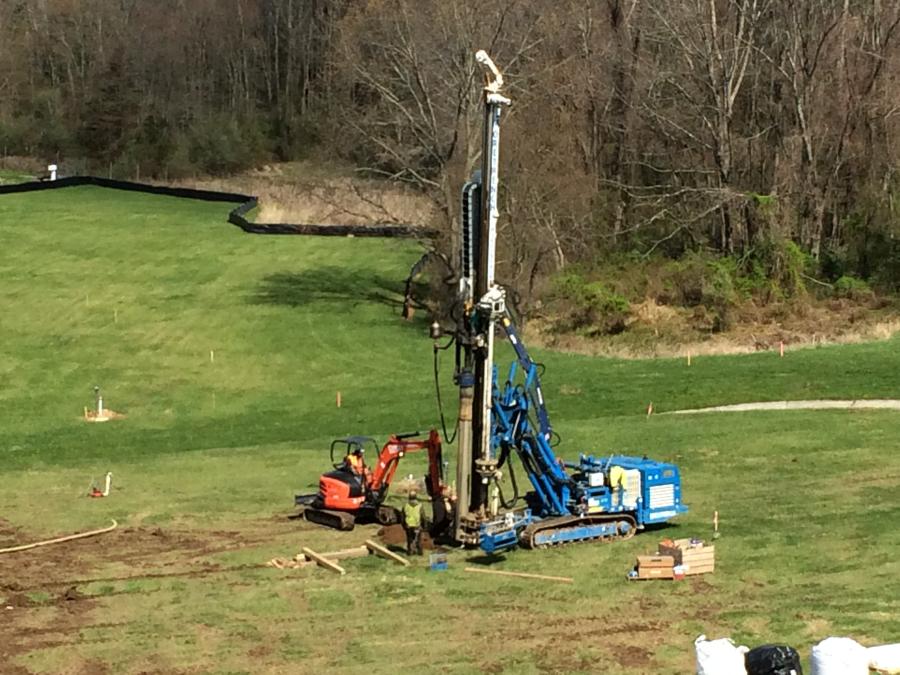 Ancillary work is occurring simultaneously, with construction on the embankments and includes renovations to the towers of the North and South Dams, the rehabilitation of sluice gates or valves that control the flow of water in and out of the reservoir, and the replacement and grouting of piping located near the South Dam."

NJWSA called upon Schnabel Engineering to provide construction management services. The owner, contractor and engineer have been maintaining timelines, in part, by convening weekly construction meetings, to make certain the major undertaking goes according to plan. Brooks explained that many events must be coordinated to allow safe rehabilitation of the embankments. 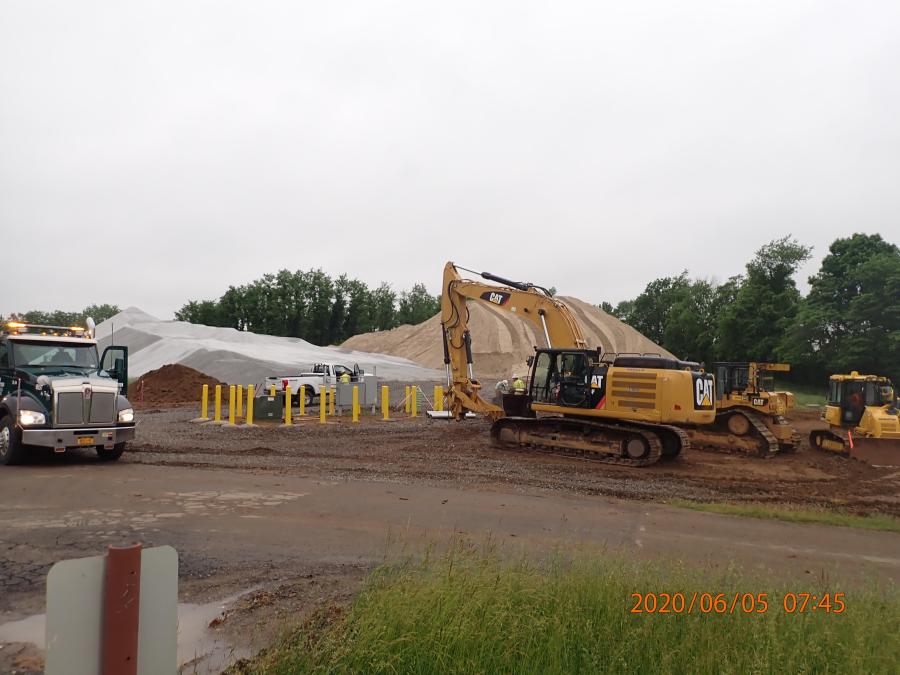 "The main challenge on this project is the need to achieve high productions for excavation and backfill," said Brian Sharp, PE, project executive, Thalle Construction Company Inc. "These productions are driven by the need to accomplish handling almost 1.5 million cubic yards of excavation, fill and imported sand and stone at three locations in two work seasons under contract constraints that only allow one site to be under construction at a time.

"We are currently operating the dewatering system, installed by our subcontractor, Keller North America, at the Dike, monitoring water levels within the embankment utilizing automated equipment installed by our subcontractor, GZA GeoEnvironmental Inc., while concurrently self-performing the installation of erosion and sedimentation prevention measures, site access roads and stockpiling sand and stone from offsite sources."

The successful completion of the activities to lower and monitor the ground water levels is considered a critical milestone, along with environmental protections and obtaining necessary offsite backfill materials, in order to begin the excavation of the first embankment.

"At this early stage of the project, the key work left to be completed includes the excavation of the existing embankment, installation of the filter blanket and collection system and the placement and compaction of the stockpiled soils as fill at all three project sites."

Sharp said weather will have a major impact on construction.

"The main components of this work are excavation and placement of soils," he said. "With strict tolerances for moisture content in the soils, stockpiles will need to be managed, protected and it's anticipated that a portion of the excavated material will exceed allowable moisture contents and require conditioning, in order to be incorporated into the fills. Excessive rain, and even lack of sunny and breezy weather, will extend the duration of the efforts required to obtain optimum moisture of the soils that will be placed to construct the new dam embankments." 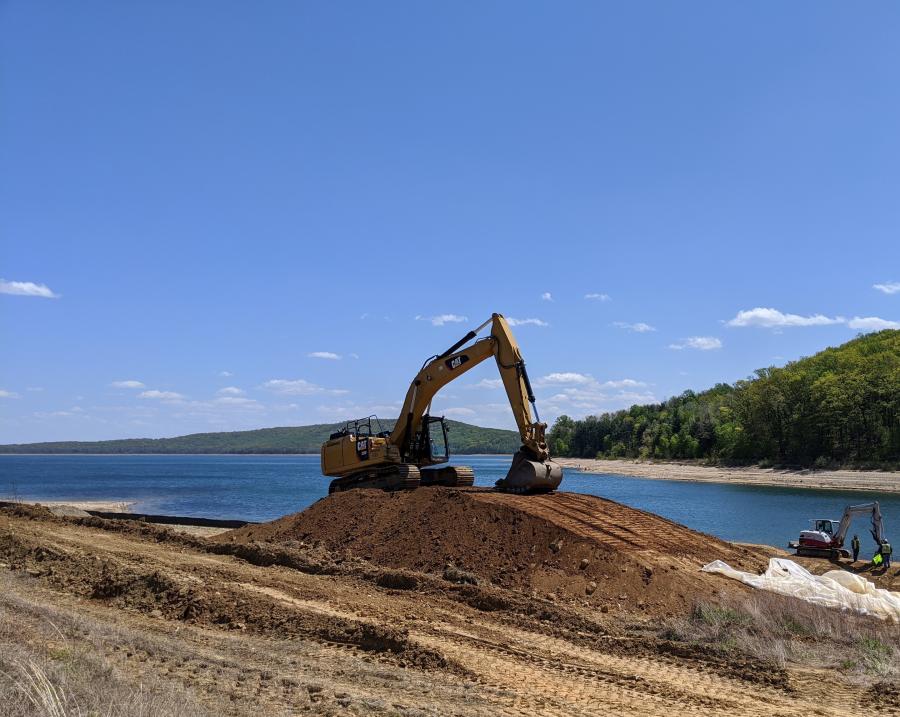 Excavation work will begin in July 2020 at one of the three earthen dams located at the reservoir. This work will involve phased excavation of the existing embankment. The soils will be removed with bulldozers and hydraulic excavators, and will be hauled to multiple stockpile locations using off-road articulating dump trucks.

Following the placement of sand, stone and a drain-pipe system, the stockpiled materials will then be excavated from the stockpiles, moisture conditioned as necessary, and replaced on the dam to form the new downstream face of the permanent embankment. For the fill activities, compaction equipment will be added to the dozers, excavators and trucks to ensure the fill soils are replaced with no voids.

Regarding the sedimentation control basin being constructed near the Canoe/Kayak launch, "A major part of site preparation involves measures to protect the environment, including the installation of sediment basins to collect and treat the stormwater runoff from the areas of active excavation," said Sharp.

"One of these basins has been constructed and is visible from a very popular boat ramp area adjacent to the dike project site," he added. "This basin will provide storage for stormwater runoff after rainfall. A device known as a skimmer will slowly discharge the stored runoff from the basin to the reservoir after allowing suspended soil particles to settle within the basin, protecting the clarity of the water in the reservoir."

To accomplish all major construction activities on site, including erosion and sedimentation control measures, excavation, stockpiling and fill activities, Thalle will maintain a fleet of heavy equipment primarily owned and operated by Thalle and its N.Y.-based parent company, Tully Construction.

"At times, smaller bulldozers for shaping basins and fine grading trenches for the pipe systems will be utilized also. Compaction will be achieved utilizing a combination of Caterpillar rollers, including a CS56B 84-inch smooth drum roller, equivalent padfoot roller and Caterpillar 815 compactors." 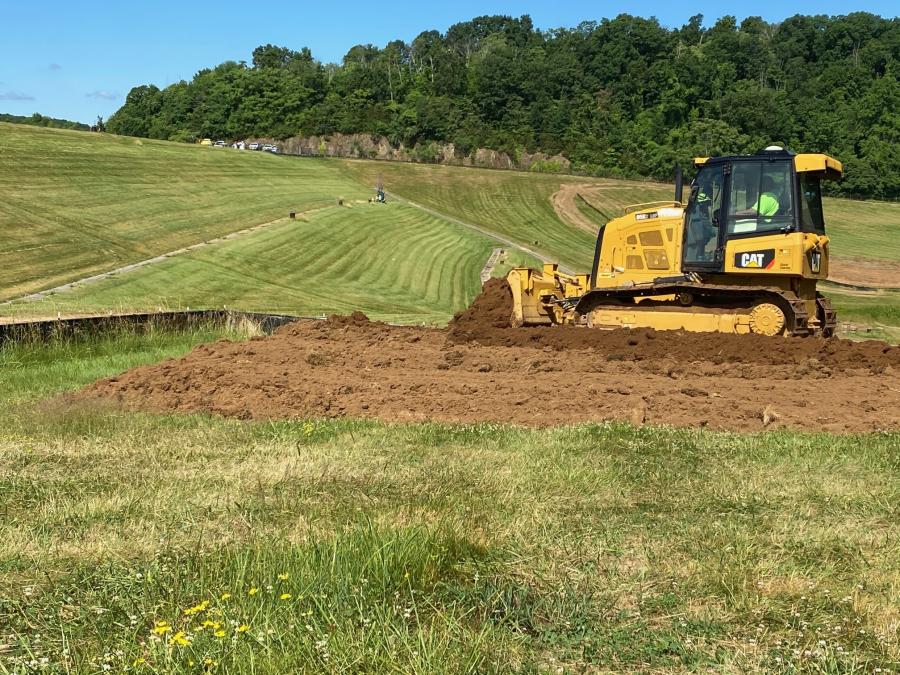 "Due to the phasing constraints and linear work schedule requirements, the excavation, placement of the filter blanket and placement of embankment will be the most time-consuming and major component of work to accomplish this project," said Sharp, who also noted, "The project requires a large amount of electrical infrastructure improvements being performed by Gilmore Electrical, under subcontract to Thalle. There will also be some minor underground pipe installation and abandonment."

Sharp said his company is a good fit for such a demanding project.

"Thalle Construction Company Inc. is based in Hillsborough, N.C. We are a premier constructor of heavy civil projects, ranging from construction of large diameter underground utilities, reservoirs, landfills, coal combustion residual handling and facility closures, heavy highway, structural concrete and dam construction and rehabilitation. Our work is focused throughout the Midwest, the South and through the Northeast region of the United States.

"We own and maintain an extensive equipment fleet tailored for the key elements of this project. Additionally, Thalle possesses key personnel in our operations and management staff that provide experience in completing similar complex and demanding projects. Since incorporation in 1947, Thalle has built a resume of successfully executing technically challenging, schedule driven projects, many of which contain identical and similar elements key to the success of the embankment rehabilitation at the Round Valley Reservoir. Thalle highly values the cooperation and teamwork demonstrated by Schnabel Engineering and NJWSA." 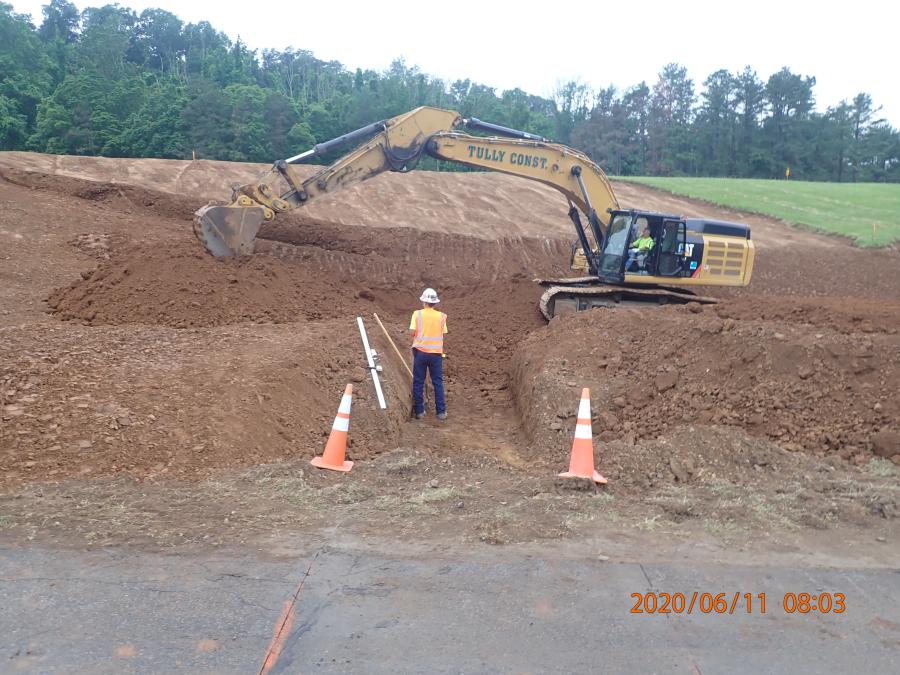 According to the official website, the Round Valley Reservoir was formed in Hunterdon County, after the state built three earthen embankments and flooded a large valley. The reservoir was named after the ring-shaped Cushetunk Mountain that surrounds the area. While the large valley was caused by the erosion of soft sedimentary rock, the surrounding mountain ridges endured due to the dense and durable underlay of volcanic rock.

Through construction, the reservoir will remain open to recreation. This includes the boat launch area, the campsites and hiking trail. The reservoir level has been lowered and will remain at or below its current level until the project is complete. Work began in January 2020, with completion expected at the end of summer 2022.

Said Brooks, "I feel a great sense of pride in this work and the contribution we as an organization are making to ensuring central New Jersey continues to have a reliable source of drinking water."

Darin Shaffer, NJWSA chief engineer, added, "Round Valley Reservoir is part of a larger water supply system called the Raritan Basin System that routinely provides raw water for more than 1,000,000 people in central New Jersey. We take the responsibility of managing that resource very seriously, and will continue to work hard to ensure we make good decisions to protect and enhance it." CEG