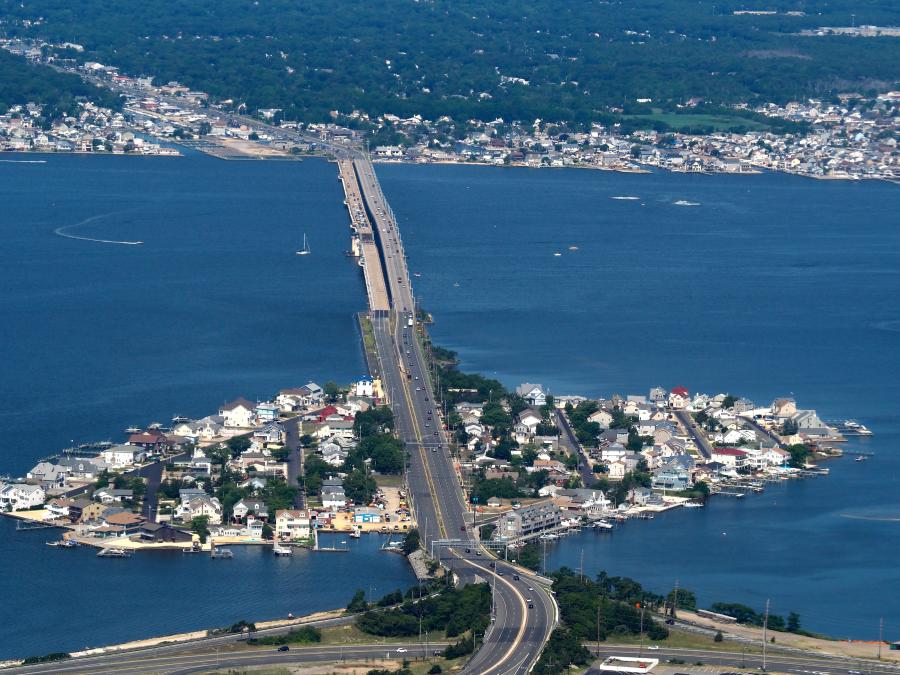 The eastbound Mathis Bridge and westbound Tunney Bridges are a pair of bridges carrying Route 37 over Barnegat Bay between Toms River and Seaside Heights. According to the New Jersey Department of Transportation (NJDOT), the Mathis Bridge was built in 1950 and is the older of the two bridges. It includes a double leaf bascule movable span at the navigational channel, and was identified as in need of repairs.

NJDOT noted that the federally-funded Route 37 Mathis Bridge over Barnegat Bay project will replace the existing bridge deck, which is now more than 67 years old, make traffic safety improvements to the warning gates, lights, barrier and railings, and repair and replace mechanical and electrical components that operate the moveable span.

To improve safety, the bridge deck width also will be upgraded from one 10-ft. lane and two 9-ft. lanes to providing three 10-ft. wide travel lanes and a 1-ft. wide shoulder for the left lane.

Construction began in the fall of 2015 and is anticipated to take place for three seasons, completing by summer 2018. The construction cycle requiring a full closure of the Mathis Bridge is limited to Nov. 1 to April 30 each year. During each of these construction cycles, summer traffic from approximately May 15 to Sept. 15 will not be affected, and all three current lanes on each bridge will be open to traffic. NJ-based Schiavone Construction Company will be the project's primary contractor.

“What makes this bridge project unique is its proximity to the Jersey Shore, a tourist destination during the spring and summer seasons,” said Dan Triana of NJDOT Communications.

“Construction on this project occurs during the off-peaks seasons, and then reverts back to 'normal' vehicular travel conditions during the peak tourist seasons. Most construction projects of this size would close access until the work is complete, but because of the importance of tourism to the region, the project was designed in stages so full access could be maintained during the summer season.

“In addition, the project team has worked closely with the U.S. Coast Guard to help reduce impacts to marine traffic while the movable span is under repair. Closures of the moveable span are limited to the winter season from December to April, while marine traffic is reduced.”

Triana noted that there are unique pre-construction techniques being used before materials arrive on site, designed to increase efficiency and accelerate construction within the limited seasonal timeframe.

A special high early strength concrete mix design is being utilized, enabling work to continue on schedule. The large quantity of precast concrete panels is stored for up to 90 days in batches in the yard where they are precast to eliminate creep and shrinkage of the concrete.

The steel grid for the panels also are manufactured and precast off-site in advance, to increase efficiency.

According to Triana, the Route 37 Mathis Bridge project has 176,000 sq. ft. of precast Exodermic deck, the largest presently in New Jersey. An Exodermic deck is comprised of a reinforced concrete slab on top of, and composite with, an unfilled steel grid. Precast Exodermic decks are light weight without sacrificing strength and permit considerable savings in construction time. The steel grid panels arrive to the site essentially ready for concrete. The grids are pre-cut, pre-formed panels allowing for quick placement.

“A constant challenge in the project has been coordinating construction activities between the work crews implementing the various stage shifts, and minimizing impacts to the community,” Triana said. “This coordination requires the cooperation of local officials, businesses and residents.”

Important factors listed by Triana that the project team has to keep in mind are the need to maintain a way on and off the island at all times in case of an emergency, and also the difficulty of maintaining a consistent seasonal construction schedule during the winter months.

“[So far], the project team — led by project manager, George Kuhn — has successfully managed to keep construction on the Route 37 Mathis Bridge on time and on budget,” Triana said.

As the bridge reopened for normal operation for the start of the summer season in late May 2017 (Memorial Day weekend), a new bridge deck was in place for the entire span, and a newly rebuilt bascule (or movable span) was complete. In addition, new 4-bar railings replaced the previous parapets; a new bridge operator's control desk; and approximately 80 percent of the new electrical components that operate the movable bridge and cameras were installed.

During the final 2017-2018 winter construction season, the final installation of new warning gates and lights, new bridge approaches and the cast-in-place anchor spans are expected to be complete.