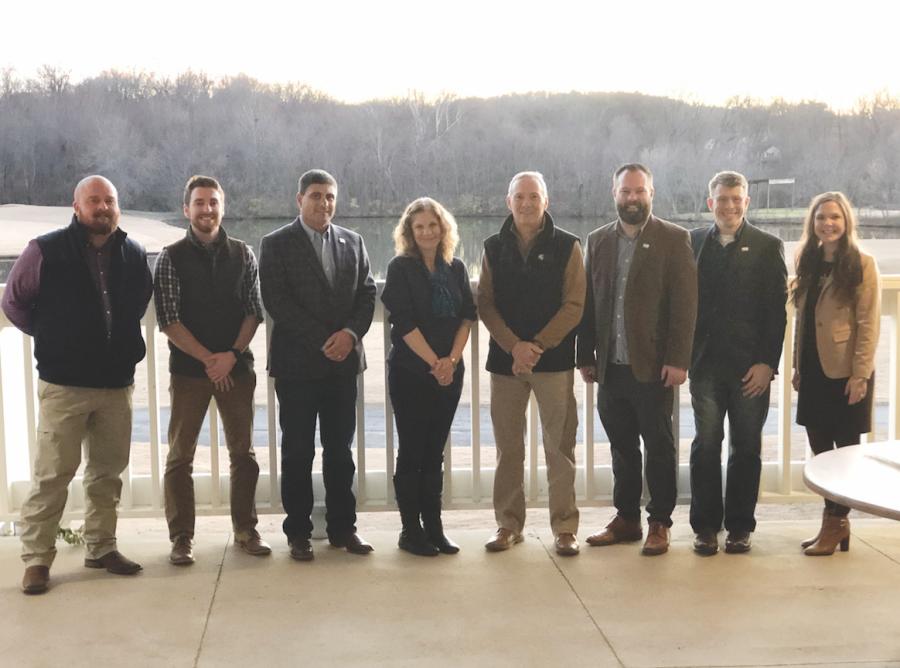 The board members of NUCA of Middle Tennessee chapter.

The Franklin Bridge Golf Club was the center stage for the NUCA of Middle Tennessee Chapter Year End Celebration. Members gathered to recognize the 40 founding members and present Donnie Mingus of Team Construction as the first NUCA of Middle TN Ditchdigger of the Year Award.

President Matt Mingus of Team Construction spoke to the members in attendance and emphasized the importance of the chapter to the underground utility construction industry in Middle Tennessee by creating a voice for contractors as a group, creating an industry for the future, as well as updating members on education and vital safety topics. "We are only a year in and we are already achieving many of the goals we set for the Chapter," Mingus stated. "Over this past year, we have orchestrated a number of speaking engagements on safety and educational topics. We partnered with Lucky Ladd Farms to put on a Kids Construction Fun Fest, where we interacted with over 200 children and their parents. The children had an opportunity to work hands on with things in our industry. We were able to get a proclamation from Governor Lee's office making Trench Safety Stand Down week official in Tennessee. During the Trench Safety Stand Down event, officials from TDOT approached us about issues they were seeing concerning contractors' traffic control and permits. This gave us the opportunity to address these issues as an industry without calling out contractors individually."

Mingus went on to say that in 2020 the chapter will be working with TN 811 on changes to the Tennessee Underground Damage Prevention Act. "We are working to continually identify opportunities for education and safety forums. We are also interested in finding ways to get our industry in front of a younger generation to bolster our work force."

The keynote was Department of Transportation Commissioner Clay Bright. Bright stated his office is looking to find new and better ways to coordinate utilities on transportation projects. He said he and his office are willing to work with NUCA of Middle Tennessee to find the best way to handle these issues since excavators are the experts in the field.

NUCA National Chairman of the Board, Dan Buckley of Garney Construction, also spoke about how important NUCA chapters are to the success of NUCA as an association and how collaborating with other NUCA chapters brings strength to the industry nationwide.