Investigations of the dam structure revealed that the concrete spillway is deteriorated and has a very low safety level. 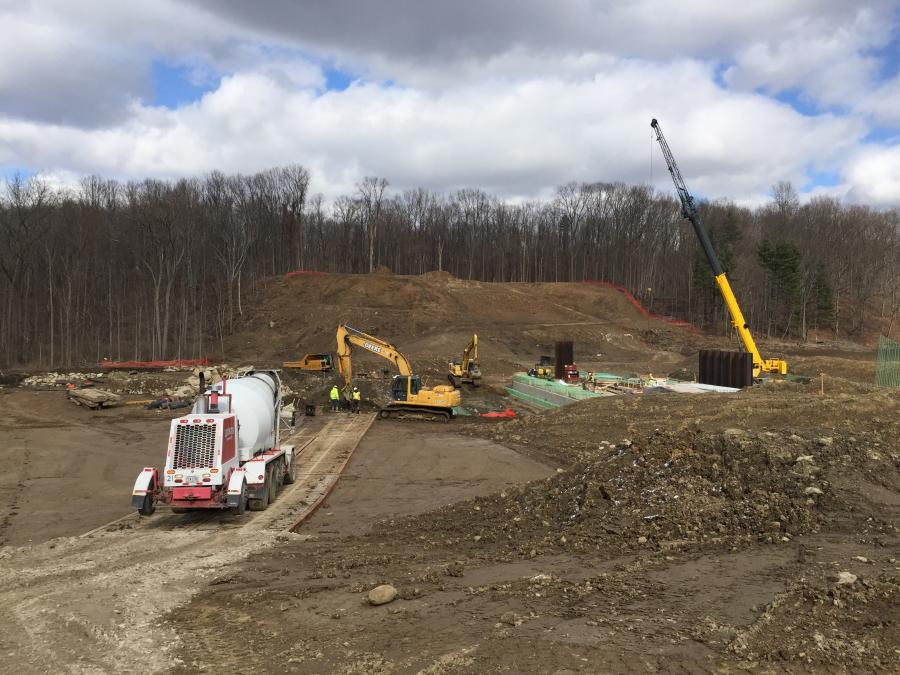 As part of its current $88.5 million statewide capital improvements spending plan, the Ohio Department of Natural Resources (ODNR) is replacing the dam and spillway at Mt. Gilead State Park in Morrow County at a cost of $7.8 million.

As part of its current $88.5 million statewide capital improvements spending plan, the Ohio Department of Natural Resources (ODNR) is replacing the dam and spillway at Mt. Gilead State Park in Morrow County at a cost of $7.8 million.

The dam was built in 1930. Mosser Construction Inc. secured the contract to rebuild the dam and complete the dam infrastructure improvements at Mt. Gilead Lake, which is scheduled for completion this fall.

The upper and lower lakes were drained last fall, followed by excavation and concrete construction.

The previous Lower Dam, near the Village of Mount Gilead, had a maximum height of 20 ft. and a 90-ft. long concrete ogee spillway that discharged water into Sam's Creek, which ultimately discharges into Whetstone Creek. The new dam features a concrete labyrinth spillway design that may appear to look like a large accordion, but is a unique design for Ohio dams. A similar labyrinth spillway design is also being utilized by ODNR in current dam improvement projects at Lake Loramie and Indian Lake State Parks.

A replacement dam was needed to address serious issues and the Lower Dam was rated as a Class I high-hazard potential structure.

“The deficiencies include insufficient storage-discharge capacity and seepage,” according to the project website. “There are additional concerns regarding the instability of the severely deteriorated concrete spillway and the entire dam embankment, along with concerns about the presence of trees and brush on the dam. ODNR previously contracted with Jobes & Henderson and S&ME to provide investigations and preliminary design alternatives. These investigations of the dam structure revealed the concrete spillway is deteriorated and has a very low safety level.”

“The project not only allows us to make needed dam improvements at Mt. Gilead,” said John Wisse, an ODNR spokesman of the project, “but also gives us an opportunity for complete lake rehabilitation leading to improved recreational opportunities such as sport fishing.”

According to Brian Afek, civil engineer of Michael Baker International, the firm that designed the new dam, the existing dam was unable to safely pass the design storm event and was not in compliance with current Ohio dam safety regulations.

“The labyrinth spillway design is the first of its kind at an Ohio public park,” said Afek. “The design provides a smaller concrete footprint and allows for outgoing flows to be controlled by the spillway geometry. For this project, a design requirement was to match current outgoing flows of the existing ogee spillway up to the 100-year storm event and to pass the probable maximum flood (PMF) event through the spillway without overtopping the embankment.

“This was accomplished by modeling the flows through the new spillway and performing design adjustments as needed,” he said. “The principal spillway crest elevation will be raised to elevation 1106.0 [raised 2.5 ft. compared to existing spillway crest] to provide for a higher normal pool. The increase in normal pool depth will not only increase the life of the lake, but will also allow for more recreation activities [current depth of lake is shallow due to siltation over the years].”

The entire existing earthen dam was demolished and is being rebuilt utilizing modern methods of construction and design.

“The embankment will feature drains, flatter slopes, and soils that will be compacted to a higher standard than the original dam —improving both the quality and stability of the structure,” said Afek. “All soils to construct the earthen embankment will come from the existing dam embankment and an onsite borrow source. The embankment crest will be raised approximately 10 feet to contain the PMF event. To combat further siltation of the lower lake, the Upper Dam is being rehabilitated and re-utilized as a sediment forebay; with the intent to trap sediments upstream before they reach the Lower Lake.”

As the lake was being drained, the fish were relocated to the waterway downstream of the spillway toward Whetstone Creek. Jim Leahy, Mosser's project engineer, used a controlled demolition of the spillway to persuade many of the fish to move to safety and as more water was removed, the fish, including migrating species, were herded to a spot where they could be captured in nets and placed into Whetstone Creek so that they could continue their passage to the Delaware Reservoir.

Afek estimated that about 75 percent of the fish went over the spillway within a 12-hour period.

Prior to demolishing the Lower Dam, Mosser crews diverted Sam's Creek so that they could take away lake sediment and prepare the subgrade for the new dam. A minimal number of trees were removed within the borrow source, located adjacent to the Lower Dam, so that borrow material could be used to construct the dam.

The control of water is critical to every dam project. Currently, the control of water protects the work up to a 100-year storm event. All soils used to construct the proposed dam embankment will come from the existing earthen dam and a local, on-site borrow source. The local borrow source will further serve as the new Boy Scout camp for the park.

The demolition of the lower dam spillway has been completed and a portion of the Upper Dam has been removed.

“Above normal temperatures and dry conditions were a boon for 2016's late year construction season,” said Eric Heis, the DNR's public information officer, “and crews were close to completing the demolition of the lower lake dam, excavation of a temporary water flow diversion channel, sediment removal, and the establishment of new erosion control measures and preparation for concrete slab work for January prior to the holiday season.”

By the end of 2016, completed work included the removal of the upper portion of the Upper Dam spillway, further demolition of the Lower Dam spillway and training walls, stockpiling of topsoil, and additional stabilization of the project site temporary haul road.

“Crews completed installing the Phase I diversion berms and the diversion channel with stream water diverted adjacent to the area where the new dam and spillway will be placed,” said Heis. “Work on the Upper Dam was placed on hold for a while construction efforts focused on the replacement of the Lower Dam and spillway.”

After the Lower Dam was demolished, Mosser crews diverted Sams Creek so that they could take away lake sediment and prepare the ground to pore concrete for the new dam.

“Dam construction is a little different than most other heavy civil projects,” said Rusty Parker, Mosser's project manager, “and it has its own unique challenges. Working in a lake bottom during the winter months posed a challenge unlike any other. While the warmer than usual winter weather was welcomed, it also proved to be a challenge because instead of solid frozen ground to stage on, we had soft mud everywhere.

“To overcome the mud issue,” he added, “we built access roads and staging areas by utilizing drill rig mats and crane mats. As we move forward with the concrete wall work, we will need to coordinate the embankment/backfilling operation with it. Keeping the concrete and embankment work coordinated while at the same time diverting the spring rains poses a challenge that requires planning. Fortunately our field personnel, along with Michael Baker's personnel, are very proactive at the planning table which helps prevent any potential issues.”

Parker noted that the project work site is extremely small.

“So all the work needs to be thoroughly planned out and executed in a way that maximizes what space is available,” he said. “The level of partnering between the A/E team, owner and contractors has been exceptional. This has allowed us to head-off issues before they become problems. I can't speak highly enough of the ability to work together on this unique project.”

“All of the concrete will be cast in place, including the labyrinth walls,” said Parker, pointing out that the concrete element of the upper dam will be lowered and resurfaced, and the regulated spillway will be removed when project is completed.

The demolition of the dams has resulted in the removal of 700 cu. yds. of concrete, 25,000 cu. yds. of earth and various other materials.

“It is anticipated that all earthen materials will be recycled and incorporated into the new dam,” said Parker, “while any borrow needed will come from on-site sources.”

Along with subcontractors, Mosser expects to have up to 20 employees on site on peak days. The subcontractors on the project are: Foundation Steel for reinforcing steel placement; Geotech Services Inc. for soil anchor installation; Complete Clearing for tree removal; Shelly & Sands for asphalt work; and K&R Excavating for landscaping/permanent erosion control work.

Mosser also is using a variety of cranes, including a 80-ton American crawler crane and a 30-ton Grove hydraulic crane. Other equipment includes: a Cat D6N and Cat D6 LPG dozers; a Link Belt 250 Long Reach, a Link Belt 290X2 and a John Deere 230 excavators; and rubber tracked carriers and Morooka 2200VDRs.

“Our main concern is the amount of mud that our equipment has had to work in,” said Parker, “and daily cleaning and maintenance is the best approach to this situation.”

“We rented the RTC Morooka from Newman Tractor and several excavators from Reco Equipment and CAT supplied the low ground pressure dozer as well,” said Parker. “These pieces of equipment were vital in our operations. Without their equipment and support we could not be where we are today.”