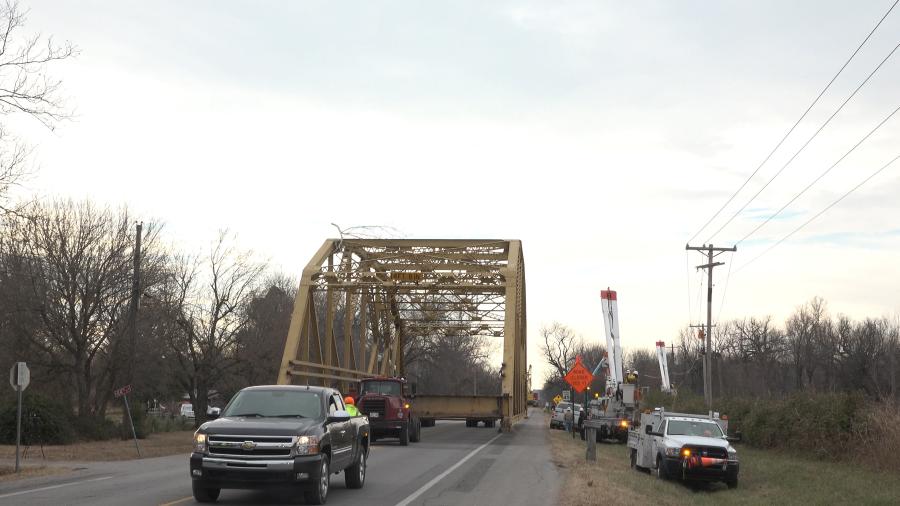 The bridge was built in 1940 and is a K-through-truss structure, a rather common bridge type in Oklahoma but very rare nationally. (ODOT photo)

It's not every day that traffic comes to a halt for a bridge moving down the highway, but that's just what happened on SH-11 in Tulsa County in December 2017.

The Oklahoma Department of Transportation is replacing the historic SH-11 bridge over Hominy Creek just north of Sperry. The bridge was built in 1940 and is a K-through-truss structure, a rather common bridge type in Oklahoma but very rare nationally. It met the requirements to be a part of ODOT's Adopt-A-Bridge program, which allows for a bridge to be donated, at no cost, to anyone willing to relocate the structure and maintain its historic character at a new location.

Following federal guidelines, the ODOT Cultural Resources Program makes historic bridges available for adoption in cases where rehabilitation is not possible and a replacement is needed. These bridges are typically smaller truss structures on the state highway and county systems. If a successful adoption can't be arranged then the structures are demolished to make way for a new structure.

This SH-11 truss structure was removed in one piece and transported to its new home on private land in the Skiatook area. ODOT is continuing work to build a new bridge over Hominy Creek. The bridge is expected to be completed in late spring 2018, weather permitting.