ODOT is designing a new bridge that will better accommodate modern traffic. 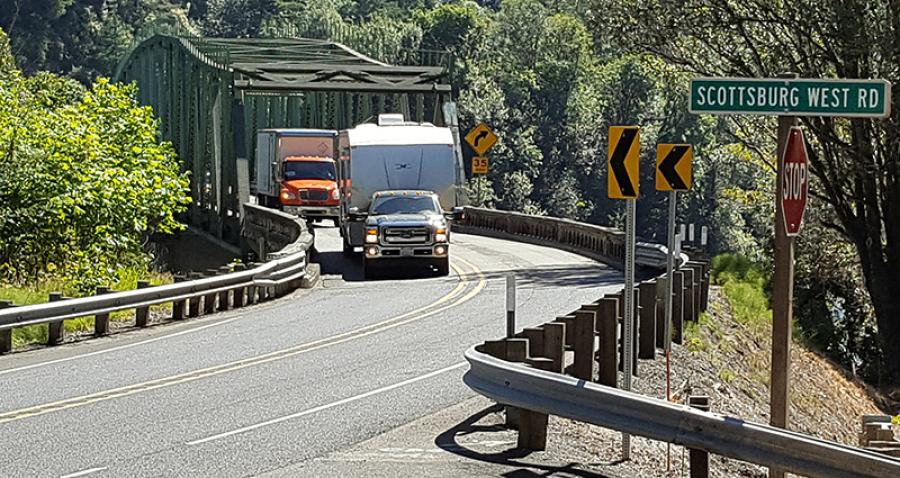 ODOT photo ODOT is designing a replacement bridge in the event that construction funding becomes available.

ODOT is taking the first step toward replacing the Scottsburg Bridge. While the money needed to build the bridge hasn't been secured, ODOT is designing a new bridge that will better accommodate modern traffic. If construction funding for a new bridge cannot be secured, ODOT will shelve the plans for the new bridge and focus on a variety of bridge repairs instead.

What Is the Problem?

Oregon 38 is a vital route between Interstate 5, the southern Oregon coast and the Port of Coos Bay. Although many other bridges along Oregon 38 have been replaced in recent years, the Scottsburg Bridge remains largely unchanged since it was built. Opened in 1929, during an era when most vehicles were small and speeds low, the bridge's narrow lanes and tight corners at both ends are less than ideal for modern traffic.

What Is the solution?

Over the years, ODOT has focused on maintaining the existing bridge and addressing problems as they arise. Fully repairing the bridge would involve sandblasting and repainting the green steel truss and repairing any bad steel sections, repairing and repaving the deck and replacing the deck joints, replacing the concrete railing, repairing the concrete pier caps, and strengthening the bridge to better withstand earthquakes. However, such repairs wouldn't address the more fundamental problems with the bridge — the narrow width, sharp approach curves and low overhead clearance.

Due to the need for so many repairs and improvements to the existing structure, ODOT believes the construction of a new bridge would be a better long-term investment. A new bridge could better accommodate modern traffic and would be more likely to withstand a large earthquake or other natural disaster than the current structure.

As a result, ODOT is designing a replacement bridge in the event that construction funding becomes available. The new bridge will be designed according to modern standards and built just downstream of the existing structure. Due to the cost of maintaining two structures, the old bridge would be removed. Most other details of the new bridge have yet to be determined. Depending on funding, a new bridge could be constructed as early as 2019. If funding for a new bridge cannot be secured, ODOT will proceed with the repairs mentioned above.