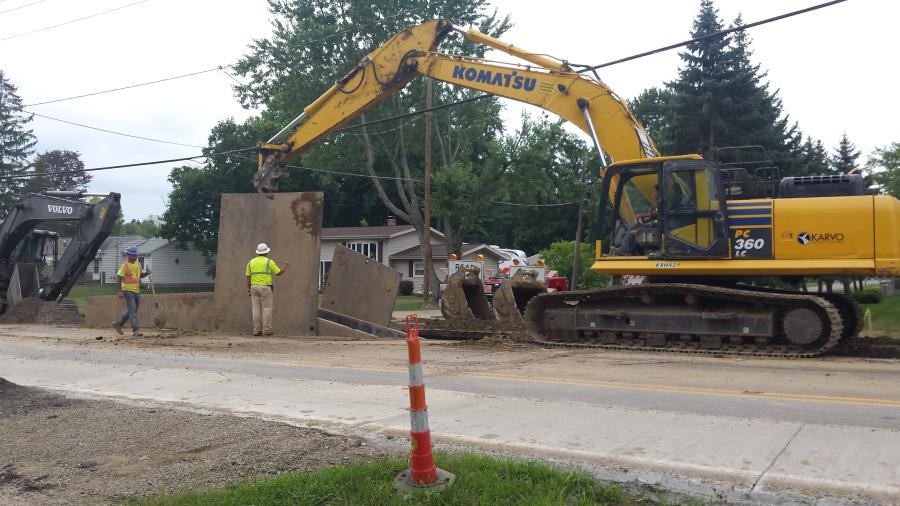 The city of Wadsworth is the center of a $12.4 million Ohio Department of Transportation (ODOT) road project that is widening a section of SR 94 (High Street) to two lanes in each direction with an added median in the center and a multi-use path.

The city of Wadsworth is the center of a $12.4 million Ohio Department of Transportation (ODOT) road project that is widening a section of SR 94 (High Street) to two lanes in each direction with an added median in the center and a multi-use path.

The work includes widening the highway bridge, realigning the Great Oaks Trail/Park Centre Drive intersection, the construction of corridors or alleys to reach businesses, the installation of a median along the center of SR 94, placing of additional traffic signals and a mutli-use path for pedestrian and bike traffic. The project is being funded by ODOT and the city.

Karvo Paving Company started the work in last May, and while scheduled to complete the project in June 2018, the company is looking to deliver the project in November or December 2017.

The goal of the project is to improve safety, access and the flow through the corridor, with commercial and residential sections. The project includes a bridge spanning Interstate 76.

"Left turn crashes and angle crashes on SR 94 are being addressed by controlling access," said Julie Cichello, ODOT's traffic engineer. "Previous issues involved difficulty making left turns in and out of drives because of the traffic volumes. The city and residents asked for the multi-use path to be added to the project, which was added. This will allow for added room for pedestrians and cyclists. The project will increase roadway capacity and improve the flow of traffic which will allow for better mobility for through movements on SR 94. The alleys are an important part of the project to maintain access to the businesses where motorists would no longer be able to turn into off of SR 94 because of the center median being installed."

Chris Brown, an ODOT engineer, noted that there were some issues to overcome.

"With there being so many businesses within the project limits," he said, "maintaining access during construction would be difficult, The widening of the bridge could not be done in one season, it had to be done in two seasons, the maintenance of traffic was difficult and there were a large number of overhead and underground utilities. The project team worked with ODOT and city officials to overcome these obstacles by having frequent meetings to coordinate the progress."

The 2016 construction season — May to December, saw continued utility relocation, drainage work south of I-76, the installing of a water line south of I-76, installation of new traffic signals, the widening of the bridge and the completion of the eastbound road section.

The 2018 work, if needed, will focus on bridge painting, concrete sealing, landscaping, final striping work and the clean up.

"We worked through the winter to get ahead of schedule," said John Chiarappa, Karvo's project manager, "and the vast majority of the underground installation was completed. At the rate we're going, we very well may be able to complete 100 percent by the winter of this year. There were conflicts with the overhead utilities, primarily with communications, at the beginning of the project — the relocation was behind schedule.

"This affected our utility and bridge work — at no fault to Karvo, and following discussions, ODOT and the city allowed us to work out a new sequence and work in other areas," he said. "A job that could have been delayed and pushed into the 2018 season, because of the innovations we proposed, we ended up being ahead of schedule. All of the utilities have now been relocated and we can focus on the road work. We had a few months to plan before the work started and typically the ODOT and the contractor have a pre-construction meeting where you turn a planned schedule. Knowing the hurdles we had in front of us with the utility contractors, we expressed our concerns to ODOT early and gave them a plan and schedule ahead of time."

Chiarappa pointed out that the new schedule has avoided months of delay times, shut downs, and has reduced the cost of the project.

Working in a confined space is not easy, but solid communications with the public and businesses helps to negate this issue. Because the area is nearly fully developed and other properties are being developed, Karvo established a construction yard off site to store materials, vehicles, and set-up offices.

"This is a booming area and we're surrounded by businesses," said Chiarappa. "It is a very tight area and it has been a chore to confine everybody to the right-of-ways and work agreement areas. We transport a lot of materials from the yard to the work sites on a daily basis. The concrete supplier is not far away and the aggregate suppliers are moderately close by. Before any construction began, it was a traffic nightmare.

"The main reason they are doing this project is to have a better flow of traffic," Chiarappa said, "and when you close lanes and shift traffic, it backs it up more and our people and trucks also get stuck in it. If you can't move your people, there goes your efficiency. It has been as good as it can be out there. We're following the manual traffic standards and going above and beyond that to keep traffic moving rapidly and avoid people flying down the road at 55 mph through the work zone."

The project has multiple work sites and on March 17, work began on the westbound section of SR 94. The J. D. Williamson Construction Co. Inc., the bridge subcontractor, is doing some additional bridge work, as is Thompson Electric, the electrical subcontractor, which is installing new signalization at new and revised intersections.

"J.D. Williamson is doing a wonderful job," said Chiarappa, "and were a large part of getting innovative with the utility issues. They are have been great to work with."

The striping and installation of the traffic island, which extends almost along the entire project, are being left to the end.

"We recycle concrete, asphalt and topsoil," said Chiarappa. "The concrete and asphalt are brought to recycling plants. We work with materials suppliers in the Cincinnati, Dayton and Columbus areas — northeastern Ohio — and we make sure that whenever possible, we forward all materials for recycling purposes and purchase that material right back."

The project's two other subcontractors are A&A Safety for striping and CJ Zack for landscaping.

The work, done in day and night shifts, has about 25 people on-site on an average peak day. Much of the bridge work was done at night, as was the asphalt installation and paving. For the residential area, the city waved ordinances restricting working at night. During the winter, there were about 12 people working on the bridge and underground utilities.

Karvo is using a variety of equipment, including Komatsu 228 and 360 excavators and Cat excavators both with GPS controls; Komatsu D37, D39 and D58 dozers and Cat D4, D5 and D6 dozers; John Deere 310 and 410 backhoes; Cat, Vogele and Dynapac pavers; and Sakai compactors.

"We have the support of our Komatsu and other dealerships that we deal with," said Chiarappa. "The majority of wear and tear issues are with our paving equipment — augers and drive systems — and we usually repair that stuff in the winter. Typically, our crews work all their asphalt pavers through the summer — heavy-duty, hard — and are rebuilt in the winter.

"Hydraulic line and things like that can go without any warnings," he said, "and our mechanics are fully equipped with hose makers and key repair equipment. If we blow a hose, we're fixed up between 30 and 60 minutes and running again. All our Komatsu equipment is on Komtrax and that is linked to our dealer and maintenance shop and red flags come up when it's time to change the oils, hydraulic filters, and so forth."

For equipment without remote monitoring systems, superintendents log the operational hours of vehicles weekly to help with servicing schedules. The company has between 250 and 300 people at job sites throughout the year and a lot of equipment being used daily.

"We try not to leave anything to chance," said Chiarappa.

The company buys its equipment and vehicles from Columbus Equipment Company, Ohio CAT, The Mclean Company and Murphy Tractor.
ceg
For this project Karvo purchased a Komatsu 210I GPS equipped dozer that can dig right on-grade and Komatsu 320 loader. —CEG