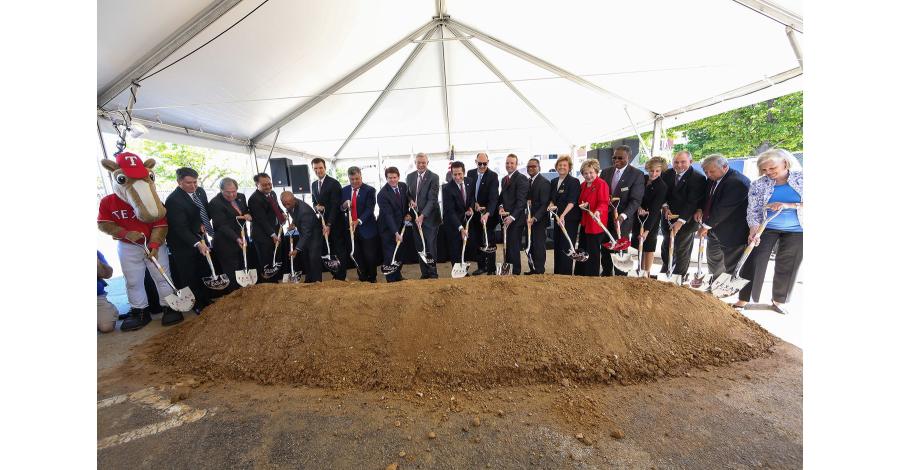 Texas Live! photo Officials gather to celebrate the groundbreaking of Texas Live!. The project is part of a greater $4 billion vision for the Arlington Stadium District that includes the Rangers new $1 billion ballpark and the preservation of Globe Life Park and will set a gold standard for sports and entertainment districts across the country.

The Texas Rangers and its development partner, The Cordish Companies, gathered on March 29 to celebrate the groundbreaking of Texas Live!. The Rangers and Cordish were joined by Arlington Mayor Jeff Williams, Arlington City Council, and community and business leaders from Tarrant County and the city of Arlington to celebrate this exciting milestone that will cement Arlington as the premier sports, entertainment and hospitality destination in the country for decades to come.

The groundbreaking ceremony for the $250 million world-class development was held on the project site in Arlington, Texas — a location that will house more than 200,000 sq. ft. (18,581 sq m) of best-in-class restaurants, retail and entertainment, as well as a 5,000-capacity outdoor event pavilion when it debuts next year.

The project also will be anchored by an upscale full-service, 300-room convention hotel and 35,000 sq. ft. (3,252 sq m) of meeting/convention space. The hotel/convention facility will feature a leading brand and management team that will be announced at a later date.

Texas Live! is part of a greater $4 billion vision for the Arlington Stadium District that features the Rangers new $1 billion ballpark and preservation of Globe Life Park. The project will bring over 3,000 new jobs and more than three million new visitors to Arlington which already welcomes 14 million annual visitors.

“It's an exciting day for us to come together with our development partners, The Cordish Companies and the city of Arlington to celebrate this major milestone for Texas Live!,” stated Rob Matwick, executive vice president of business operations for the Texas Rangers. “We have an incredible vision for the Arlington Entertainment District and today's ceremony continues that forward momentum of our commitment to deliver this one-of-a-kind project to Arlington.”

“Already, Arlington is the proud home of the original Six Flags Over Texas, the Texas Rangers and the Dallas Cowboys. Together these entities create a world-class entertainment destination, attracting tourists from around the globe,” said Arlington Mayor W. Jeff Williams. “It has been a dream for Arlington to further develop our Entertainment District with projects just like Texas Live! and its upscale, adjoining hotel. With today's groundbreaking, we are one step closer to making that dream a reality and cementing Arlington as the Entertainment Capital of Texas. Texas Live! is more than just an entertainment destination. It's a catalyst development for Arlington that will help take our community to the next level.”

Texas Live! will feature 200,000 sq. ft. of best-in-class local, regional and national dining and entertainment. Several premier venues have been announced for the district including:

Rangers Republic: the “ultimate fan clubhouse” for Rangers fans during home games, away games and all year-round. A celebration of the Rangers heritage past, present and future, Rangers Republic will be a two-level, 30,000 sq. ft. (2,787 sq m), family-friendly dining and entertainment venue that will allow fans unprecedented access to the Texas Rangers.

Live! Arena: the heartbeat of Texas Live! — a multi-level, central gathering place comprised of more than 35,000 sq. ft. of best-in-class dining and entertainment options. Live! Arena will be the “living room” of Texas Live!, providing fans with one of the best sports viewing experiences imaginable and will be the ultimate place to celebrate the Rangers and all Texas sports.

Arlington Backyard: a 5,000-capacity outdoor event pavilion that will become the “backyard” of Texas Live! Arlington Backyard will host more than 250 annual events including cultural activities, art shows, regional and national concerts, charitable functions and community events and will serve as the launching point for major festivals throughout the entire district.

PBR Country Bar: The flagship PBR bar at Texas Live! will be the largest PBR venue in the country. Born from the toughest sport on dirt, the PBR country bar at Texas Live! will be a powerhouse concept that brings an authentic country experience to Arlington, marrying an electric combination of “cowboy cool” and big-time, Texas-sized entertainment. The country's flagship PBR will exceed 1,500-capacity and will feature a 7,000-sq.-ft. (650 sq m) balcony overlooking Arlington Backyard.

Guy Fieri: The Emmy-award winning chef, restaurateur, author and TV personality will be launching a one-of-a-kind, flagship restaurant concept for the project that will be developed specifically with Texas Live! in mind.

Revolver Brewing: Known for bringing a fresh perspective in world-class craft beer in the Dallas/Fort Worth region, Revolver Brewing will be opening a working brewery at Texas Live! where customers can enjoy Revolver's flagship brands, like Blood and Honey, as well as one-of-a-kind specialty beers specifically crafted for Texas Live!

Lockhart Smokehouse: The family behind the iconic brand have deep roots in Texas and will be bringing the Lockhart barbecue tradition to Texas Live!. Guests will be able to experience Lockhart traditions such as Kreuz Market sausage, as well as other Texas standards including brisket, ribs and other meats smoked low and slow over Texas post oak.

“We're proud to join our partners, the Texas Rangers and the city of Arlington to celebrate this important milestone,” stated Blake Cordish, vice president of The Cordish Companies.

“Texas Live! and the new Rangers ballpark will set a gold standard for sports and entertainment destinations. The Arlington Entertainment District represents a once-in-a-generation opportunity to develop a transformational project located in the epicenter of the Dallas-Fort Worth metroplex and anchored by world-class entertainment venues attracting millions of visitors a year.”

The Texas Rangers and The Cordish Companies are proud to announce that Texas Live! will be constructed by a joint venture partnership of Manhattan Construction Company and Arlington-based Con-Real. Additionally, the development team has engaged Arlington-based LeVis Consulting Group to provide construction management and owner's representation services throughout construction.

Nationally recognized Manhattan Construction Company joins the team as one of the largest, privately-held construction firms in the nation, widely known for building high-profile, technically-difficult mega projects such as AT&T Stadium, one of the premier sports venues in the world.

Con-Real, recognized as one of the most established full-service African-American construction and real estate firms, has experience in more than 3,000 projects including entertainment, commercial, hospitality, educational, industrial and technology facilities.

This announcement marks an important milestone for the city of Arlington as the first time a project of this size and scope has had a local, minority-owned business positioned as a joint venture partner to oversee construction.

“We are thrilled in our joint venture partnership with Manhattan Construction Company on this momentous project and to join the Texas Rangers and The Cordish Companies in setting a new standard for MWBE participation in Arlington,” stated Gerald Alley, president and CEO of Con-Real. “We are honored to be part of such a transformative project that will lead to years and years of future development and growth for the city.”

The Texas Rangers and The Cordish Companies continue their commitment for Texas Live! to serve as a model project that will create maximum community benefits to the city of Arlington and its residents. The partnership previously announced their commitment to an unprecedented Community Benefits Plan that includes the creation of 3,025 new jobs; a 25 percent MWBE goal for the construction of the project; apprenticeships; local and diverse workforce hiring; community event bookings; and the creation of a Community Advisory Committee.

Comprised of representatives from the city, community and civic organizations, and college/universities, the Community Advisory Committee is providing advice and assistance with the implementation of the Texas Live! Community Benefits Plan. The Texas Rangers and The Cordish Companies are proud to recognize the following organizations who will join them in representing the committee:

• The University of Texas at Arlington