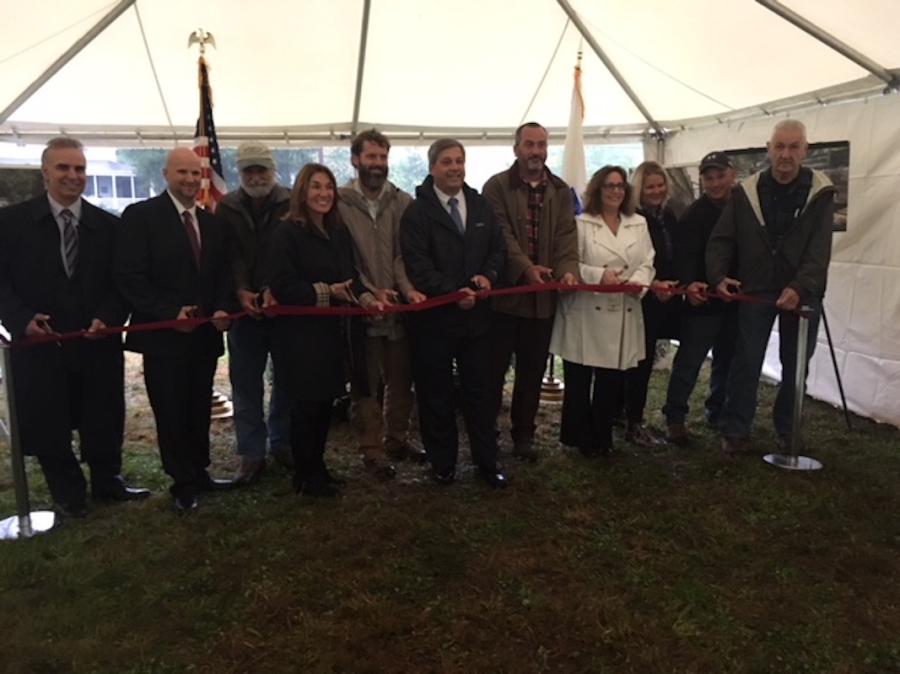 Officials celebrate the completion of the project to rehabilitate the bridge that carries Main Street over the Parker River in Newbury.

Lt. Gov. Karyn Polito joined Jonathan Gulliver, highway administrator, members of the Massachusetts Legislature, municipal officials and local leaders to celebrate the completion of the project to rehabilitate the bridge that carries Main Street over the Parker River in Newbury, which is the first project completed through the Baker-Polito Administration's Municipal Small Bridge Program.

Created by the Administration in 2016, the Municipal Small Bridge Program provides funding to cities and towns to aid in the replacement or preservation of municipally-owned bridges between 10 and 20 ft. which are not eligible for federal aid, and are at high risk for full or partial closure. The town of Newbury received $360,000 for its bridge rehabilitation project through the first round of the Municipal Small Bridge Program in 2017.

“Our administration created the Municipal Small Bridge Program to partner with cities and towns on improving local infrastructure and providing more reliable transportation,” said Gov. Charlie Baker. “Through grant programs like Municipal Small Bridges, we work with cities and towns to give them the flexibility to address projects that are most important to their communities.”

“We are pleased to celebrate the successful completion of the first Municipal Small Bridge Program project in Newbury,” said Polito. “Our administration is committed to partnering with cities and towns to help upgrade transportation infrastructure and increase connectivity between communities, and we thank everyone who has been involved in carrying out this bridge rehabilitation project.”

The full scope of work for the project in Newbury included reinforcing the bridge's concrete deck and deck beams, installing a new railing system, adding new concrete slabs to support the railing system, and utility operations. Work began in May 2018 and was completed three weeks ahead of schedule in July 2018.

The Baker-Polito Administration has awarded a total of approximately $23 million to 48 communities across the Commonwealth since creating the Municipal Small Bridge Program in August 2016. The majority of construction projects are currently in the construction phase, and Saugus and Medfield have also now completed bridge projects that were funded through this program.

“The Municipal Small Bridge Program is another example of Governor Baker and Lieutenant Governor Polito's focus on investing in our transportation network and helping our communities improve their own infrastructure,” said Transportation Secretary and CEO Stephanie Pollack. “This bridge rehabilitation project will ensure that people can continue to travel along this roadway without utilizing a lengthy detour route, and we thank everyone who has helped make this project a success.”

“This is the first project completed through the Municipal Small Bridge Program and we look forward to seeing many other similar projects completed throughout Massachusetts,” said Gulliver. “These types of bridges may be small but they are important because they allow first responders, families, workers and residents to reach the places they need to go without having to be detoured along alternative routes.”

The Administration has also awarded a total of approximately $30 million in construction funding for 103 Complete Street projects since creating a funding program for Complete Streets in February 2016. This program funds local, multimodal infrastructure projects that improve accessibility for bicyclists, pedestrians, public transit users and people using other forms of transportation. An additional $900 million has been authorized through the Chapter 90 Program which funds municipal road and bridge repairs.

“The partnership between state government and the town made this project happen, rehabilitating a bridge that needed repair by providing the funds that might otherwise not be within reach in a municipal budget,” said Senator Bruce Tarr.

“I would just like to express my gratitude for the Baker-Polito Administration's commitment to our community,” said Newbury Town Administrator Tracy Blais. “The Municipal Small Bridge Program grant of $360,000 and MassDOT's guidance throughout the project were instrumental to its successful completion; under budget and ahead of schedule. We were pleased to be the first project completed under this initiative and look forward to partnering with the administration in the future.”