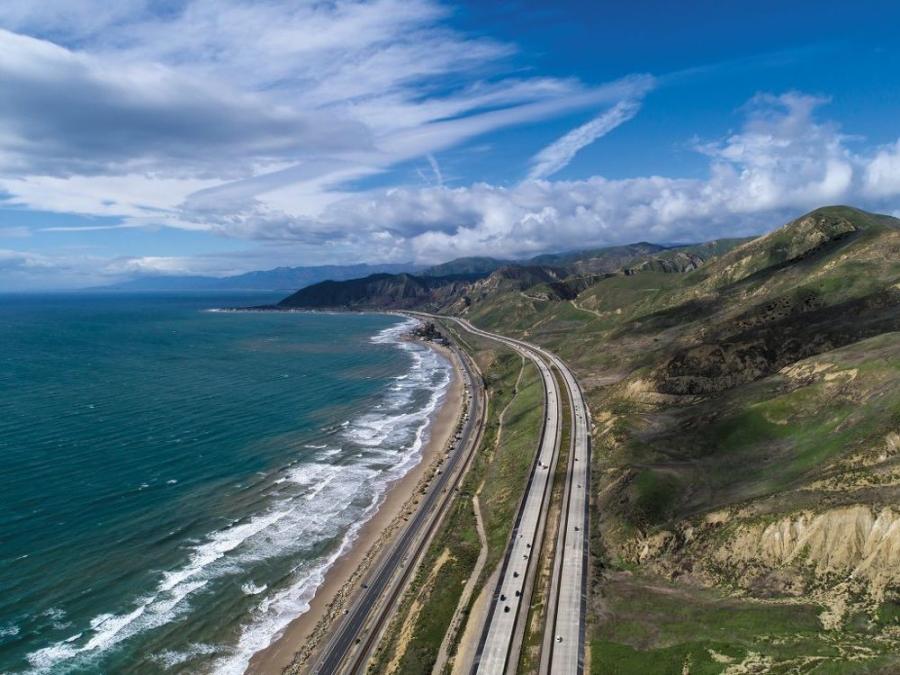 OHL USA crews are performing upgrades to U.S. 101 Ventura Freeway, which ranges from four to five lanes in each direction, located in the city of Calabasas (Los Angeles County).

Since July 2020, crews from OHL USA Inc. have been replacing 19.3 mi. of concrete median barrier on U.S. 101 (Hollywood Freeway/Ventura Freeway) to improve the safety of motorists via a $49.7 million project (total programmed cost) initiated by the California Department of Transportation (Caltrans).

The work, which is being done primarily at night, is expected to be completed in early 2023. This section of highway, which ranges from four to five lanes in each direction, is located in the city of Calabasas (Los Angeles County) and covers the area from the Pilgrimage Bridge in Hollywood to Valley Circle Boulevard in Woodland Hills.

"This is a major commuter corridor that connects Ventura County to Los Angeles County," said Jeremiah Teves, public information officer, Caltrans District 7. "It is replacing the existing concrete median barrier to improve its effectiveness and reduce median collision severity for motorists and is part of a district-wide safety goal. The increased height of the upgraded median barrier will provide glare protection from opposing traffic."

Thus far, OHL USA has reconstructed 1.3 mi. of median barrier from Pilgrimage Avenue to Barham Boulevard. The 2021 construction season will see crews focus their efforts from the 170/101 connector to 405/101 connector.

The first step to construct a new section of barrier is to widen the base. 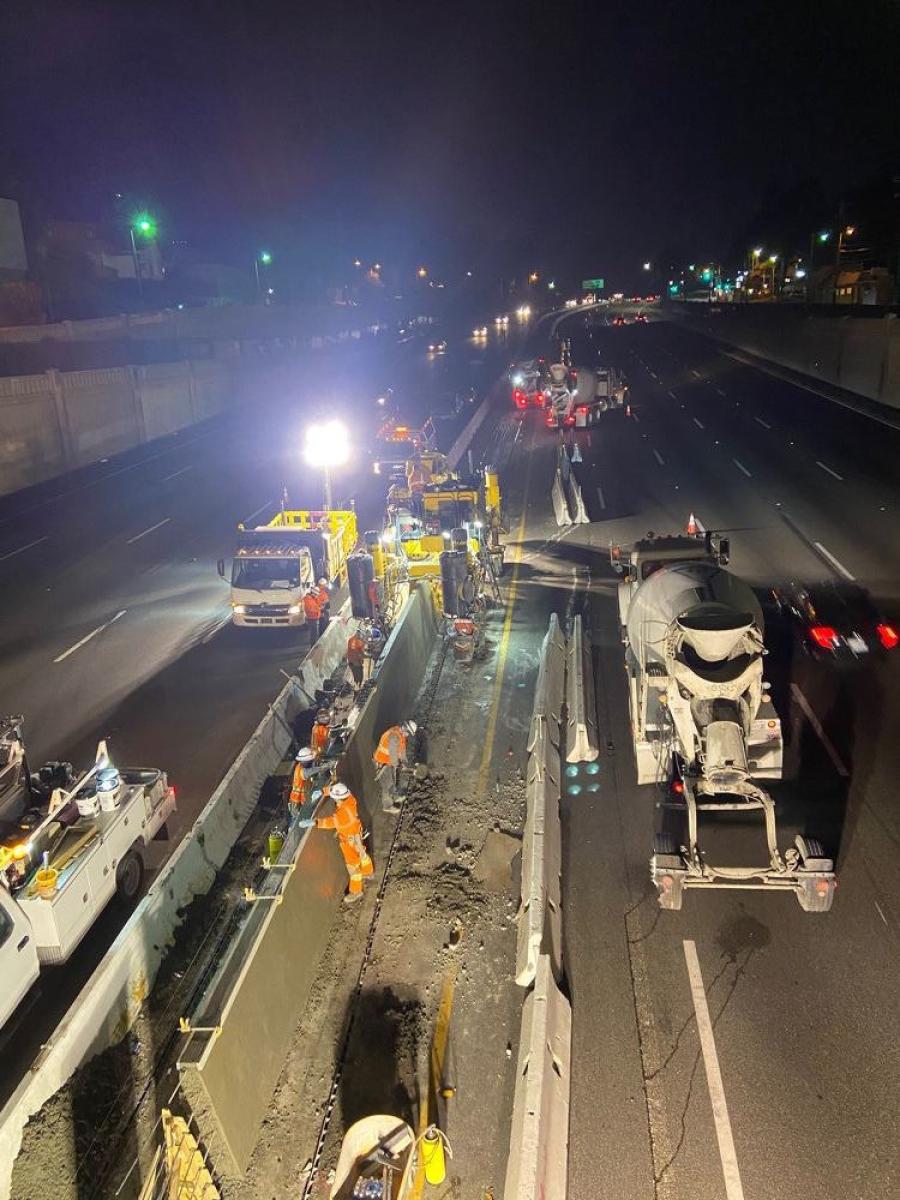 "After removing the old barrier, the base is compacted and lean concrete is poured," said Teves. "The new barrier is then formed and poured in place. This is a slip form barrier. The concrete takes 28 days to cure completely."

Key equipment for the demolition includes a Cat 325 excavator and a Cat 450 backhoe and breaker for the construction; and a GOMACO Commander 3 paving machine. Portable lighting units and the concrete delivery trucks have also been crucial.

As crews gain experience with demolition and construction, their efficiency has increased and many challenges and problems can be anticipated. With limited time at night, which include setting up and winding down, maximizing time is second nature to the project and crews are able to transition to the next step rapidly.

"Team members work together with open communication and good relationship," stated the OHL team, "and everyone is contributing to improve the workplace to safely and successfully achieve the goals."

The demolition of the old median should generate 5,544 tons of concrete and 1,240 tons of steel, with the material being sent to Sun Valley Landfill.

"The challenges of the night work are ensuring the safety of the crew and the public," said Teves. "Additionally, lighting also poses as a challenge for the crew. K-rail is being used to separate the construction crews from traffic and traffic cones are also being used to close adjacent lanes. CHP is present during night work. The contractor and State are partnering effectively in order to complete the project within time and budget." 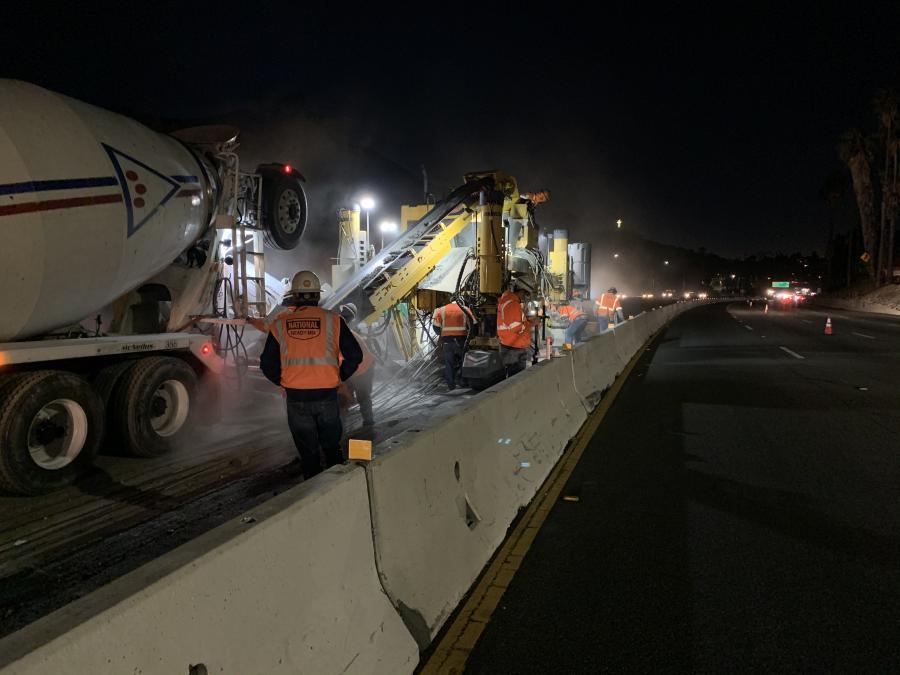 Average sections slated for replacement are between two to three miles long, with crews moving from section to another.

"It takes approximately two to three weeks to demolish a section and the challenge is ensuring that construction noise does not exceed allowable noise limits," said Teves, who noted that the depth of the base of the median is approximately 2 ft.

Materials are removed within one to two days. The existing barrier is broken down to small sections that can be lifted and disposed in dump trucks. The adjacent two lanes are closed on both sides for safety during demolition. At times there are different crews working on demolition and building new barrier.

Peak days has many OHL and subcontractor personnel on-site. The key subcontractors are Maneri Traffic Control for traffic control; Next Century for rebars; and Payco for striping.

"Vandalizing machinery is one of the challenges," stated OHL. "Stealing Catalytic convertors or spray painting on equipment are examples of what has happened. We would contact the vendor same night with request for exchanges or to fix issues." 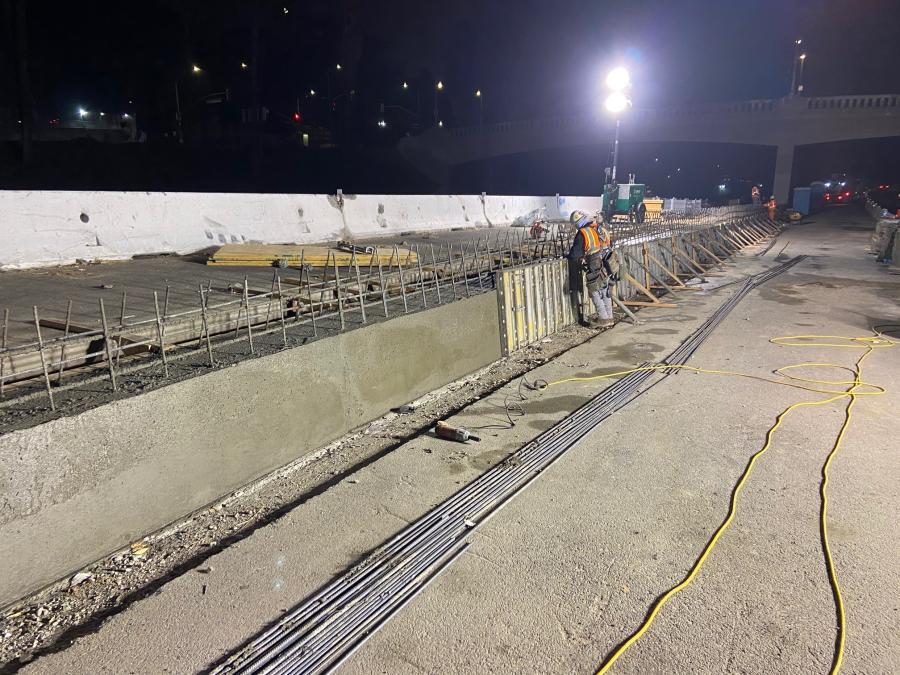 "We work together [to maintain] good relationship," stated OHL, "and giving accurate direction and communication is best way to help each other, which minimizes challenges.

In terms of traffic management, some lanes may be closed in either direction or both directions simultaneously to create a safe work zone for workers and motorists.

"At least one or two lanes in each direction will remain open for traffic while work is underway," said Teves, who noted that California Highway Patrol (CHP) officers regularly patrol the area to enforce the 55 mile-per-hour speed limit.

Motorists are encouraged to "Slow for the Cone Zone" and be "Work Zone Alert." To help ensure compliance, traffic fines have been doubled in construction zones. OHL is permitted to close lanes or ramps for extended periods as needed.

Residents and businesses near the freeway are experiencing noise, vibrations and dust associated with the construction activities.

"Loud noises may be heard during the demolition phase," said Teves. "The noise will dissipate as construction progresses from each location. We are monitoring noise levels during construction to minimize the impact to local neighborhoods." CEG