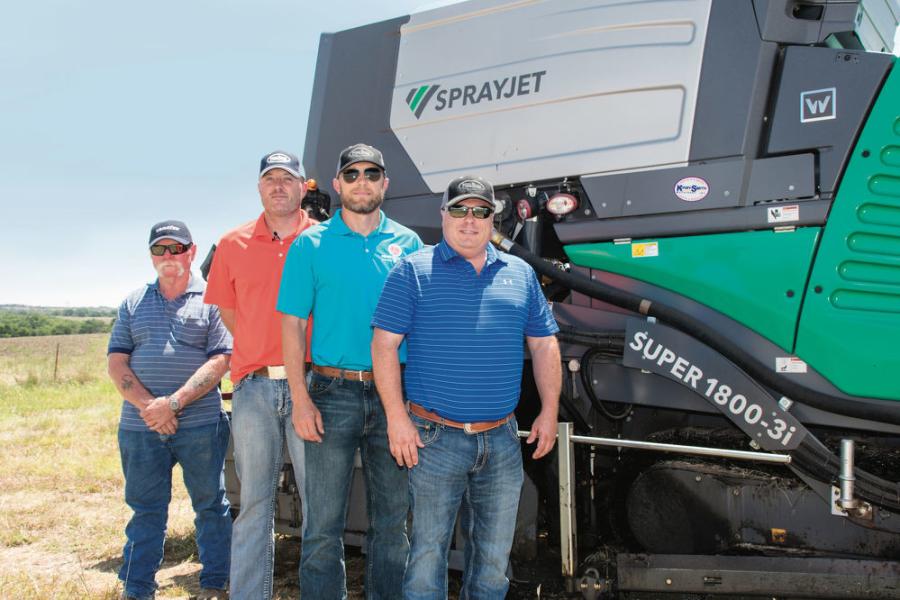 The history of Highway Contractors Inc. is long and varied. It includes changes in names, ownership and types of work. But, one thing has remained nearly constant through more than five decades — the Adams family lineage.

“What we specialize in may have shifted, but with a slight exception, a family member has been at the helm from day one,” said Ashley Adams, president of Highway Contractors. “It's rare for that to be the case in any industry, especially construction, so that's a real source of pride for us.”

Adams and her nephew, Jake Kerl, are the current owners of the Guymon, Okla.-based business, which today mainly focuses on state, municipal and county asphalt overlay projects throughout Oklahoma. It also does some work in Texas and Kansas. Kerl joined the company full-time approximately four years ago and is the vice president.

“Overlays account for close to 90 percent of our total workload,” Kerl estimated. “The rest is some new road construction and a little grade stabilization. Oklahoma Department of Transportation jobs have been our bread and butter for the past few years.”

That's somewhat been the case since Ashley's father, J.R. Adams, founded the company, along with some partners in the early 1960s, that would later become Highway Contractors. Known then as J.R. Adams Inc., its mainline offering was excavation. During its early years, the firm helped construct several miles of Interstate 40 across Oklahoma.

Mike Potter, production superintendent, started as an operator with the company in 1973 and witnessed its transition from earthwork to asphalt. Nearly a decade after Potter joined the company, Highway Contractors purchased its first asphalt plant, which is still in operation today at its Guymon headquarters. The business also has a portable plant that it moves on-site for projects with a sizeable amount of asphalt.

“It went from dirt to soil asphalt first,” Potter recalled. “That was back before hot mix. We did a lot of chip sealing and progressed from that to hot mix throughout the course of a few years, and that's been our main offering ever since.”

Eventually, a change to the Highway Contractors name occurred in addition to a shift in ownership. In the mid 1970s, J.R. and his wife, JoAnn, became the sole owners of J.R. Adams Inc. They would sell it to another individual who ran it for just a few years before JoAnn bought it back in 1979.

Around that time, J.R. became ill and had to step away from daily operations — he passed away in 2000. JoAnn began building it up again in the mid-1980s with the help of longtime staff member George Davidson, who was known as “Junior.”

“Because Highway Contractors was a small woman-owned company at the time, it was considered a DBE [Disadvantaged Business Enterprise] in Oklahoma and Texas,” Adams said. “That special designation helped in bidding certain projects. Within a few years, however, she and Junior had grown it to a point where that was no longer the case.”

Ashley and Junior bought shares in the firm in 1998, and they operated Highway Contractors with JoAnn until she passed away in 2013. Davidson died a couple of years later, and Jake purchased his shares. Now, Adams handles billing, accounts payable and other inside items while Kerl runs the field operations.

Highway Contractors has several other long-time staff members. During peak season it employs around 30, including Jim Ellison, general superintendent. The company is able to keep about half of its workforce when work slows during the winter months.

The company typically operates within a three- to four-hour drive of Guymon, which is located in Oklahoma's panhandle. Recent projects took a crew into Texas where it completed a 77,000-ton overlay on Highway 54 from Texhoma to Stratford. 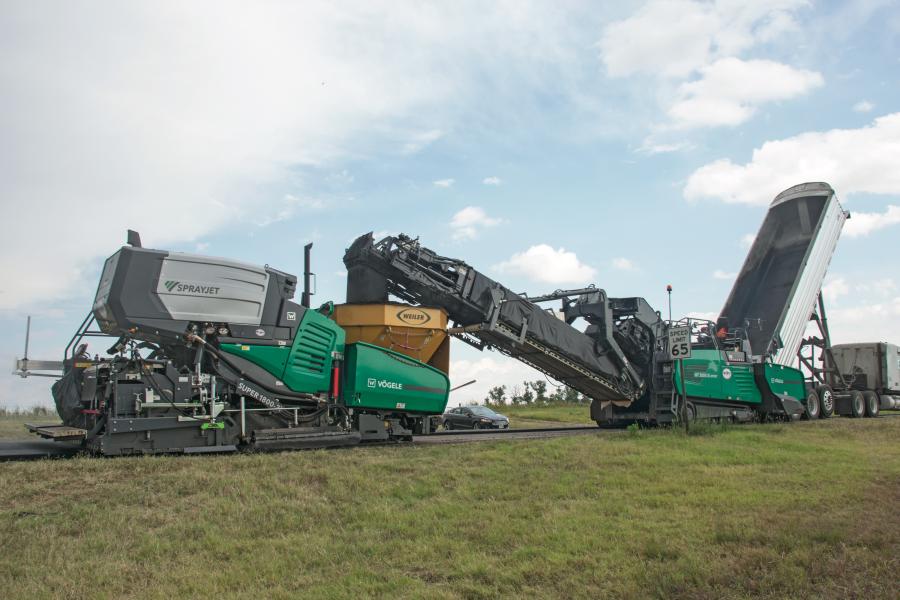 In western Oklahoma, Highway Contractors finished three jobs on Highway 183 near Taloga that together totaled nearly 150,000 tons of material. The company set up the portable plant on the outskirts of town and put it into action along with a brand new Vögele Super 1800-3i SprayJet paver — a Wirtgen Group product that it purchased from Kirby-Smith Machinery with the help of Britt Stubblefield, territory manager.

The unique 170-horsepower (156 hp in ECO mode) Super 1800-3i SprayJet can be used for paving thin asphalt overlays as well as for conventional binder and surface courses. With this machine, operators can spray a thin layer of tack and go right over it with asphalt.

“The SprayJet eliminates the need for a distributor truck, so it's more efficient and cost-effective,” said Ellison. “It's cleaner, too. Normally, you would have to put the tack down and wait for it to 'break' or set before paving on top of it. That's usually a 30-minute wait, and during that time people are walking through it or cars drive over it because the truck sprays into the open lane of traffic.” 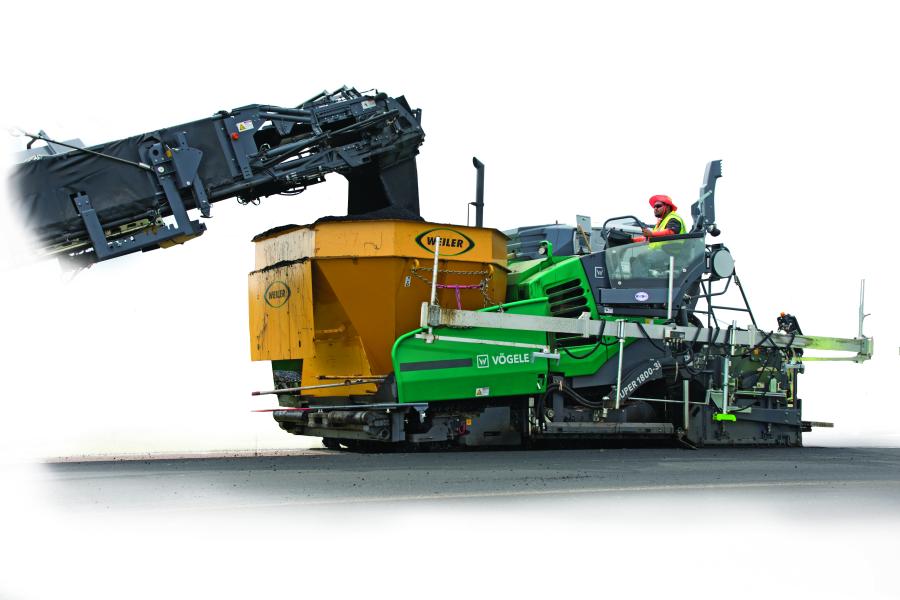 The Super 1800-3i has a maximum spray width of 19 ft., 8 in., with the emulsion tank holding up to 550 gal. It paves up to the same width and can go to nearly 30 ft. with extensions. The hopper capacity is approximately 14 tons.

“It's very user-friendly, so it didn't take long for the crew to learn the features and how to operate it effectively,” explained Kerl, noting that a Wirtgen Group rep came to the paving project and provided training. “It replaced a fairly new paver, and what we noticed right away was how straight it runs compared to the competitive brand. It seemed like our operators were constantly having to oversteer that one, where the Vögele paver holds its line.”

Highway Contractors used the Super 1800-3i SprayJet in tandem with a Vögele MT3000-2i Offset PowerFeeder material transfer feeder it rented from Kirby-Smith and Stubblefield. The company occasionally rents a Wirtgen stabilizer as well and has purchased several Komatsu products, including WA470 and WA380 wheel loaders and a GD655 motor grader it uses for “light-duty” dirt work such as knocking down shoulders and trimming grade. 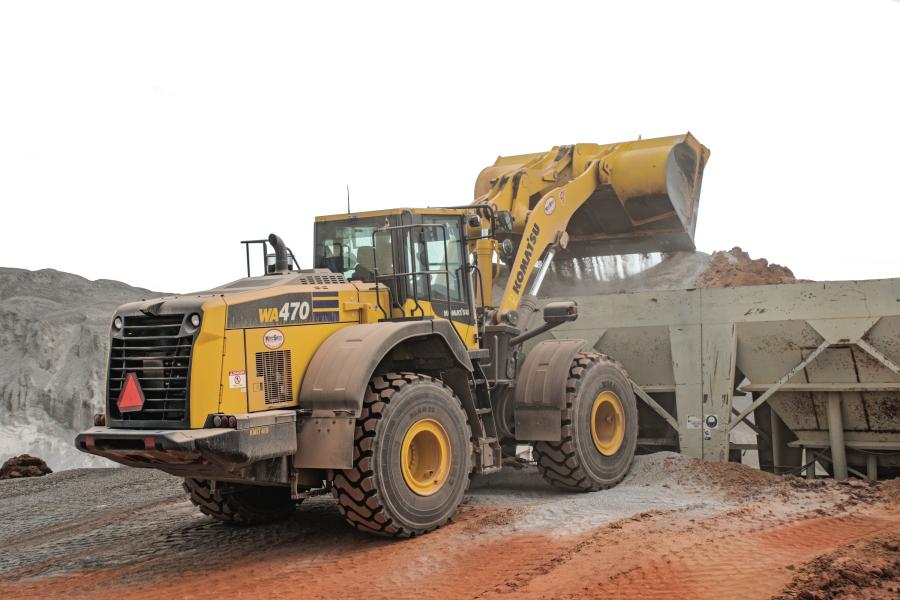 “Komatsu gives us great value at a fair price,” said Potter. “We have had the WA380s for a while, but we now have a bigger dryer on our portable plant than when we bought those, so we went to the WA470. Our operators don't have to dig into the piles as often and can feed the plant faster, so it's reducing cycles. That equates to less wear and tear as well as reduced costs.”

In addition to Wirtgen Group and Komatsu machinery, Highway Contractors has purchased and rented Trail King trailers and other products from Kirby-Smith.

“I remember my parents talking about their friendship with Ed Kirby's parents,” said Adams. “Kirby-Smith and Britt are outstanding to work with. Anytime we have needed something, they have been right there to take care of us. We appreciate everything they do.”

Highway Contractors works one job at a time, and the owners would like to see the number rise.

“With the right circumstances and opportunities growth is a possibility,” said Adams. “I'd like to add a second crew and another portable plant within the next few years. I believe it's possible, and maybe even probable, especially with Jake's ambition.”

Another probability might be branching out into other markets.

“We have talked about having a dedicated crew for work such as parking lots,” said Kerl. “Our current fleet of equipment is highway-class, so we will need to invest in some smaller machinery. It's definitely under consideration.”