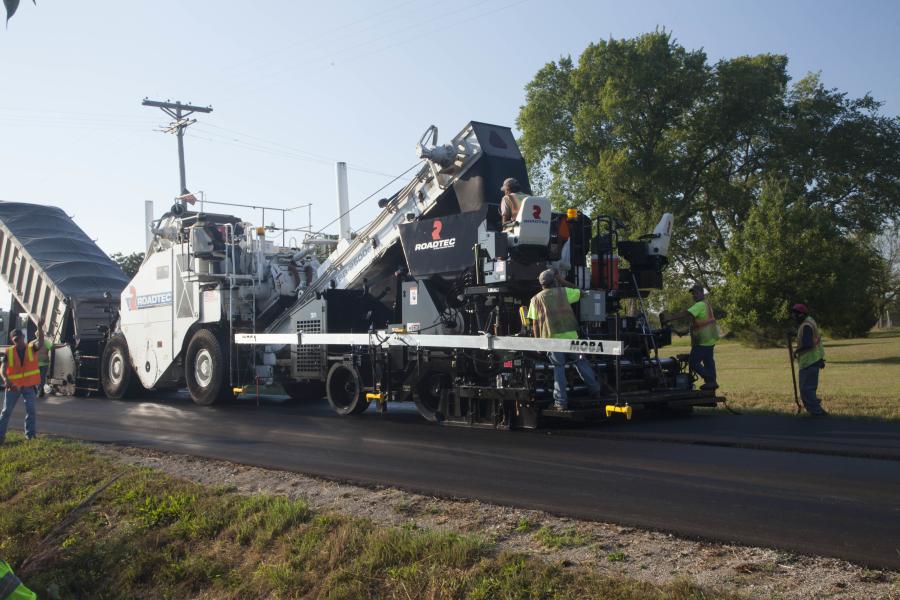 The project section of U.S. 62 is special because the road was built in 2000 when ODOT was switching from conventional HMA to Superpave.

A 7.5-mi. (12 km) section of U.S. 62 in Oklahoma recently received a rehab. The Oklahoma Department of Transportation (ODOT) project started in Blanchard, Okla., and headed west. Blanchard is part of a rapidly growing area of northern McClain and Grady counties known as the “Tri-City Area” with Newcastle and Tuttle.

The project section of U.S. 62 is special because the road was built in 2000 when ODOT was switching from conventional HMA to Superpave. The contractor back then was getting used to Superpave and the mix used was too low on oil. Superpave was originated from a Strategic Highway Research Program (SHRP), an initiative whose mandate was to improve materials, selection and mixture design by developing what became known as the Superior Performing Asphalt Pavement System or Superpave.

Unfortunately, the road did not last as well as anticipated — it showed premature wear and deterioration, which necessitated its replacement. In addition, the area where this section of U.S. 62 is located has experienced population growth so the road is receiving a greater traffic load.

“A good 97 percent of our work is roadwork,” stated Mike Boatman, general superintendent with Markwell Paving. “The U.S. 62 project is exactly the kind of work we do best.”

“The ride quality road of the road had deteriorated and required a two-inch milling depth to establish a base,” Boatman said. “We used a five-worker milling crew to complete the road milling portion of the project.

“The milling was a bit of a challenge,” said Boatman. “I was glad we were running a good cold planer — Roadtec makes the best milling machines I've found on the market.”

On its paving team, Markwell Paving had a crew of eight. They placed a 2-in. (5 cm) lift of a locally-sourced RIL (Ridge Intermediate Layer) course directly on top of the uniformly level milled surface. This 14,000 tons (12,700 t) of base course contains more oils and additives to bind the milled surface with the top two layers of HMA.

“The RIL mix is very finicky to work with as far as ambient temperature,” said Boatman. “Weather delays we experienced on this project were pretty much during the RIL paving due to temperatures falling outside the material's application comfort zone.”

The paver works in tandem with a Roadtec SB-2500e Shuttle Buggy material transfer vehicle (MTV), which provides a steady flow of HMA to the paver. The Shuttle Buggy's remixing action is designed to reduce thermal and/or material segregation problems.

ODOT has studied and tested the thermal cracking resistance of the Oklahoma S4 and Oklahoma S5 HMA mixes and found them to be stiffer, as indicated by higher creep compliance and indirect tensile strength values. Markwell Paving used the HMA mixes specified by ODOT to meet their requirements.

ODOT smoothness requirements are stringent. With a straight-edge test, there can't be more than a 1/8th-in. variance in a 10-ft. (3 m) section.

“We beat the ODOT smoothness test and have paved what I'd argue is likely the smoothest section of U.S. 62 in its entirety,” Boatman stated. “We understand that 40 percent of our ability to do so well on a paving job is the equipment and the Stealth is clearly the significant contributor. And the other 60 percent is the crew — we have exceptional, experienced people.

“The Stealth paver has been tremendously productive for us. We have four different guys that can run the Stealth — they all love it. Every project we've used this paver on, we've achieved the bonus. Our Stealth is the first Tier IV e-series model Roadtec sold — serial number 3001. We literally bought it off the display floor at ConExpo 2014. The only modification we made was to change the screed to a Roadtec Eagle Screed.”

With Markwell Paving being the first to buy the gravity-fed Roadtec SP-100e Stealth paver, it begs the question why? What sold them on the Stealth?

“There are three reasons why buying the Stealth paver was for us a no-brainer: First, savings. The initial purchase price is substantially lower than a conventional paver. The ownership costs are lower — fewer moving parts means less maintenance. Plus, there are lower fuel costs — the Stealth's fuel savings are tremendous.

“Second, the machine is easy to operate, can be operated from either side of the paver, which makes it visually easy to remain on top of the job.

“And last, we get higher production because of the machine's large 20-ton capacity hopper holds a full load from a 10 wheeler and we have faster production. The typical daily production with conventional paver is 1,500 to 1,800 tons per day — with the Stealth we've laid down as much as 3,000 tons in a day.”

As the U.S. Route 62 highway rehab project comes to its end, Mike Boatman reflects on what will be his biggest takeaway from the project — the smoothness of the finished mat.

“Driving the 7.5 mile stretch of Route 62 that we worked on should make any of us with the company feel proud of the work we've done. It is definitely the smoothest road in this part of the country.” CEG