The old Tappan Zee bridge is no more after crews demolished it into the Hudson River the morning of January 15. The span was supposed to come down on January 12, but high winds caused crews to reschedule, NYup.com reported.

To bring the bridge down, experts put a series of charges on the span's vertical support structures, which brought what was left of it down into the Hudson River, away from its main navigation channel, NYup.com reported. The result was a single "boom" reminiscent of a set of fireworks as the span fell into the waters below. 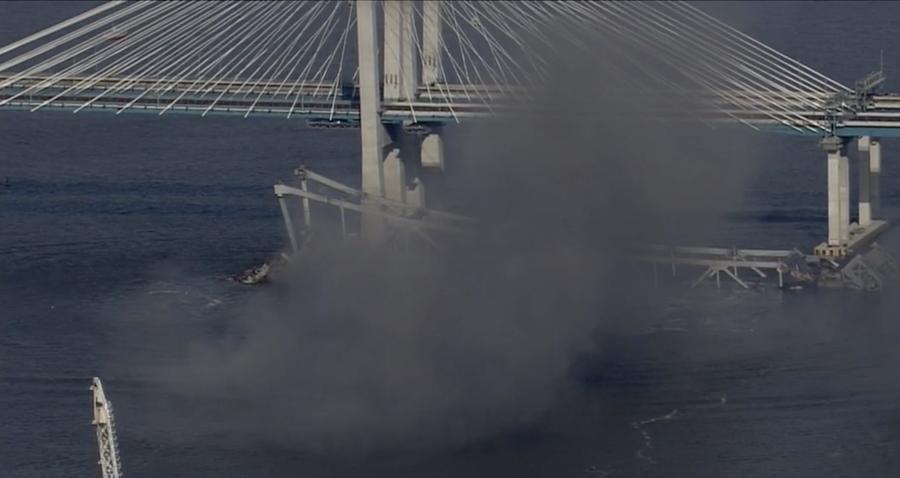 "The old structure will fall into nets that are held up by buoys," Piermont Police Chief Michael O'Shea told ABC 7. "The Hudson is deep. It's a major shipping lane for all kinds of cargo. We want to keep everyone safe."

According to a fact sheet, once the span was safely lowered into the water, marine salvage experts would begin removal work in the weeks to come. Chains supporting the salvaged portion in the water will allow crews to put it onto barges so it can be removed from the site.

Tappan Zee Constructors, the group responsible for the construction of the new Gov. Mario M. Cuomo Bridge, as well as the demolition of the Tappan Zee, hired Controlled Demolition Inc., of Baltimore, to perform the demolition, and Resolve Marine Group, of Fort Lauderdale, Fla., to do the salvage work.

The old span was supposed to be dismantled piece by piece, but had been deemed unstable back in September 2018, when crews reported hearing a loud "pop" the evening before the Gov. Mario M. Cuomo Bridge was set to officially open. Upon further investigation, engineers determined that there was a problem with two joints on the east anchor span, which prompted officials to delay the opening of the new bridge for a few days, and look into demolition options.

The biggest bridge construction project in the state's history, the Gov. Mario M. Cuomo Bridge, which sits right next to the old Tappan Zee Bridge, is a 3.1-mi. twin span cable-stayed bridge that has angled main towers, according to the Tappan Zee Constructors website. Contracted for $3.14 billion, the bridge contains:

Although the old Tappan Zee Bridge is no more, it lives on in other projects: In 2018, CEG reported that Burke Construction of Ocean, N.J., was using pieces of the old bridge to build up a 35-acre site situated on the banks of Arthur Kill, which flows into the Raritan Bay in Perth Amboy, N.J.

According to Owner Jason Burke, his crews will use every piece of concrete available from the old bridge for the site—and the 180,000-ton span will only provide enough material for a quarter of the area.