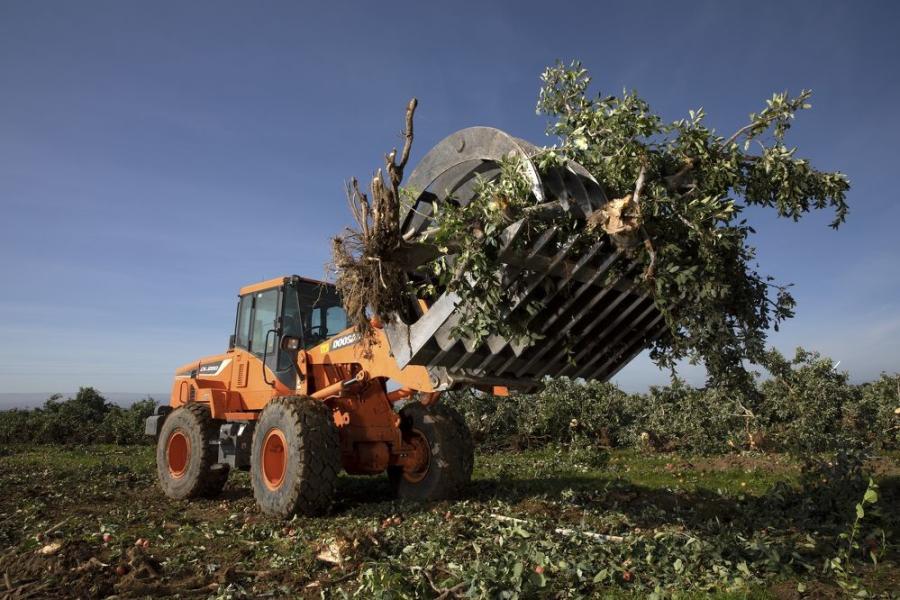 Ziemke uses the two DL250-5 wheel loaders to pick up trees and transport them to a grind or a burn pile. One wheel loader is equipped with an optional rearview camera for better visibility on the farm, while the other has a high-lift option to easily load the material into high-sided trucks.

Situated approximately 60 miles southeast of Mount Rainier, Wash., is the Yakima Valley, a breathtaking agricultural region known for its apple, wine and hop production. The Yakima Valley has the largest variety of fresh grown produce in the Pacific Northwest because of local farmers and growers like Brad Ziemke, owner of Ziemke Farm Fresh Produce.

Farming wasn't Ziemke's first profession, but it was one he was always interested in. After a few years working at a lumber mill in Renton, Wash., he decided he needed a change.

"I had been there for three years and was the second-highest-paid worker in the mill, but I felt like the lumber industry was going south and the job was a dead end to me," Ziemke said. "So, I ended up quitting."

Ziemke drove to Yakima, Wash., in his pickup truck, bought a bin of apples and cherries and started selling fruit on the side of the road. In three short years, business was booming, and he had five produce stands throughout Seattle and Tacoma, Wash. But, after a few years, he had a difficult time getting farmers to supply his stands. As a solution, he decided to buy a farm to grow the fruit. 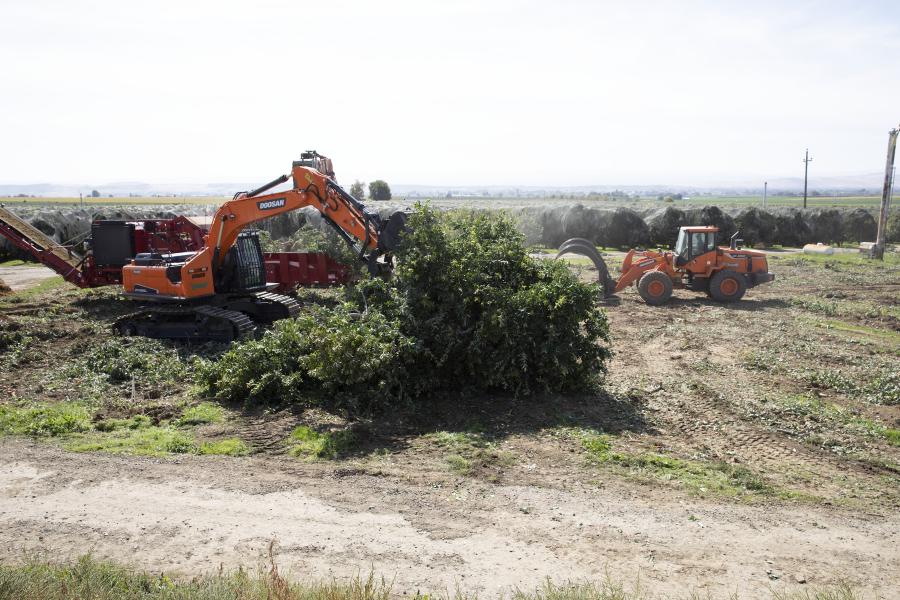 "Honestly, I was working myself to death driving back and forth between my stands," Ziemke said. "I decided that I enjoyed farming more than the stands, so I closed them and started exclusively farming."

Ziemke began farming a few acres as a hobby for himself and to provide produce for his friends and neighbors, but it quickly turned into a full-time business.

"About five years ago, I wanted to find a way to keep my guys busy year-round," Ziemke said. "So, I decided to get into the orchard removal business in addition to growing produce. There was a need for it in the area, and now it's a full-fledged business. It's really ballooned into something quite substantial."

Today, Ziemke has six employees and farms 150 acres of vegetables, including cucumbers, peppers, tomatoes, as well as fruits like apricots, cherries, peaches and nectarines. The produce is packed and sold directly from the farm to local grocery stores and produce stands around Idaho, Montana, Oregon and Washington.

"We typically have five or six jobs going on every day," Ziemke said. "We stay busy."

To keep up with his expanding business, Ziemke decided to upgrade his heavy equipment fleet and met with his local equipment dealership, Feenaughty Machinery. 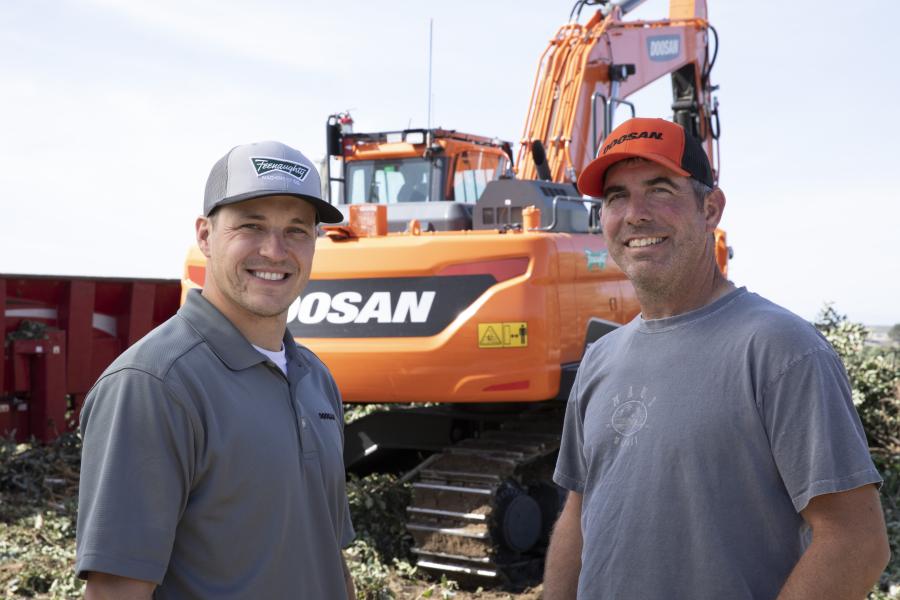 "When we started looking for a new excavator, we looked at many manufacturers," Ziemke said. "We don't build roads or work in construction, so we had to have the right equipment for orchard removal. I was weary of trying a new brand since buying a machine is a sizable investment. However, when I came across the Doosan equipment brand I took a chance. Now, much of my equipment is orange. Orange has become my color, even my pickup is orange."

Ziemke owns three Doosan crawler excavators — a DX225LC-5, a DX180LC-5 and a DX180LC-3 — and two DL250-5 wheel loaders. Both the excavators and wheel loaders are used with attachments for efficient tree removal.

"When I started using Doosan equipment, I realized how much more productive I could be with a bigger machine," Ziemke said. "I didn't realize I needed a machine bigger than the DX180LC-3, but since I bought the DX225LC-5 it's made my job a whole lot easier."

Since using Doosan equipment, Ziemke has been able to easily keep up with the increasing demand.

"After bidding out a job we go in and take the DX225LC-5 or DX180LC-3 equipped with a grapple attachment," Ziemke said. "Our excavators can pull four to eight acres a day, depending on the size of the trees and the terrain. Plus, pairing the excavator with a grapple attachment allows me to pick up and carry three times the amount that I had been."

On average, Ziemke and his team are taking out three or four rows of apple and cherry trees and rolling them into one windrow. A windrow is a line of material heaped up using a machine.

Ziemke uses the two DL250-5 wheel loaders to pick up the remaining trees and transport them to a grind or a burn pile. One wheel loader is equipped with an optional rearview camera for better visibility on the farm, while the other has a high-lift option to easily load the material into high-sided trucks.

The decision to grind or burn the material is up to the farmers and Ziemke and his crew.

"Grinding is considerably more expensive for farmers," Ziemke said "But, there are no permits or regulations when grinding material. We can usually move and grind about 10 acres a day. However, there are some strict regulations on burning. We have to go in and push, pile, and pile, burn and then come back 30 days later to remove the debris. Most of the time we are grinding the material since it's more environmentally-friendly."

Once the crew grinds or burns the material, they use another brand of equipment to rip out the roots and to disk the ground. Then the ground is ready to replant in the spring.

While orchard removal is the company's primary job, Ziemke also uses his equipment year-round around his farm for tasks such as building a greenhouse and digging irrigation ponds.