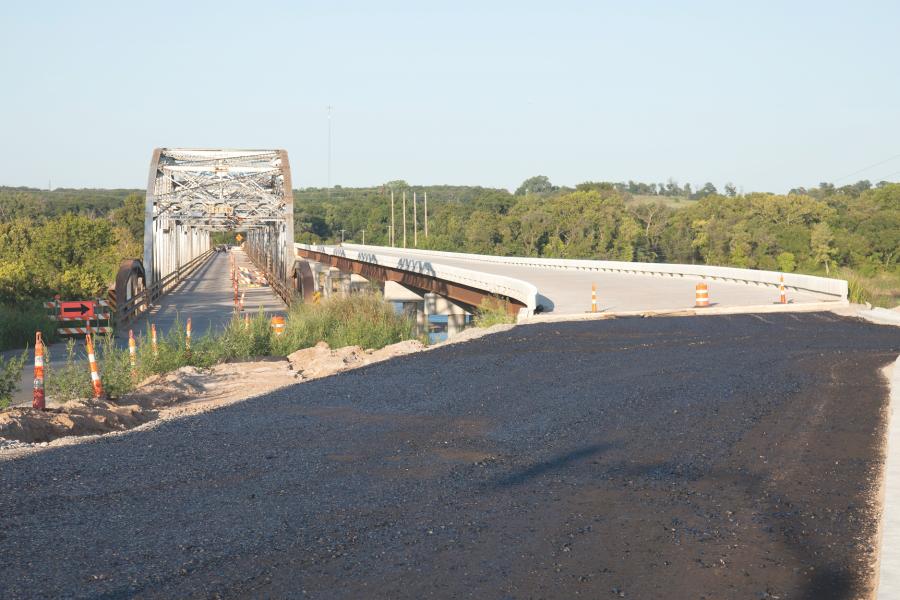 Highlights of the Oklahoma Transportation Commission's Aug. 7 meeting include a presentation on the Oklahoma Department of Transportation's new system for inspecting bridges after earthquakes, an update on improving bridge conditions and approval of contracts to replace a U.S.-412/U.S.-64 bridge near Keystone Dam in Tulsa County and rehabilitate bridges on SH-117 in Creek County and U.S.-69 in McIntosh County.

Commissioners heard a detailed presentation on ODOT's implementation of ShakeCast, a software program that uses state bridge and seismic data to help crews perform bridge inspections quickly and efficiently after earthquakes. Previously, ODOT crews were checking all bridges within a pre-determined radius of an earthquake's epicenter. Now after an earthquake, ShakeCast will automatically generate a priority order for bridge inspections based on several factors including bridge condition, age and proximity to an earthquake's epicenter, seismic movement data and magnitude rating.

Engineers with ODOT have noted that Oklahoma's bridge infrastructure has withstood the increased number and severity of earthquakes in the last several years. Cosmetic damage was found after the 5.8-magnitude Pawnee quake in September 2016 and minor damage to U.S.-62 pavement occurred during a 5.6-magnitude earthquake near Prague in 2011.

“Ten years ago, we knew that Oklahoma had some of the worst bridges in the nation,” Patterson said. “Additional dedicated state funding for transportation since 2006 and the work ethic of this agency have helped us make huge improvements by replacing or rehabilitating thousands of bridges.”

The commission voted to award a $7.5 million contract that includes financial incentives for early completion to replace the U.S.-412/ U.S.-64 bridge over SH-151 near the Keystone Dam in Tulsa County. The structure has required 12 emergency repairs to the bridge deck since 2014. The commission also approved contracts for rehabilitation of several bridges, including SH-117 at Rock Creek in Sapulpa and U.S.-69 at U.S.-266 in Checotah and a county road near Oktaha.

Commissioners voted to award 15 contracts totaling more than $19 million to improve highways, roads and bridges in 12 counties. Contracts were awarded for projects in Alfalfa, Beckham, Cherokee, Cleveland, Coal, Creek, Custer, Haskell, Lincoln, McIntosh, Tulsa and Woods counties. A list of all awarded contracts may be found by visiting odot.org/contracts, selecting the July 2017 letting and clicking Go and then Award.

The eight-member panel, appointed by the governor to oversee the state's transportation development, awards project contracts for road and bridge construction every month. Due to the Labor Day holiday, the commission's meeting is scheduled for 11 a.m. Sept. 5.