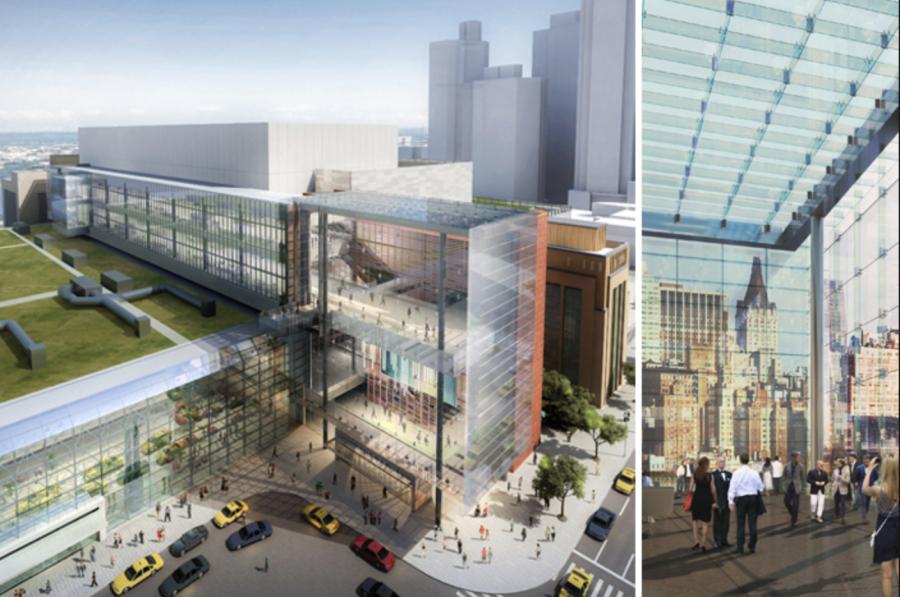 Howard Zemsky, Empire State Development president, CEO and commissioner announced the selection of the design-build team for the $1.5 billion expansion of the Jacob K. Javits Convention Center. Following a rigorous evaluation process utilizing five groups of technical experts, a blue-ribbon selection panel has chosen LendLease Turner as the design-build team that will coordinate and construct the massive project on Manhattan's West Side.

The panel's recommendation was approved by the Board of Directors of the New York Convention Center Development Corporation, a subsidiary of Empire State Development that owns the convention center's property and oversees major construction work at the facility. The project is expected to generate $393 million in new annual economic activity, reduce area traffic congestion and increase the efficiency of Javits Center operations to allow for new and expanded events.

“The Javits Center is one of New York State's greatest economic assets, and this project will turn this building into a 21st century marvel, a convention center of the caliber that New York deserves,” said Zemsky. “With these new state-of-the-art facilities, we will be able to attract the world's best conferences and events and drive economic activity throughout the region for decades to come.”

“For the past 30 years, the Javits Center has fueled the Empire State's economic engines, and thanks to Gov. Cuomo's vision, we will unlock this New York icon's true potential and host the most dynamic events anywhere in the world,” said Alan Steel, president and CEO of the New York Convention Center Operating Corporation, which operates the Javits Center. “With a recent renovation and a rapidly changing West Side neighborhood, there has never been better time to visit the Javits Center, and this new project will showcase our spaces to new audiences for generations to come.”

Under the winning proposal, the expansion will provide new, state-of-the-art exhibit and meeting room spaces to attract higher-spending, large-scale trade shows and conventions, while enhancing the quality of life for the West Side community. In addition, the construction of an onsite truck marshaling, loading and storage facility will relocate 20,000 event-related trucks off area streets each year, improving neighborhood traffic flow and pedestrian safety. As a result, the move-in and move-out process for events will be reduced by 30 percent, leading to an additional 20 days for new events and additional economic activity.

A blue-ribbon selection panel, comprised of government and industry leaders, received the committee's evaluations, and after thorough consideration, ranked the proposals and selected the winning bidder.

The six panel members were:

• Marilyn Jordan Taylor, professor of architecture and urban design and former dean of the school of design, University of Pennsylvania;

Following a vote by the board of directors of the New York Convention Center Development Corporation to approve the panel's recommendation, the contract was awarded to LendLease Turner. TVS is the design firm included in the LendLease Turner consortium. The winning proposal provided significant design, logistical and operational benefits, including increased atrium space, integrated public and support spaces and a commitment to maintaining current operations during all phases of construction. The expansion project will be funded through a combination of state appropriation and bond issuance proceeds.

• an on-site truck marshaling facility that can hold a minimum of 229 trucks that haul exhibit materials to and from the Javits Center;

• back-of-house and administrative space; and

The first phase of work, which will ready the site for the expansion, has begun, including critical utility work and the construction of a new three-story building that will house transformers, backup generators and other electrical equipment needed for the expanded convention center.

This first phase was the result of a request for proposals issued in September 2016, and following a thorough procurement process, Tishman Construction, an AECOM Company, was selected to oversee this work.

Overall, the expansion will strengthen the regional economy, create more permanent jobs and increase tourism and business involved with the Javits Center. This project also builds upon the progress of the building's recent renovation, which included the installation of new façade, flooring, mechanical and sustainability systems, as well as a 6.75-acre green roof that has become a sanctuary for area wildlife. Specifically, the expansion is projected to:

• generate $393 million in new economic activity a year; and

The Javits Center is the busiest convention center in the United States and hosted events on 337 days in 2015. Located on Manhattan's West Side on 11th Avenue between West 34th and West 40th Streets, the six-block facility encompasses 2.1 million sq. ft. (1.95 million sq m), of which 840,000 sq. ft. (78,039 sq m) is exhibition space. It hosts trade shows, conventions, and special events that spur economic activity and job creation.

In 2015, the facility hosted more than 175 events and two million visitors — ultimately supporting 17,700 jobs locally and generating an estimated 483,000 nightly hotel room reservations. In total, the Javits Center had an economic impact of $1.9 billion in 2015.