When work began to connect the Southern Parkway in southwest Utah, the staff with the Utah Department of Transportation knew the project came with its share of challenges and concerns. 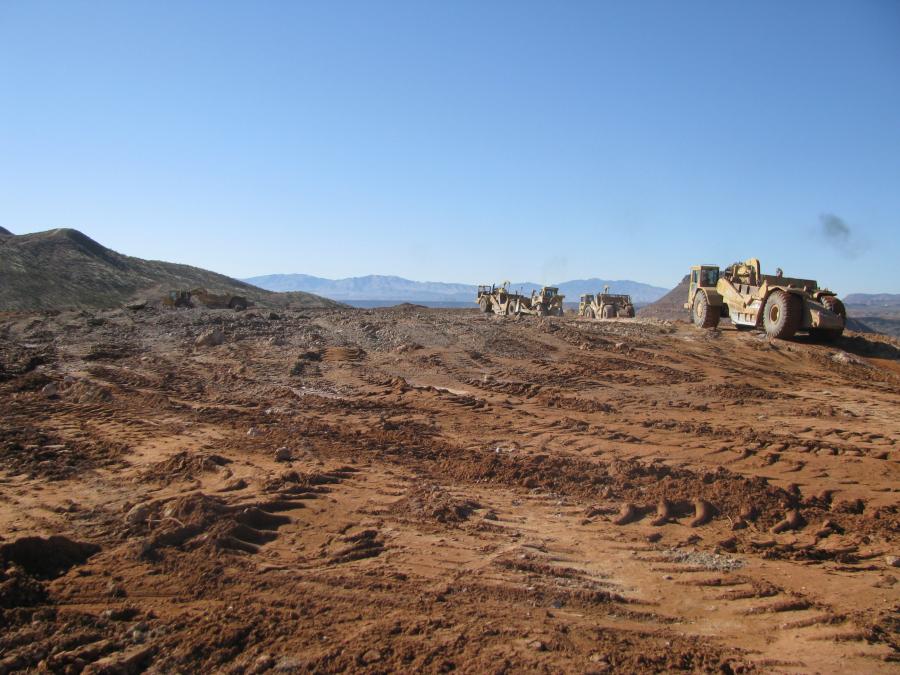 Workers went into the project prepared for important archeological finds.

When work began to connect the Southern Parkway in southwest Utah, the staff with the Utah Department of Transportation knew the project came with its share of challenges and concerns. There were a number of threatened or endangered wildlife and plant species that would have to be protected, and the terrain changed significantly and often over a short distance. But nothing carried near the import as the knowledge that just below the surface lay archeological treasures that made this anything but the usual construction job.

“We have found on this project the oldest known human habitation site in southwestern Utah,” said Dana Meier, project manager. “It's a really interesting job.

Work on the $175 million multi-segmented project has been ongoing for a decade, twice that time if you consider that the first feasibility study occurred in 1995. The environmental impact statement was completed in 2005 with work on the first segment getting underway in 2007.

Part of the purpose of the project was to provide a bypass to route major truck traffic off local roads and also to facilitate tourist and recreational traffic from California and Las Vegas to the Zion National Park, Meier said.

Workers went into the project prepared for important archeological finds.

“We were real conscious of that,” said Tracy Munson, field engineer. “We used specialized equipment. On most of the significant finds, we had an archeologist on site and they had a team surveying, watching the work. They were able to keep everybody well informed and answer all the questions we had. We limited the areas we knew were extremely sensitive to one or two of the best operators so they could take care and time needed.”

And, added Meier, they took only six inches of soil at a time and very carefully removed the dirt layer by layer to minimize any damage to artifacts. One of the first significant finds came as workers were digging 12 by 400 ft. (3.65 by 122 m) trenches for a fault study.

“Out of one of those trenches, eight feet below grade, was a spear point sticking outside of the trench,” Meier said.

Perhaps the most significant find was a site documenting 1,000 years of continuous human habitation, from the Basketmaker era to the Pueblo Era.

“The fire rings were still intact,” Meier said. “The floors were intact. It was a whole compound. We actually found human remains on the site. We had quite a bit of local press. Anything we find on projects, with exception of human remains, goes to Utah Museum of Natural History. We have requests from Chicago Museum of Natural History and the Smithsonian to exhibit some of the finds.”

As part of the project, the state created a native American cemetery, donating 15 acres to a local tribe so they can repatriate some of the remains found on the project.

“It's interesting, you have a large number of native American tribes in the area,” said Meier. “When you find human remains, they may not have ancestry within the local tribe. It may be a tribe in Nevada and New Mexico that have rights to the remains. We wanted some place private that would have easy access to it, but without a lot of public traffic. We did find the perfect location and donated it to the tribe and they were very happy to receive that.”

In addition to the need to be sensitive to the archeological significance, workers also had to work around or provide mitigation measures for the Painted Desert Tortoise, the Bearclaw Poppy, Burrowing Owl and the Southwestern Willow Flycatcher.

“There was one location where we encountered a tortoise where we didn't think we would find any,” Munson said. “We had to relocate it, as well as the plant species. You can pick up a tortoise and move it and it will survive. But you can't do that with a plant. Between the time of the environmental document and the time of construction, there were new plants that hadn't been there before. In the end, we had to change the alignment of the road.”

Crews also had to deal with changing terrain, including an area that went from flood plain to sandstone rock to full sand within a couple miles, Munson said. “It was a real struggle to handle that material. We used large mining equipment. We probably moved the most material in segments 3b and 4a with about 3 million cubic yards between the two. We used an articulating mine truck, and did quite a bit of blasting. It was a lot of trial and error.”

There also was a question with the U.S. Army Corps of Engineers as to who has jurisdiction over washes.

“Most people think the Army Corps just deals with streams and wetlands,” Munson said. “We had a discussion about washes. We requested jurisdictional determination and they came up with a ruling and it went to a courtroom judge. The end result was they have jurisdiction over washes that cross state boundaries. Washes that originated in Utah were not jurisdictional.”

When the current segment is complete, there will be 20 mi. (32.18 km) of continuous highway. Two segments remain, but are unfunded.