In lieu of wielding shovels, officials symbolically removed several seats from the historic Harrison Auditorium, in preparation for renovations to that public programming space. 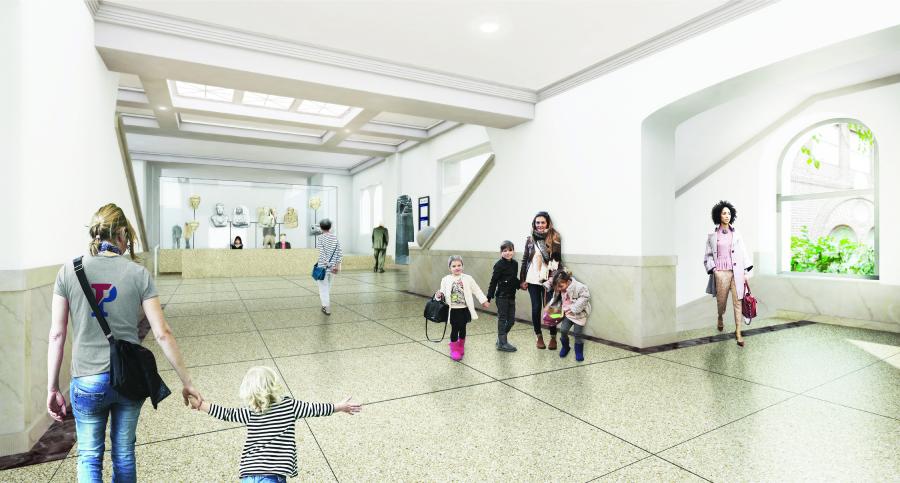 University of Pennsylvania photo In the construction project kicking off Nov. 1, with scheduled completion in summer 2019, the Main Entrance Hall will be completely transformed.

The Penn Museum (University of Pennsylvania Museum of Archaeology and Anthropology) in Philadelphia kicked off a major renovation that will dramatically transform its Main Entrance Hall, make its historic building fully accessible to all, add significant visitor amenities and renovate and add air conditioning to the historic Harrison Auditorium and surrounding galleries. The construction project is a major element of the museum's Building Transformation campaign, to be announced next spring, that also will encompass the reinstallation of most of the 130-year-old museum's signature galleries and educational and public programming — to welcome visitors of all ages, from around the region and across the globe.

The announcement was made at a construction groundbreaking event with a twist — in lieu of wielding shovels, officials symbolically removed several seats from the historic Harrison Auditorium, in preparation for renovations to that public programming space.

“At the Penn Museum, we are letting in the light, in every way imaginable. A dramatic reconfiguration of the museum — the first in nearly a century — will illuminate the story of humankind found in our galleries, while interactive technology will animate the objects which trace that narrative through our peerless archaeological and ethnographic collections,” said Amy Gutmann, president of the University of Pennsylvania. “Adults and children alike will experience the thrill of discovery and gain a deeper understanding of history, and their place in it.”

“The Penn Museum's mission is to transform understanding of the human experience,” noted Julian Siggers, Penn Museum Williams director. “With our spectacular international collections, nearly one million objects from all over the world, and our ongoing leadership role in research and discovery, the Penn Museum is poised to take its next step and become a world heritage destination in America's first World Heritage City. We are building transformation — through significant building renovation, new signature galleries, and new programs — to make that dream a reality.”

A new website — penn.museum/transformation — will provide updates throughout the process. Museum visitors will be able to watch the transformation in real time as new Signature Galleries, architectural enhancements, amenities and programming are added.

In the construction project, which kicked off Nov. 1, with scheduled completion in summer 2019, the Main Entrance Hall will be completely transformed, opening staircases closed for more than a century, bringing light in and creating a new gallery space that visitors will see as soon as they enter. The museum has a $21 million dollar budget for this project, according to Pam Kosty, public relations director of Penn Museum.

The adjoining gateway to the Egyptian Galleries will be brightened with huge windows, and broadened to create new access to the galleries.

Visitor accessibility and amenities are high on the list of changes: two new elevators — one providing vertical circulation to all levels of the Egyptian wing and the other to the Harrison Auditorium and Third Floor Galleries — along with new public restrooms and a new shop location by the Pepper Mill Café, will improve ease of navigation and visitor comfort.

The Museum also will completely renovate the 1915 art deco-style Harrison Auditorium. New lighting, flooring and sound and audio-visual enhancements will transform the auditorium's programmatic capacity, while air conditioning and reupholstering the historic 1940s seats will add significantly to visitor comfort. The auditorium will reopen in late summer 2019 with 618-person capacity.

Central to Building Transformation is a series of new Signature Galleries, designed to tell the story of humankind as unearthed, literally and figuratively, by museum archaeologists, anthropologists, ethnologists, laboratory scientists and scholars over more than a century of fieldwork and research discoveries that continue today.

First to be completed will be a suite of new Middle East Galleries, opening April 21, 2018, with a “Golden Gala” preview fundraiser April 14.

Here the museum draws upon its own groundbreaking excavations and research that began in the 1880s — with America's first archaeological expedition to the Middle East — and continues today. Ten museum curators and scholars, led by Stephen Tinney, associate curator-in-charge, Babylonian section, working with Haley Sharpe Design of Leicester, U.K., share their expertise in this first new Signature Gallery, which tells the compelling story of humanity's nearly 10,000-year journey from small villages and towns to increasingly complex cities. The story will be told through 1,400 artifacts presented in 6,000 sq. ft. of refurbished gallery space. Video, touchable artifacts, and interactive stations will provide multiple avenues for engagement.

Additional Signature Galleries will come online in later phases, but the groundwork for them — including curatorial development, gallery design and extensive conservation of monumental objects — is well under way.

Among these additional Signature Galleries are new Egyptian Galleries. The museum's Egyptian collections reflect 5,000 years of cultural continuity and change, and include the largest ancient Sphinx in the Western Hemisphere, architectural elements from the only Pharaoh's palace outside of Egypt, and mummies, both human and animal.

The new galleries will set these materials and their stories in rich new context and display the monumental palace elements at full height for the first time. Also planned are new Asian Galleries in the towering rotunda and adjacent spaces, as well as two crosscultural galleries exploring important themes: a new Crossroads of Cultures Gallery with a focus on international trade connections in ancient Israel and the eastern Mediterranean, and a long-awaited Writing Gallery to explore that most human of all activities, across cultures.

In all, the new Signature Galleries, showcasing the many strengths of the museum's international collections, will fill more than 44,000 sq. ft. of reinstalled exhibition space.

For the Middle East Galleries, the first of the Signature Galleries, Haley Sharpe Design, of Leicester, U.K., is leading gallery design. Exit of Philadelphia is designing comprehensive wayfinding and signage.